Mike Gallagher
|
Posted: Jun 22, 2016 12:01 AM
Share   Tweet
The opinions expressed by columnists are their own and do not necessarily represent the views of Townhall.com. 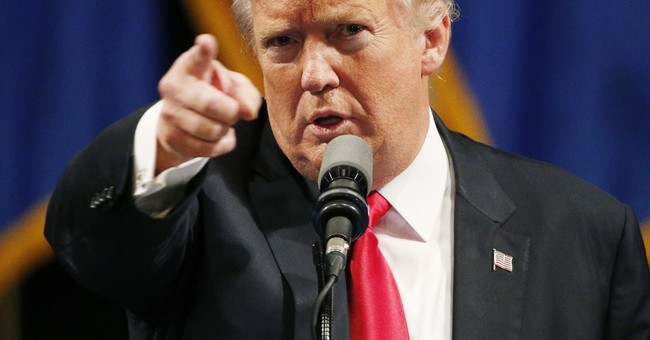 My inbox was filled with excited emails from fellow Republicans reveling in the rough patch that Donald Trump seemed to be experiencing. “He’s finally done!” one exclaimed. “We tried to warn you guys of the catastrophe of Trump” said another. And this gem: “I’m so glad I refused to board the Trump Train now that it has officially derailed.” Never mind that every poll has Trump within striking distance of Mrs. Clinton or the release of another survey showing that 25% of Americans are undecided. These guys are convinced - for the umpteenth time this year - that it’s all over for the remaining Republican candidate.

For people who never tire of telling the world what a moral high ground they’ve taken in opposing Donald Trump, they sure don’t seem to mind offering up a bellyful of gloats and taunts.

The news that Trump’s campaign coffers are dwarfed by Hillary’s and that Corey Lewandowski is out as campaign manager is being received with delighted satisfaction by many of those who are still miffed at the record-setting number of primary voters who picked Trump over the rest of the GOP field. But try asking many of these so-called “Never-Trumpers” why they persist when they have to know that failing to elect Trump will result in Clinton becoming commander-in-chief (shudder), and they fail to come up with a substantive answer. “I plan on writing in a third party candidate” they offer. Or, “I’m just going to stay home on Election Day; now that’ll show ‘em!” is another perplexing response.

Some of them, notably Bret Stephens of the Wall Street Journal, are perfectly willing to admit their preference for Clinton over the Republican. Electing her would be the best outcome for conservatism in 2016 since Trump is no conservative, he wrote. But most, undoubtedly mindful of the Constitution, our sovereignty, or any of the other things she’d eliminate faster than a cache full of emails, are unwilling to take that plunge. So they’re left dithering about their righteous and indignant opposition to the man while refusing to own the ominous outcome of their position.

It’s time for them to come clean.

In 1972, former Texas Governor John Connally led “Democrats for Nixon.” A Democrat who had been JFK’s Secretary of the Navy, Connally believed that as many as 20 million Democrats would cross over to vote for Nixon because George McGovern wasn’t qualified to lead the nation, particularly because of his proposals for military cutbacks.

I suggest a similar path for Republicans unwilling to support Mr. Trump. Instead of wallowing in limbo over who should actually be elected the next president, they should admit, once and for all, that their efforts are only going to help get Hillary Rodham Clinton the keys to the White House (again). They know full well that their petulant behavior and unwillingness to accept the will of the millions of people who voted for Trump to represent them only serve the interests of the Democrats who want another 8 years of Barack Obama’s ideology.

And I ask fellow Americans who continue to be mystified at the destructive efforts of some of their former allies in the Republican Party to borrow a page from history and call them what they are: “Republicans for Hillary.” Never again will I call them part of the Never Trump movement. This game of pretending that to be Never Trump doesn’t lead to a President Hillary Clinton has to end.

Donald Trump is clearly the underdog in this race. Just about every organized institution has thrown everything it has at him. And they won’t stop until they get their wish, that Hillary Clinton will be sworn in on January 20, 2017.

May those of us who respect the will of the people and have a realistic view of the choice for president at least possess the ability to call political opponents by their proper name.

So “Republicans for Hillary” it is.