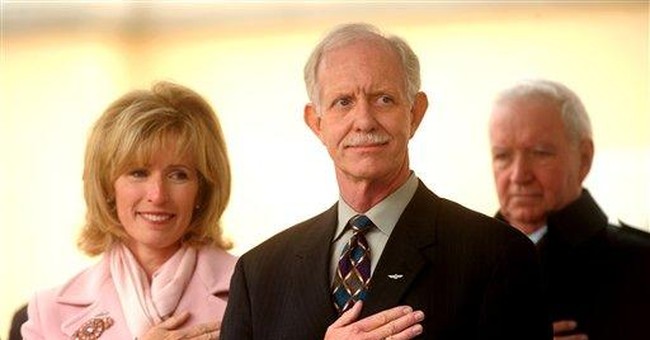 The headline in USA Today gave me a sinking feeling: “US Airways Gives Passengers On Flight $5000.00 Each -- Passengers Wonder, Is it Enough?”

Is anything ever enough anymore?

It is absolutely, positively inconceivable that anyone aboard the miraculous US Airways Airbus whose pilot made a safe water landing after birds were sucked into the engines would expect US Airways to fork over a ton of money to them.

This was one great story: a pilot makes a split-second decision to ditch into the frigid waters of the Hudson River, a decision that saved everyone on board from certain death.

But it didn’t take long for the vultures to swarm, the heads to spin with visions of big dollar signs, and the pure greed to hijack this otherwise-wonderful tale.

One disgruntled flier who got a bloody nose and some bruises says it’s still too early to decide just how emotionally distressed he is as a result of the incident.

“I just want to be made whole,” he sniffed to a reporter.

Already US Airways has written checks for $5000.00 apiece to each and every passenger to cover any and all “immediate needs” they may have from having lost their luggage and other belongings.

I’m a frequent flier who often travels with a laptop, nice headphones, even some partial radio equipment and I know that $5000.00 would more than cover anything I might lose on an airplane.

Furthermore, the airline has promised that their insurance carrier will cover any and all losses of property that exceed $5000.00.

Not good enough, some of these miserable people are saying.

Kreindler and Kreindler, a New York-based law firm that specializes in aviation accidents, reports that “several” of the passengers on the flight have already contacted the firm.

I wonder how long it took those folks to stop thanking God for His decision to spare their lives from what should have been a fiery, horrible end before they Googled the best law firm to sue the pants off US Airways?

I might be a lone voice in the wilderness on this, but I don’t think US Airways owes any of these people one red cent.

If a natural disaster like a flock of birds or a bolt of lightning causes a plane’s engines to fail, you know what should be expected? That the pilot will keep his or her wits about them and do their best to save each and every soul on board.

That’s precisely what Captain “Sully” Sullenberger and the rest of his crew did. They managed to bring a crippled plane safely into a river where everybody got out, safe and sound.

And now, people are grumbling that five grand just isn’t cutting it.

If big, fat settlements result from these greedy passengers or we see a slew of lawsuits filed, this should become the model for tort reform in America.

We simply have to reign in the piggish people and money-hungry lawyers who chase every ambulance they see and expect companies and individuals to pay for everything that goes wrong.

Even hinting about a lawsuit in this story smacks of a shakedown. People are savvy enough to know that simply a threat of litigation is tantamount to a nice, hefty check.

Really, this must stop.

By all accounts, US Airways has handled this entire accident with graciousness and compassion and class.

Anyone aboard US Airways Flight #1549 who considers suing the airline or strong-arming it for more money should be ashamed of themselves.

Karma can be a bad thing. After all, many of those people might want to take their ill-gotten gains and jet off to some exotic destination to celebrate. And if a flock of birds hits their plane again, maybe they won’t be so lucky.