Sarah Palin: A Wide Gap Between What Obama Says and What He Does 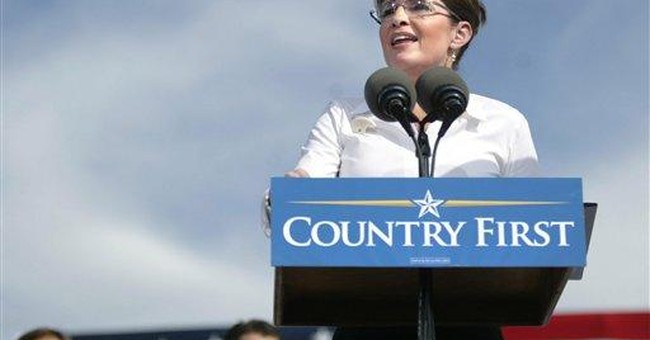 Gallagher: Let’s talk, governor, for just a moment about what I think is the sound bite of the entire campaign. This is the exchange that Senator Obama had on a rope line with a plumber in Toledo, Ohio of all places. This guy said, “Senator Obama I’m going to have a business that is $280,000 a year. You want to tax me. Why do you want to do that?” You’ve heard the audio, but governor, if you don’t mind, I want to play it real quickly for you:

Plumber: Your new tax plan is going to tax me more, isn’t it?

Obama: It’s not that I want to punish your success I just want to make sure that everybody who is behind you, that they’ve got a chance at success too. I think that when you spread the wealth around it’s good for everybody.

Gallagher: “When you spread the wealth around,” he said, “it’s good for everybody.” Governor, these are Senator Obama’s own words. You know, you don’t have to do a whole lot of preaching to Americans about what, I think, are radical ideologies that Senator Obama represents, right?

Palin: I think what he is representing there is the idea that we are going to punish hard work and productivity and those who want to contribute more and grow jobs and hire more people—that there would be a punishment there, because government would take more from you. John McCain and I want to reduce everyone’s taxes so that our small businesses, especially, can hire more people. That’s how jobs are created. That’s how we get our economy back on track. We want to reign in government growth and that redistribution of wealth principle. We want to make sure that all Americans are given a hand up, not a hand out, but opportunity for all.

Gallagher: Tonight, governor, a crucial debate for Senator McCain. The speculation seems to swirl around this awful, evil, radical, terrorist Bill Ayers whom Senator Obama has associated himself with for many years. It seems inevitable that Senator McCain has to get this out on the table, does he not?

Palin: I say so. I’ve called Obama on it, of course, because it’s very reflective of, I think, judgment— someone’s truthfulness also when you try to get to the bottom of it. Obama either knew the guy or he didn’t. Either you knew that you launched your political career in a domestic terrorist’s living room, or you didn’t. You see the truthfulness there in terms of not ever getting the scoop on what the relationship has been. That’s troubling. Tonight’s debate, it’s very, very important of course, and McCain, he’s going to show that he is the only candidate in this race who has ever really fought for the American people.

I’m sure Barack is going to do what he does best and he is going to have a lot of good, flowing, flowery words. But there is such a wide gap between what he says and what he does, what his record represents. John McCain is going to show, again, that he is the only candidate who has fought for the American people and the only candidate that has the courage to keep on fighting for Americans in this time of economic crisis and in this time (still) of war against the terrorists.

Gallagher: Governor, I know you have to run. A real quick footnote though on this debate: You went through it with Joe Biden. You had an extraordinary evening. Everybody just thought that you hit it out of the park. Is it overwhelming to try to absorb what has to be a staff of people and a mountain of information that everybody is trying to give to you? I mean, Senator McCain tonight, ultimately he has to be John McCain at some point. He is going to have to say, “Listen guys enough with all the advice and the notes and the critics I got to be—I got to do what I do best.”

Palin: You are so spot on there, Mike. And that’s exactly what you have to get back to, and that’s what I had to get back to also—walking out there in my debate saying, “Look, I know what my values are, what my principles are, I know how much I love this country—and I too will fight for this country.” That’s what McCain is going to do tonight also. At some point you do have to say, “Thanks guys for all the advice, and the notes, and the talking points, but let me get to the core values that I can articulate now.” And he will show that he is the fighter, that he will put his country first—not obsessive partisanship, not these very odd and troubling associations that Barack Obama has, but no get to the core values, articulate those and let Americans see who the real John McCain is.