It's Gettin' Ugly Out There 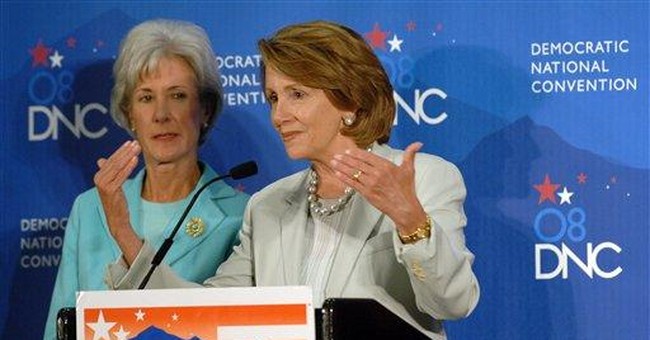 The Democrats sure have been busy this week. They have now dropped any pretense of civility or decency in this remarkable 2008 election season. Evidently, the selection of Sarah Palin as John McCain’s running mate has turned a number of Dems into rabid attack dogs.

Gone is the appearance of unity.

The act of campaigning with any sort of honor or respect has vanished from the Democrat playbook.

This campaign went from politics to blood sport a long time ago. Now, the Democratic Party voices are nasty, shrill and vile.

Consider what has taken place in just the past few days:

Leftist hackers invaded Gov. Palin’s privacy by criminally breaking into her personal email account; voyeuristic websites posted the private correspondence all over the internet. During an Obama campaign appearance, a bland governor from Kansas made the not-so-bland assertion that the reason the current polls are so close is because “one of the candidates” is half-black. While campaigning on one of the TV networks, Democrat Vice-Presidential candidate Joe Biden actually suggested that it’s high time that Americans stop being so unpatriotic by not wanting to pay higher taxes. And finally, the Democrat candidate himself urged his followers to start arguments and “get in (the) faces” of Republicans and independents.

As my kids would say, these Democrats have gone and jumped ugly.

Truthfully, ugly doesn’t even begin to describe what the Democrats are doing these days. When Gov. Kathleen Sebelius injects the stale, tired old claim that racism might just keep Obama out of the White House, don’t think for a moment that isn’t done with the total blessing of the Obama campaign. If Sen. Obama was sailing along with a 10 point lead in the polls, they wouldn’t be reduced to such babble. They’d at least pretend this election is about issues, ideology and truth.

They just can’t figure out how to tear down the genuine Republican enthusiasm over the McCain/Palin ticket. Is the excitement part of a GOP revolution? A renaissance, perhaps?

Too early to tell. But if John McCain wins, you can bet the farm that’s what everyone will be saying.

The Democrats are dumbfounded. And now, they’re just being dumb.

When I first heard the audio clip from ABC’s “Good Morning America” featuring Sen. Biden claiming that “it’s time to be patriotic...time to jump in, time to be part of the deal, time to help get America out of the rut” by forcing Americans who make over 250 thousand a year to pay higher taxes, I couldn’t really believe my ears. I know Biden can be a loose cannon -- just ask convenience store clerks with accents or Black Americans who would be (rightfully) offended at being called clean and articulate -- but not this nuts. Surely the Democratic VP candidate wasn’t stupid enough to claim that paying higher taxes is a form of patriotism, was he?

Not only did he say it once, but he has repeated the claim. He even angrily defended his comments at a union gathering later the same day.

I can just picture the next Democrat campaign billboard: “Get Taxed Through The Nose, Wave A Flag!”

I personally witnessed a number of the Democrat anarchists in St. Paul, site of the GOP Convention. The police there accurately described them as a bunch of dangerous criminals who were capable of serious vandalism, violence and even death. They sure do know the meaning of getting in one’s face.

How nice of Sen. Obama to encourage them to “get in (the) faces” of the loyal opposition. Real responsible.

If a looney Democrat beats an independent or Republican to death over the backyard picket fence, I wonder if Obama will feel bad?

It’s definitely turning ugly. And the Republican Party will be tested. Will we “jump ugly” and take the lefties on by degenerating to their level?

I truly hope not.

We’ll win this election on the strength of ideas and philosophy and moral clarity.

We’ll beat the failed Democrat policies of the past by invoking the true working class spirit of good and decent Americans who want to work hard, achieve success, and celebrate the sanctity of this, the greatest country in the world.

As painful as it is to witness the classlessness of Democrats, this is a process that has to happen. Millions of Americans are watching with their mouths agape, positively stunned that Barack Obama’s party could stoop so low.

Instead of hiding in the shadows, I’m thankful that so many Democrats are willing to expose their true sense of self.

This can only be great news for the Republican Party on November 4th.