Congress Should Worry About Its Own Business Not Baseball's 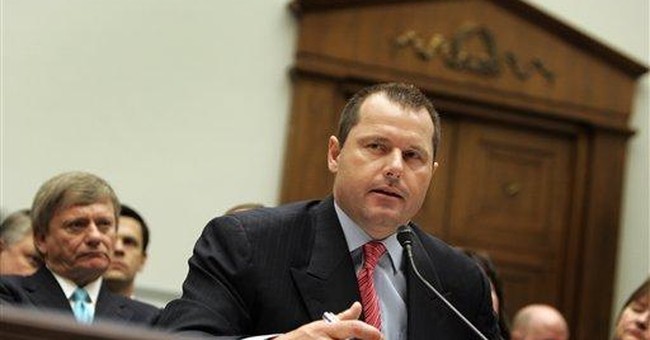 The headline in my morning paper was the height of mediocrity: “A Standoff Over Steroids.”

Edward R. Murrow would be proud.

Watching Congressman Henry Waxman interrogate baseball’s Roger Clemens this week was maddening. In the middle of a war, while the right to intercept electronic messages by our terrorist enemies is being thwarted by anti-war Democrats, as the economy lumbers down some shaky railroad tracks, and illegal immigrants continue to stream across the border siphoning social services from our local communities, a bunch of grandstanding Congressmen have decided to grind Washington, D.C. to a halt and decide if some pampered, spoiled millionaire baseball player is telling the truth when he denies having Human Growth Hormone injected into his butt.

In the grand scheme of life, I wonder how many taxpayers are on the edge of their seats wondering if some trainer named Brian McNamee is being truthful when he testified that Clemens is lying about his use of steroids and HGH.

It ranks right up there with concern about what Brittney Spears is going to do next in her train wreck of a life.

I’d like to believe that most of us have full enough lives that the personal habits of baseball players or pop divas don’t even register as a blip on our collective radar.

It’s one thing to see paparazzi (what a stupid word) stalk Hollywood celebrities like a bunch of crazed vultures and realize what a ridiculous environment could lead to such a debacle in la-la land.

It’s quite another to recognize that our tax dollars have funded this baseball/steroid three ring circus, a giant waste of government resources if there ever was one.

It’s important to make comparisons between the Brittney Spears and the Roger Clemens of the world because they are both in the exact same type of business: entertainment. Nothing more, nothing less.

Too many folks take the baseball steroid controversy seriously because they love their baseball. To them, it’s all about the records, the World Series, celebrating the great American pastime and all.

But baseball players play the game for one reason: our entertainment. They are our movie stars, our pop singers, our recording artists. We expect them to hit the ball, throw the ball, run the bases, and win games.

What grown men inject into their bodies in order to achieve our expectations of them should not only be of no significance to us, it sure as heck is no business of the U.S. Congress.

You want to have Congress hold hearings on baseball players using “performance enhancing drugs?” Okay, let’s keep going down this path. I’m waiting for Congress to drag The Rolling Stones’ Keith Richards before some pompous committee so he can testify as to whether or not he ever used performance enhancing drugs prior to one of the 50 thousand concerts he’s performed over the last 60 years or so.

Incidentally, the smart money says he has.

I’d like to see Amy “Rehab” Winehouse, the current toast of the recording industry, explain to Congressman Waxman how many drugs it has taken her to jump up on a stage and sing her songs.

The entertainment industry is full of alcoholics and drug addicts who often flaunt their habits in front of a jaded public.

If you want to fret about baseball players as role models encouraging kids to take steroids, worry more about the recording artists our children are emulating who would dismiss HGH as child’s play.

Cocaine, Ecstasy, heroin, angel dust – these are drugs a heck of a lot worse than steroids, with young people drawn to these killer drugs in far greater numbers than steroids.

Congressmen don’t really care about protecting young people from turning to steroids. We could hold congressional hearings on an hourly basis to try and detect how many people are cheating on their taxes, or which TV star is doing drugs, or whether or not our next door neighbor kicks his dog.

No, politicians love to pander. They enjoy showboating in front of the TV cameras; they like to pretend to be concerned about an issue like steroids in baseball that isn’t really any of their business.

At least there wouldn’t be any taxpayer money involved.