Mike Fuljenz
|
Posted: Aug 29, 2017 12:01 AM
Share   Tweet
The opinions expressed by columnists are their own and do not necessarily represent the views of Townhall.com. 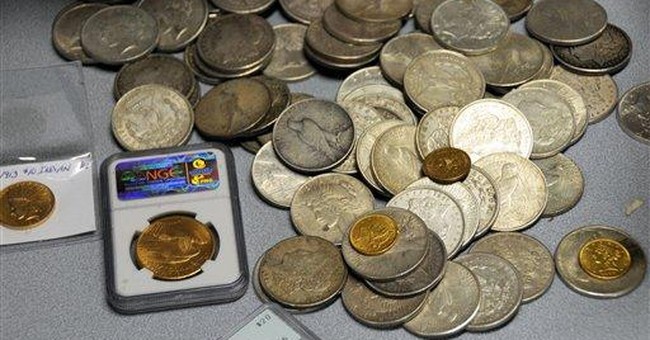 Silver is entering its “sweet spot” of the year. This September, silver has another special reason for rising – rising industrial demand.  Since 1975, silver has gained an average of 4.1% every September, making September far and away the best month for silver.(Second place is January, at +2.9%.)September is also the #1 month for gold, due to the beginning of the jewelry fabrication season for the gold gift-giving holidays in India (Diwali, followed by the wedding season), America (Christmas, followed by Valentine’s Day) and China’s New Year. Silver often follows gold’s lead – as silver often acts like “gold on steroids.”

A secondary reason for silver to rise strongly this September is that major industrial metals are making a strong recovery due to rising economic growth in China and the rest of the world. This year is the first year since 2007 in which all 45 of the leading economies followed by the Organization for Economic Cooperation and Development (OECD) are all rising in tandem.  As a result, copper is at up over 20% this year, reaching a three-year high.  Iron ore is up 35% just since the end of May.  Zinc is at a 10-year high, while aluminum and other industrial metals are at multi-year highs even though oil is down.

Silver holds a unique position as a precious metal and an industrial metal. According to the Silver Institute, industrial fabrication was responsible for over half (54%) of demand for physical silver in 2016.With industrial production rising in 2017, that demand can only grow, since silver is an essential part of some very popular products, like LCD touchscreens and other modern electric devices using silver switches or printed circuit boards.  Silver is also essential for the photovoltaic cells which make up solar panels, a popular new form of alternative energy.Demand for silver in photovoltaic cells is expected to more than double between 2016 and 2018.  Meanwhile, new silver supplies from mining operations have declined due to the low cost of silver recently.

As a precious metal, silver attracts attention from investors who cannot afford multiple ounces of gold bullion.  Since silver tends to follow gold up, but in greater percentage terms, if gold makes a move this fall, silver will also rise.  We are entering a period of crisis domestically over the debt ceiling debate, and internationally over North Korea and other hot spots.  During the crisis of 2008, gold rose 15% from mid-August to late September. During the debt ceiling debate of 2011, gold rose 28% from July to September.

If we see a similar crisis in September of 2017, it is likely that gold will rise … and silver will soar.

Gold rose above $1,300 on Monday, while stocks were flat.  Overall, August was bad for stocks but very good for gold and silver.  Over the weekend, the meeting of the world’s leading central bankers at Jackson Hole, Wyoming, did not bring forth any startling news.Perhaps the speakers were reticent to say anything controversial for fear it would be misinterpreted, so they stayed close to their prepared texts.  The one speech that helped drive gold higher was when European Central Bank (ECB) President Mario Draghi said that the ECB would continue quantitative easing (QE) and bond-buying, which pushed the euro higher and the U.S. dollar lower. A falling dollar tends to push the gold price higher in dollar terms.

Put Away Some Gold for a “Texas Rainy Day”

While we in Texas are struggling through high waters this week, I have heard from some clients and news reports, in the past, that some banks may not be “on-line” to honor their debit cards or other electronic fund exchanges.  Even though we recommend that you keep the bulk of your rare coins and precious metals in bank safety deposit boxes, it is also important in these crisis situations to maintain a small amount of gold and silver bullion at home, so that you can convert these forms of “real money” into paper money at various coin shops and bullion dealers in your area.  You never know what kind of disaster can limit the electronic transfer of funds in the future, so be sure to keep some emergency bullion coins at home. Call it your Texas Rainy Day fund.

After gold popped on President Trump’s war of words with North Korea, gold coin sales rose strongly. Gold coin purchases by collectors, investors and dealers are up dramatically. We and many other dealers across the country – both small and large – have seen an increase in coin sales. We enjoyed a rise of about 40% vs. the average of recent weeks. This is an important early sign for future sales growth, too, since higher gold prices have been the primary reason behind the beginning of past multi-year rare coin bull markets in which prices rise by 100% to 1,000% in only a few years.  Any significant rise in gold’s price builds a base of new customers who will first buy bullion coins, then rare coins – for years to come.

Gold is already up 12% this year, and it has a history of going up strongly in the first year of a new President from a new party.  Back in 1993, Bill Clinton’s first year, gold rose 19.3%.  In George W. Bush’s first year, gold rose only 2.2%, but more importantly the uncertainty after 9/11 gave birth to a major gold bull market running from 2001 to 2011.  Then, in 2009 – Barack Obama’s first year – gold rose 24.4%.  Gold tends to rise in a President’s first year in part because new Presidents tend to face huge problems before they gain the experience necessary to handle those problems wisely.  We’re seeing that happen once again with the threats coming from North Korea, Russia, China and other global hot spots.

Sharply higher gold prices have been the primary reason for past rare coin bull markets where prices rise 100% to 1000% in only a few years.  When gold rises sharply new customers contact coin dealers in droves and many new customers eventually end up buying rare coins.

This is not the time to be selling gold coins or any other precious-metals-based investment. This is the time to increase your allocation in hard assets.  The kind of chaos you’re around the world should continue for several years to come.