Mike Berry
|
Posted: Sep 20, 2019 12:01 AM
Share   Tweet
The opinions expressed by columnists are their own and do not necessarily represent the views of Townhall.com. 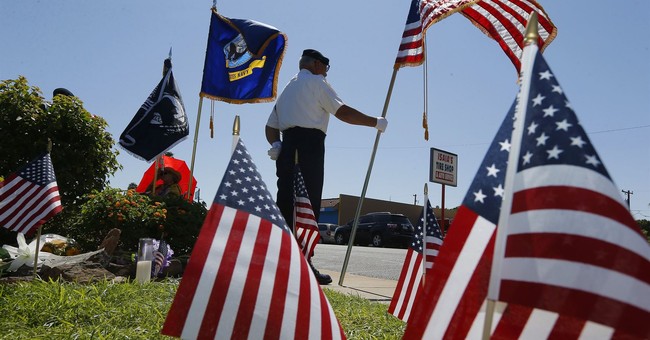 Today, September 20th, is designated as National POW/MIA Recognition Day. While it seems practically every day of the year is now designated national something day – left-handers, bring-your-pet-to-work, middle child, etc. – there remain a handful of designated days each year when Americans still pause to commemorate significant elements of our national identity. Today should be one of them.

It’s probably fair to assume that every military conflict in human history has resulted in people being captured, unaccounted for, or missing.  The term “prisoner of war” traces its roots to the 17th Century.  In the United States, efforts to honor and remember those captured or missing are most often associated with the Vietnam War. Since Vietnam, public ceremonies and private vigils by families across the nation have honored the memory of those whose sacrifice for our freedom did not end when hostilities ceased.  Indeed, the most recent estimate is that there are still 1,592 American personnel unaccounted for.

Over the decades, many organizations have taken up the noble cause of honoring and remembering our nation’s POW/MIAs.  One of the most visible manifestations of their work is the POW/MIA “Missing Man” remembrance table, nearly ubiquitous in military and VA facilities.

Each item on a remembrance table carries symbolic significance.  Historically, the Bible represents the strength gained through faith, of the POW and his or her loved ones.

The Bible that sits on the Missing Man table in the Manchester VA Medical Center lobby isn’t just any Bible.  It belonged to Herman “Herk” Streitburger, who spent time in a German POW camp during WWII before his daring escape.  Herk’s Bible symbolizes the faith and prayers that sustained him throughout his captivity.

Not everyone appreciates Herk’s service to our nation, or his Bible.  According to the activists supporting the lawsuit to remove Herk’s Bible, it “is a grotesque gang sign of fundamentalist Christian triumphalism, exceptionalism and supremacy.”

But the Constitution does not require us to purge all religious symbols—whether monuments, flags, statues, or books—simply because one or more observers claim to be offended.  Far from it, the First Amendment to the Constitution actually forbids such religious hostility.  The Supreme Court even recently said so in a case upholding the constitutionality of a cross-shaped WWI veterans memorial.

But the fact that historic displays continue to be the subject of litigation demonstrates a larger issue; one that is as much about our culture as it is our legal system. If we must censor our history to assuage the sensibilities of modern day clairvoyants who “see” offense in all corners of the public square the rest of us cannot, we lose the ability to learn from our history, all of our history—good, bad, or indifferent.

Even after wars as controversial as Vietnam, Americans have been able to come together to honor those who were willing to fight and die for our freedoms.  Few things unite us more than the sorrow we feel for the families of those whose love ones were never returned from battle or who suffered as prisoners of war.

This POW/MIA Recognition Day, let us honor men like Herk Streitberger.  There aren’t enough Herks left in the world.  His generation—the Greatest Generation—sacrificed more than most of us can fathom for the very freedoms that are now under attack.  But religious freedom was not one of them.

Mike Berry is Chief of Staff for First Liberty Institute, a legal organization dedicated to defending religious freedom for all Americans.