Mike Adams
|
Posted: Apr 22, 2016 12:01 AM
Share   Tweet
The opinions expressed by columnists are their own and do not necessarily represent the views of Townhall.com. 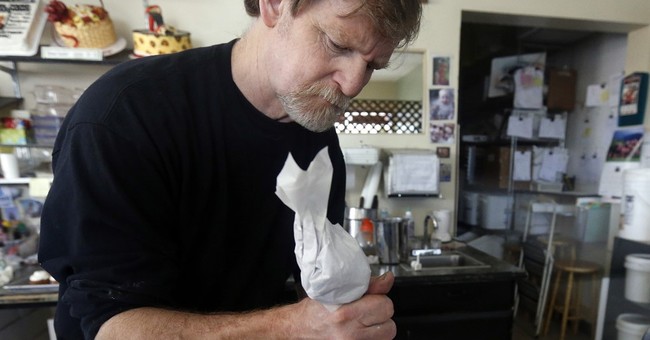 The left has always had great admiration for the conscientious objector. I know something about that because I was a kid in the late 60s and early 70s when the Vietnam War was being fought. Some people refused to serve in the war because of their deeply held religious beliefs. To those on the right they were cowards. To those on the left they were heroes. As the son of a military officer I got one side of the story. As a student in the public schools I got the other.

My teachers did their best to convince me there was legitimacy in refusing military service due to deeply held religious beliefs. They had their work cut out for them given that I grew up hearing war stories as child. One grandfather was in World War I. Another was in World War II. As a child I could not imagine why someone would refuse to serve in a war due to reasons of religion. I simply could not imagine a basis for incompatibility between patriotism and religious belief.

To top it off, there was always the prospect of fraud. For those who were simply afraid to serve there was a powerful motivation to lie about one’s religious and moral convictions. How could the state adequately distinguish between those claims that had legitimacy and those that were fraudulent?

Just a few years ago, I had a chance to exercise my rights as a conscientious objector in a very different context. A friend was getting married to a woman with whom he had an extramarital affair. Put simply, he stole a man’s wife. Then he followed the misdeed with years of unrepentant sex with her outside of marriage. Eventually, he decided to marry her. And he invited me to attend the wedding.

Just prior to the wedding, my friend joked about how his bride would be so drunk at the wedding that she would likely trip and fall on the way down the aisle. My friend thought it was funny. I didn’t think it was funny. So I declined the invitation to attend his wedding. It was an easy decision although it cost me his friendship.

As a believer, how could I have done anything differently? I sincerely believed that the wedding like the relationship itself was an utter mockery of a godly institution. Surely, no true liberal would argue that I should be forced to attend. A true liberal would respect my claim as a conscientious objector.

Thankfully, the friend who invited me to his wedding did not also ask me to play my guitar during the wedding. I played at scores of weddings when I was earning my living as a professional guitarist in the 1990s. But, make no mistake: Had he invited me to perform I would have had to refuse to provide my services based on my deeply held moral and religious view that the ceremony was not God honoring.

But would a true liberal still respect my claim as a conscientious objector under the scenario where I had refused to provide services rather than merely declined an invitation to attend? Of course he would.

The refusal to provide a paid service would not render my conscientious objector claim less credible or less principled. In fact, the opposite would be true. Moreover, I would have a vastly superior moral claim than one who refuses military service as a conscientious objector. And here is the crucial moral difference:

Surely even the most hardened leftist recognizes that I simply could not have been forced to perform at my friend’s traditional wedding. And if he supports equality he would be forced to arrive at the same conclusion had I refused to perform at a same-sex wedding on the basis of moral objections.

Of course, there is no need to alter the moral reasoning for those who serve weddings by baking cakes, arranging flowers, or taking pictures – as opposed to strumming a guitar. The same principles I’ve articulated apply equally to all. At least they should.

Unfortunately, the point that I am driving home reveals something sinister about this whole national conversation over LGBT rights. It is simply undeniable that this debate no longer has anything to do with coherent principles of fairness and equality. The new sexual revolutionaries have discarded those concepts altogether.

Furthermore, it is patently obvious that the left does not really support the idea of freedom of conscience. Their apparent support is never based upon principle. It is always contingent on whether they agree with the objections being expressed. This is the current reality of political warfare: