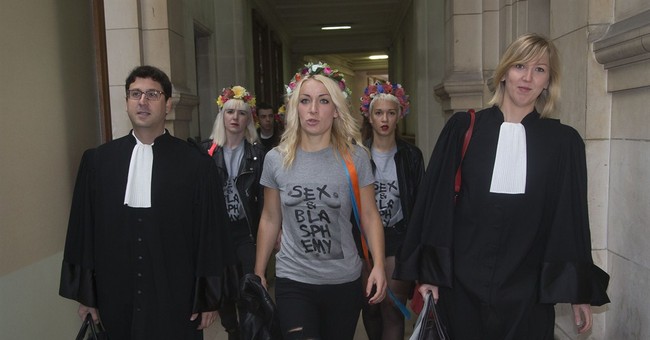 In the fall of 2011, Breanne Fahs, an Arizona State University (ASU) Women’s and Gender Studies professor, taught a course called “Psychology of Gender.” As a part of the course, Fahs asked students to break into groups and engage in what she termed "menstrual activism." More specifically, students were asked to choose some aspect of cultural attitudes toward menstruation that they wanted to "improve." Before you continue reading this column, please know that I'm not making this up and I'm not hallucinating. I stopped dropping acid in the late 1980s.

Some of you may be wondering what kinds of "cultural attitudes toward menstruation" are so serious that they require "menstrual activism" for which students can obtain college credit at an accredited university. The learned Professor Fahs supplies several examples: "the pharmaceutical labeling of ‘PMS’ and Premenstrual Dysphoric Disorder," "men’s negativity toward menstruation," "shame and silence around menstruation," and "problems with conventional menstrual products."

So Professor Fahs asked her students to design an "intervention" that could produce change in attitudes toward menstruation either on the ASU campus or in the broader Phoenix community. She later boasted publicly about some of the projects her ASU students initiated in order to fulfill the assignment. Some examples follow:

* Some of Professor Fahs' students created labels with "accurate" information about menstruation, and then put them on a variety of menstrual products, which they, in turn, distributed across the ASU campus.

*Another group of Professor Fahs' students distributed fliers that warned passersby about the dangers of using conventional tampons.

*Some students distributed information about Lunapads, Gladrags, Divacups, and other “do-it-yourself” menstrual products.

*Yet another group of Professor Fahs' students made buttons that read “Real Men Buy Tampons.” Next, they proceeded to hand them out to men on the ASU campus.

*Several students went into gas stations and created makeshift “need a tampon, take a tampon” boxes and placed them near the cash registers.

*Yet another group made signs that read, “Honk if you love menstrual sex,” and held them up around the entrances to the ASU campus.

*And, finally, a group of young women under the instruction of Professor Fahs dressed a female student in white pants, put a fake blood stain on her crotch, and filmed her as she walked through a local shopping mall.

The point of the final exercise was to show that bleeding all over yourself is no big deal. If there is a menstrual accident then (rather than simply cleaning the blood) women should walk around in public with a blood stained crotch. This is a way to reduce the stigma associated with menstruation. This is menstrual activism.

Of course, Breanne Fahs would not be a real Gender Studies professor if she weren't complaining about "harassment." Predictably, she reported that several of her menstrual activist/students faced "verbal harassment" while carrying out the project. Notable examples follow:

*The group that held signs about menstrual sex triggered a reaction from a female state representative, who called the office of the President at the university wanting know why students would engage in public obscenity. To be clear, Fahs is arguing that a) holding up signs asking people what kind of sex they like (and whether they like it during menstruation) is normal and that b) asking people why they would hold up such signs is harassment.

In 2012, about a year after Breanne Fahs initiated her effort to turn students into "menstrual activists" she took to the Internet to talk about three things she learned from her project. They are each worth noting:

2. Professor Fahs concluded that "students can make a big impact in small ways, which makes menstruation an ideal site for pedagogical discussion and activism." I simply concluded that it takes very little intelligence to become a professor of Gender Studies.

3. Professor Fahs concluded that "even the mere mention of menstruation is itself a radical act." I concluded that it really takes very little courage to be a professor of Gender Studies.

The year after initiating the menstrual activist project, Professor Fahs sent a group of three students to do a presentation at the National Women’s Studies Association conference in Oakland, California. The thesis of their presentation, according to Fahs, was that simply saying "I am menstruating today" can "radically upset discourses of silence and shame about menstruation, while also holding us accountable for how we put our bodies on the line in feminist activism."

Professor Fahs encourages her female students to "out themselves" as menstruating by simply telling people when they are menstruating. She actually tells them to do this, not just with their family and loved ones but also "in a public sense." I also agree that radical feminists need to be outed. But they need to be outed as lunatics, not as menstrual activists.

These womyn are the biggest embarrassment in the (her)-story of higher education. Period!

Cortney O'Brien
Senate Confirms Lloyd Austin to Serve as Defense Secretary
Reagan McCarthy
Hey, Democrats, You Won't Have to Dig Deep to Get to the Bottom of the National Guard's Eviction at US Capitol
Matt Vespa