My Speech to Minnesota Youth for Life 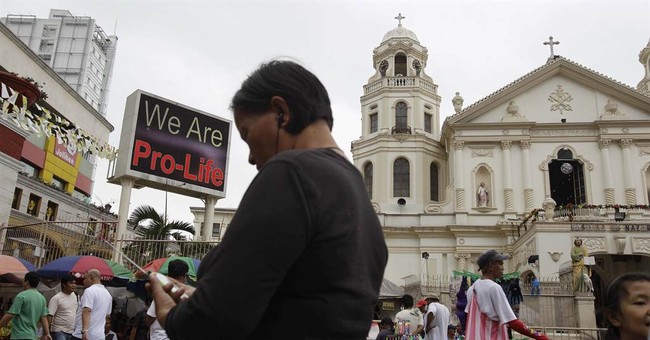 Author’s Note: This is the first installment of a three part series. The series represents a written account of my recent speech to the Minnesota Youth for Life Conference in Robbinsdale, Minnesota. Portions of the speech have been altered in order to make it sound better than it actually was. That’s how I roll.

As many of you here at Sacred Heart know, I am not Catholic. I attend a large non-denominational church in Wilmington, North Carolina called Port City Community Church. At Port City, our pastor Mike Ashcraft asks us to pick a word each year and to make it the focus of our Christian walk. Rather than making a resolution, which focuses on something negative, he asks us to pick some positive word that will serve as a lens for where we see ourselves at the end of the year. This year, my word is "activist," and I plan to make it the focus of my vision for 2014. I'm here to convince each and every one of you to consider doing the same thing. I'm also going to give you specific instructions on how to become an effective activist.

In 1993, an old family friend and pro-life activist, Lisa Chambers, sat down and talked to me about abortion. She didn't try to argue with me - even though she was passionately pro-life and I was, at the time, pro-choice. Instead, she told me about Bernard Nathanson's classic film, The Silent Scream. She just took a few minutes to describe what abortion looked like when it was shown on ultrasound. Her description of a baby trying to escape from surgical instruments while being dismembered was haunting. It caused me to focus on the single narrow question in the abortion debate, which is simple: are the unborn human?

Haunted by those images, I began to examine the question. Obviously, I decided that the unborn are indeed fully human. Otherwise, I would not be here today. My discussion with Mrs. Chambers also taught me that an effective activist does not have to win an argument outright. An effective activist merely needs to plant a stone in someone's shoe. That way, the activist can eventually win a convert without even having an argument.

Since I converted on the issue of life simply by focusing on what ultrasound technology had to say about the procedure, no one will be surprised by the first of my three recommendations to young pro-life activists.

1. Be visual. Many think it is morally impermissible to show pictures of aborted children, which might be seen as either "graphic" or "offensive." But the same thing can be said about those who show pictures of the Nazi Holocaust. Who in his right mind would conceal pictures of the Holocaust, thus making himself a Holocaust denier? So I tell young activists that they should post this link on their Facebook page at least once a week: www.caseforlife.com.

When you post something like this on your Facebook wall, all you need is a few sentences describing the video. Point out that the video shows pictures of the result of abortion after seven weeks, ten weeks, and twenty-four weeks respectively. Then, ask people to focus on the seven week abortion. That is usually the earliest that a doctor will perform the procedure. The reason is that the doctor needs the unborn to be sufficiently developed so he can account for and remove body parts that could leave a dangerous infection if not removed. Next, ask people to note that the seven week abortion had two identifiable hands and ten identifiable fingers. Finally, ask whether a pregnant woman has four hands and twenty fingers. This will destroy the "my body, my choice" argument without resorting to religion in an argument with someone who might not share your religious beliefs.

2. Draw out bad arguments. One bad argument you are likely to hear is that abortion is humane because so many of those aborted would have been born into poverty. This is definitely worthy of a rebuttal in the form of a separate status update. I always tell students to avoid getting on the thread when someone makes a really bad argument. Don't interrupt their stupidity. Let them post and repost for a couple of days and then reply with that separate status update. That way, your comments will sit at the top of your page instead of getting lost in an endless thread.

When you do respond to the "abortion prevents poverty" argument just make sure you mention Jonathan Swift. When Swift wrote "A Modest Proposal" in the 18th Century, he suggested that parents kill their children (and eat them) in order to reduce poverty. Swift was only kidding. Your pro-choice friends are serious - about the killing part, but hopefully not the eating part. And, once again, they beg the question on the central issue of the abortion debate by simply assuming that the unborn are not human.

It bears repeating that we know abortion kills a living being because doctors detect a heartbeat four weeks after conception but won't usually abort until seven weeks after conception. Since it is a human heart that is stopped in every surgical abortion we know that every surgical abortion kills a human being. That isn’t to say that life doesn’t begin until a heartbeat is detected. I’m simply asking you to think about what that heartbeat means. It means there’s a living human being actively involved in the process of developing itself from within.

Since that living human being has committed no crime, we know that abortion kills an innocent human being. They aren't criminal suspects when they are killed. They are just suspected of being chronically poor and thus sentenced to die before they place a financial burden on those who are not. We need to draw out and publicize this kind of cruel thinking. Facebook provides us with a good platform.

Similarly, people may go on to your page claiming that abortion is justified because it reduces crime. Here, some basic statistics can help highlight the cruelty and incoherence of the argument. In 1992, there were about 1.6 million abortions. There were also about 24,000 homicides (not including the abortions, of course). Since then, the homicide rate has dropped. In fact, in 2012, there were only about 14,000 homicides. The abortionists are quick to take credit by suggesting that many of those who were aborted would have been criminals, perhaps even murderers. But do you see how they are begging the question - simply assuming that the unborn are not human? Otherwise, they would not be making the crime reduction argument. They would never suggest that it is okay to kill 1.6 million human beings in a one year in order to reduce the number of homicides by ten thousand twenty years later.

Again, we must focus on the fact that 1.6 million abortions will stop 1.6 million beating hearts. The idea of simply legalizing things in order to reduce crime is dangerous. I suppose we could reduce crime by 100% if we legalized everything. But how can we ignore the question of whether the thing we made legal was also moral? How can we divorce law from morality? We can’t. All laws have a moral basis.

This crime reduction argument is easy to defeat and should be rebutted in a separate post each time it appears on one of your threads.

Finally, you might also find people pushing the "abortion prevents handicaps" argument. Be thankful when they do. It is a morally twisted argument that is likely to win you converts.

As you know, doctors are able to detect handicaps like Down's syndrome in the early second trimester - although they are not actually confirmed until later in the pregnancy. Whenever someone uses this justification I ask them whether they are suggesting that the way to cure Down's syndrome - and all other handicaps - is simply by killing every handicapped person. They usually take the bait by saying they want abortion so the fetus won't become a handicapped person. Once again, they are begging the question and walking right into a trap.

If the heartbeat is detected at four weeks and the handicap isn't detected until around fifteen weeks then your opponent has a problem. Clearly, we have evidence that the unborn are developing themselves from within - using their own hearts to do so - long before we have evidence of a handicap. We know they are human beings before we know they are handicapped. Draw this argument out of your opponent and use it against him. If you see it on a thread, use it as the subject of a separate post. The person who makes the argument might have a hardened heart toward the unborn. But you can use that callousness to turn others away from legalized abortion on demand.