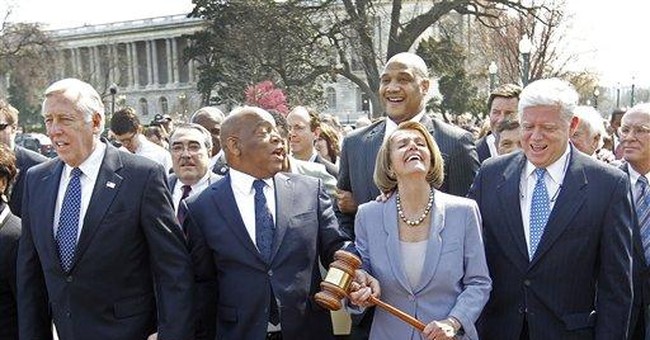 On January 22, 2004, Nancy Pelosi issued a statement regarding the fundamental right to make important health care decisions. Pelosi’s dishonest statement is reproduced (no pun intended) below. The statement is occasionally aborted (pun intended) so that my honest rebuttals can be interjected:

"Today we observe the 31st anniversary of Roe v. Wade, the Supreme Court decision that affirmed the fundamental right of women to make their own reproductive health care decisions.”

This statement alone is very good news. It would certainly seem to follow that women have a right to be exempt from a national health care plan that would force them to make purchases they do not want to make. It would have been twice as good if Pelosi had spoken of “the fundamental right of men and women to make their own reproductive health care decisions.” Nonetheless, it gets us halfway there. All women reading this column should instantly call Nancy Pelosi at (202) 225-4965. Tell Nancy Pelosi to keep her laws off your body. And tell her Mike Adams sent you.

"Even as we recognize this vital date for women, however, President Bush and anti-choice Republican lawmakers in Congress are threatening the right to reproductive freedom. Since President Bush took office, we have seen an unprecedented effort to overturn a woman’s right to choose, including passage of the first federal ban on safe and medically-accepted medical procedures.”

Of course, one of the “safe and medically-accepted medical procedures” to which Speaker Pelosi refers is known as “partial-birth abortion.” To date, it has never been deemed as “safe” or “medically-accepted” by anyone who has actually experienced the procedure. Nonetheless, most liberals see it as safer than water-boarding and other forms of enhanced interrogation.

In the six years since Nancy Pelosi’s statement, there has been a dramatic shift in Democratic support for reproductive freedom. Today, Democrats are supporting massive tax increases and unprecedented government growth that interferes with the ability and willingness of citizens to have children. If everyone is working to fund a massive government then no one has time to raise kids. Many prospective parents do not want to bring a child into a nation 13 trillion dollars in the hole.

Pelosi has inspired me, here. I’m planning to contact my favorite member of Congress, Steve King of Iowa, to propose an “Unborn Victims of Congress Act.” This would prohibit members of Congress from passing legislation that would benefit them directly and passing off the cost to future generations who would not benefit from programs that surely, to borrow the language of Roe, will not remain “viable.”

"Instead of undermining women’s rights, Congress should pass the Freedom of Choice Act, a bill introduced this week by Congressman Jerry Nadler and Senator Barbara Boxer that would protect a woman’s freedom of choice. We must also take a more comprehensive approach to reproductive health care by planning for healthy families, providing information about women’s health care options, and preventing unintended pregnancies through access to contraception. And we must continue to protect a woman’s right to choose."

If things don’t change in this country women may be forced to seek back alley doctors in order to preserve their fundamental right to make important health care decisions. And we may need to consider late term abortions for some members of Congress.