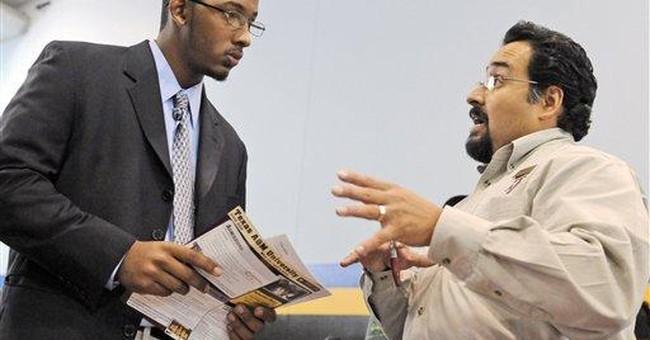 Some people call them “wiggers” but I just call them “idiots”. I used to wonder where they learned to be so racially condescending - presuming that dressing and “talking black” was a cool thing to do. But now I suspect that many of them have taken a course under Maurice Martinez, an education professor at UNC-Wilmington.

The class “Teacher, School, and Society” (EDN 200) is required of all education majors. When students take Maurice Martinez for the class they get a special treat. Maurice teaches them “Black English.” In 2003, he even copyrighted course materials to make white future teachers fluent in “Black English.”

To think I used to call ebonics the “new black death.” In retrospect, that was mighty Caucasian of me – and that isn’t a good thing. If only I had taken Professor Martinez for “Teacher, School, and Society” I would know better.

In his class, students are taught that “many African Americans speak and use a form of English that is somewhat different from Standard English.” They also learn that “the rules of Black American English are functional to those who use them.”

Professor Martinez states that “Many teachers are unaware of the rules of Black American English.” But he does not blame white teachers. In fact, he says the blame “should not be placed upon the student or the teacher, but upon ‘unawareness.’”

Maurice believes that if we wish to succeed in our “No child left behind” efforts we can begin by “trying to understand the language spoken by African American children.” Maurice cautions that “not all 36 million African Americans choose to speak Black English, especially the educated middle and upper income blacks.”

I wasn’t surprised to hear that many “educated middle and upper income blacks” refrain from the use of Black English. But, then again, I wasn’t surprised the first time I heard that “more people are in prison despite the fact that crime is down.”

Maurice devotes dozens of pages of class notes to teaching white future teachers the specifics of Black English. It isn’t rocket science but it’s darned close. For example, Maurice teaches his students that while whites use terms like “This, that, them, these, and those” blacks often say “Dis, dat, dem, dese, and dose.” His notes say “There is a ‘duh’ sound substituted for the ‘th’ sound in the beginning of the word.

Actually, the “duh” sound was the student reaction to Professor Martinez’ lecture. There are some things so obvious that even education majors can learn them on their own.

Of course, if a white teacher is going to teach black kids, she needs to learn how to curse like they do. Here, Professor Martinez is brilliant. He informs us that while whites use the terms “mother” and “brother,” blacks often prefer to say “muvah” and “bruvah.” Maurice even gives a sample sentence: “My muvah cook grits.” But he cautions that when using profanity in conjunction with the “F-word” it is best to pronounce “mother” properly.

Maurice, the tenured education professor, also informs students that when using plurals it is not necessary to add an “s” in Black English. That’s why a paper costs “50 cent,” not “50 cents.” Is this making sense? Or do we say “making cent”?

All of this is getting so confusing I’m thinking about taking a trip to the public library to confirm the existence of a thing called “Black English.” But Maurice cautions that “library” is a white way of saying things. Blacks say “liberry” – that is, those who speak Black English.

I already knew many words in Black English before I perused Professor Martinez’ class notes. For example, I knew “before” was “fo” and “fifty” was “fitty.” But I have to admit that I never knew that “corner” was “cornda.” Now I can say “Look at that ho on the cornda. I never seen that ho ‘fo.” The possibilities are endless in the world of multiculturalism and diversity!

But Black English can be used to avoid conflicts, according to Professor Martinez. Specifically, one can help avoid fights if one is aware of certain “fighting words” in Black English. For example, the white teacher should be on guard if she hears “why you trippin’?” or “shut up ‘fo I spaz on you.” Apparently, that’s even worse than when a redneck says “you ain’t no count.”

But not everything that seems like a clue to a fight really is a clue to a fight. For example, “yeah, he packin’” would seem to mean “he has a gun.” But in Black English, according to Professor Martinez’ notes, it could just mean “yes, he’s well endowed.”

When white students are done with their homework, Professor Martinez may decide to ask them “Did you do your homework?” In response, he has taught them the correct Black English answer: “Teacher, I been done did dat.”

I recommend that parents, black or white, call UNC-Wilmington and say “I want my chump back, ‘cause Professor Martinez is whack!” Or, to make it less personal, they could say “I want my scrilla, ‘fo rilla!”