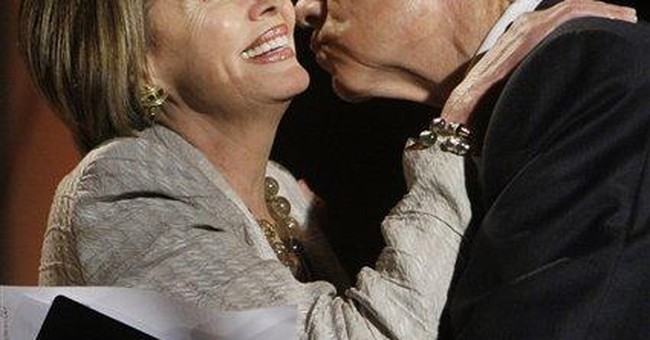 I used to wonder what it would be like to work for Nancy Pelosi. Imagine having to answer to a left-wing feminist who alternately encourages uncivil discourse (to war protestors) and civil discourse (to town hall protestors) depending on political expediency. But I do know something about working for Nancy Pelosi. I work for her ideological twin sister, Rosemary DePaolo.

In January of 2008, there was a movement by some members of the faculty senate to fire DePaolo for, among other things, her authoritarian style of leadership. DePaolo undoubtedly got wind of the potential coup. She could not possibly have been unaware of the fact that she was losing control over the faculty. So she did what many radical feminists do under the circumstances: She hired a man to come save her.

After Provost Brian Chapman was hired to come to the aid of our East Coast Nancy Pelosi it took only a matter of weeks for him to wear out his welcome. Somewhere between slamming his cell phone on desks during arguments and shaking his finger at faculty members while scolding them he quickly earned a reputation as a hot-head.

Chapman later tried to mend his damaged reputation by attending various department meetings in a stated effort to correct “misperceptions” about his style of governance. During one of those faculty meetings a tenured professor asked Chapman whether he was hired to come in here and “kick a**” for DePaolo. He answered in the affirmative.

In other words, our East Coast Nancy Pelosi needed someone to yell at the faculty and keep them in line. But she didn’t want to be the one who was tagged as being “uncivil.” She gave the job to a stronger man.

The faculty responded with an uprising and fired Chapman. Chancellor DePaolo (hereafter: DePelosi) responded by pushing for greater “respect” and “civility” on campus. She even had the following “Seahawk Respect Compact” framed and posted in every classroom on campus:

“In the pursuit of excellence, UNC Wilmington actively fosters, encourages and promotes inclusiveness, mutual respect, acceptance and open-mindedness among students, faculty, staff and the broader community.

Therefore, we expect members of the campus community to honor these principles as fundamental to our ongoing efforts to increase access to and inclusion in a community that nurtures learning and growth for all."

~ We affirm the dignity of all persons. ~ ~ We promote the right of every person to participate in the free exchange of thoughts and opinions within a climate of civility and mutual respect. ~
~ We strive for openness and mutual understanding to learn from differences in people, ideas and opinions. ~
~ We foster an environment of respect for each individual, even where differences exist by eliminating prejudice and discrimination through education and interaction with others. ~

In other words, DePelosi did everything short of hiring Elton John to come sing “Can you feel the love tonight” before the entire faculty senate.

It is important for every conservative to read that compact (and to forward this column) because it reveals fundamental truths about how the liberal operates in response to a potential loss of political power – or even the prospect of losing a simple argument. Some of those truths are worth highlighting:

The phrase “you’re being uncivil” always means that the liberal is experiencing anger at his, her, or its inability counter an intelligent political move or political argument. When the liberal begins to hate the speaker, he, she, or it refers to the argument as “hate speech.”

The phrase “you’re being uncivil” is most frequently employed by the least polite and least socially skilled (e.g. Nancy Pelosi) party in a given conflict.

And, finally, (it should go without saying) never apologize in response to an accusation of incivility at the hands of a liberal.

Recently, a student came by to complain that he had gone to one of DePelosi’s “open forums” designed to allow students to ask questions of the Speaker, I mean, Chancellor. He wanted to ask a question but was not allowed to. Instead, students were asked to write down their questions on a sheet of paper. An assistant to the chancellor then filtered all the questions and read the easier ones to the Chancellor, thereby avoiding any direct exchanges with the students (read: constituents).

I really don’t respect Chancellor DePelosi because she has not earned it by showing she can debate with people a third of her age. Nor do I respect Speaker Pelosi since she is unwilling to allow transparency during the legislative process.

Respect cannot be legislated any more than it can be framed and nailed on a wall. Respect must be earned. Then, and only then, can we talk about civility.