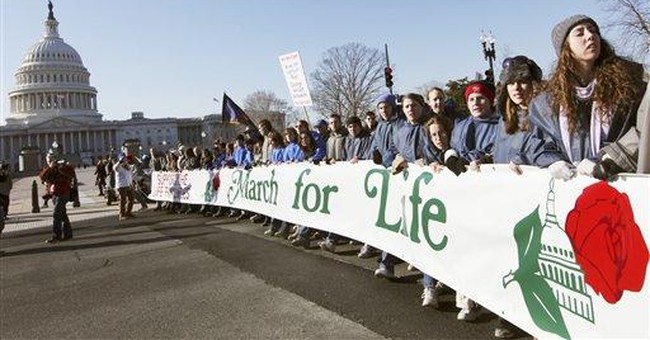 For several years, I’ve been using the term “cultural Marxism” to explain the motives of those who would like to see the government take over the marketplace of ideas, especially on our college campuses. A good example of cultural Marxism can be found by examining a recent controversy at Spokane Falls Community College (SFCC). The controversy has now turned into a lawsuit after students were threatened with expulsion for holding a pro-life event on campus.

It is difficult to imagine how administrators at SFCC could see the pro-life event as at odds with the school’s emphasis on diversity. After all, a flier for the event condemned racism citing the fact that “One out of every two African American pregnancies ends in abortion.” The flier condemned sexism, too, by citing the fact that “Female feticide, along with female infanticide, has caused the death of an estimated 60 million girls in Asia alone.”

The flier even promoted equality by referencing the Declaration of Independence. But the diversity police were still offended. The way they are constantly getting offended, one would think the SFCC administration is full of hate. But they insist they are anti-hate, which is why they provide students with an educational diagram called “The Pyramid of Hate.”

The Pyramid of Hate, provides a number of important definitions to students who wish to join the administration in their fight against hate. For example, “acts of bias” include “jokes,” “seeking out like-minded people,” “screening out positive information,” and using “non-inclusive language.” Warning: If you didn’t see anything positive about that definition of “acts of bias” you just committed one.

And it’s a very bad thing to commit an act of bias because that may result in the filing of a report for a “bias incident,” which is defined as follows: “An act of conduct, speech or expression to which a bias motive (relating to race, religion, disability status, ethnicity/national origin, gender or sexual orientation) is evident as a contributing factor regardless of whether the act is criminal.”

Beth Sheeran, president of the censored pro-life club, has turned to the Alliance Defense Fund for help. Her First Amendment legal complaint contains shocking allegations. For example, the administrator in charge of dispersing student funds, Heather McKenzie, is alleged to have said that the state of Washington cannot fund “non-pro choice” speech events because it is a “pro-choice” state.

So I guess Defendant McKenzie thinks pro-life events are illegal everywhere in America because we are a “pro-choice” country.

But McKenzie had all kinds of reasons to seek to censor the pro-life event. She said it was “hateful,” “biased,” and “one-sided.” She also suggested it could be construed as racist because it cited statistics about the disproportionate number of abortions in the African-American community.

I like the way this is playing out so far. McKenzie accuses Sheeran of racism after Sheeran has raised an issue of racism. So Sheeran mimics the tactic: She sues McKenzie for her intolerance after McKenzie raises an issue of intolerance.

I guess we can learn something from the proponents of cultural Marxism. Maybe they call them useful idiots for a reason.