No Gay Mormon Left Behind 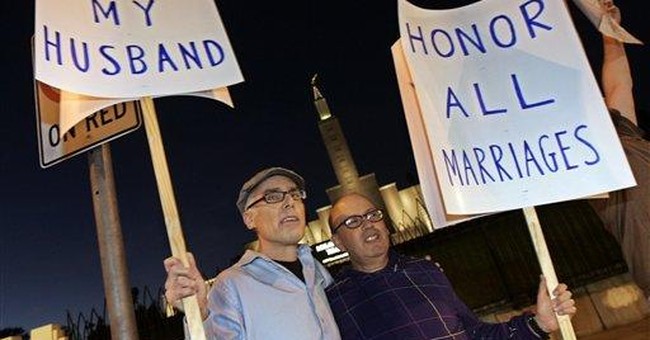 The other night I saw another debate on the topic of gay marriage. The debate was between Robert Jeffress, an opponent, and Wayne Besen, an extremely gay activist. It was the kind of lame debate I’ve come to expect lately on the Fox News show The O’Reilly Factor. In fact, nothing interesting happened until the last few seconds of the six-minute segment when Besen characterized the debate’s first legitimate point as “crazy.”

Jeffress argued the point many opponents argue when he said that gay marriage could lead to polygamy and even to marriage between a man and his pet. When Besen reacted strongly with the interjection “that’s crazy” he was saying more than that polygamy and man-beast marriage will never happen. His strong emotional reaction indicated a belief that those two things should never happen.

Besen’s strong reaction showed that he and Jeffress agree on more than they realize. The point is best illustrated by listing the four forms of marriage mentioned on the Factor segment, which was hosted by Juan Williams:

1. A union between one man and one woman.

Jeffress and Besen actually agree on the proper legal status of three of these arrangements; namely, that #1 should remain legal while #3 and #4 should remain illegal. They only disagree on the legal status of arrangement #2. In other words, Besen is just trying to get Jeffress to accept one-half, rather than merely one-forth, of the above arrangements. Of course, we all know why Besen wants him to do this. It is because to do so would be an expression of “tolerance.”

While the casual observer may comprehend quickly the reason gay activists like Besen want to expand the definition of marriage, there is no real indication why they would not want to expand it further. And there is little understanding of why Besen would react so strongly to an even more inclusive definition of marriage. If one can be morally superior to another by being more tolerant why not be really morally superior by being really tolerant?

The problem with the segment was really that its moderator Juan Williams seemed overly sympathetic with Besen to the point where he could not ask rather obvious questions. Had he done his job, Williams could have gotten a decent explanation for Besen’s opposition to #4; namely, that no union between man and animal could be legitimate because the latter cannot offer voluntary consent. That’s simple enough.

But things get more complicated when the advocate of gay marriage tries to explain his moral superiority in relation to the polygamist. And this is good because it helps us pause and focus the debate on the current rift between members of the gay community and members of the Church of Jesus Christ of Latter Day Saints, or Mormons.

The real difference between the typical Mormon and the typical gay activist was on display when Besen challenged the notion that Pastor Rick Warren loves gay people. In disagreeing, Besen said that Warren only wanted to “pray away the gay.” And he said this in a tone dripping with sarcasm.

Anyone who rightly calls himself Christian recognizes that he has all manner of anti-social impulses – to attack others, to lie, or to steal – and he welcomes those who would offer prayers to attenuate these impulses. But the gay activist isn’t so welcoming. He just gets offended.

Today you never hear the phrase “assaulting American”, “lying American”, or “stealing American.” But the term “gay American” is commonplace. That is because most gays have no interest in curbing their impulses. They not only act upon them but allow their expression to become the principal basis of their identity.

When the Mormons were told in the 19th Century that they had no right to polygamy, they decided to modify their religious practices and curtail their sexual behavior. That is why today they are among our most valuable citizens. But gays in the 21th Century have responded to similar dictates by storming into churches and impeding the religious rights of their peaceful neighbors.

I don’t really care where gays get the impulses underlying their sexual identity. But I do ponder the origins of their smug moral condescension.