Fred Phelps Goes Down Under 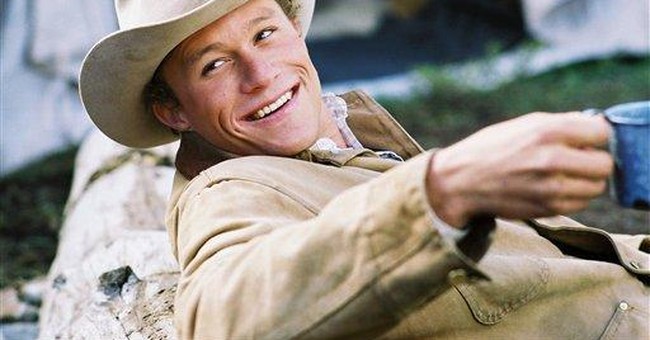 Fred Phelps, the pastor and head lunatic of Westboro Baptist Church (WBC) of Topeka, Kansas (call 785-273-0325 or visit godhatesfags.com) has written an open letter to the family of Heath Ledger. In the short letter is a demand that the Ledger family divulge the time, date, and place of the late actor’s burial in Perth, Australia, so WBC can go - in respectful proximity - and conduct a “religious service.”

Fred Phelps has already caused untold suffering and pain to the families of dead American soldiers by protesting their funerals with signs proclaiming that “God Hates America” because “Gad Hates Fags” and America tolerates them. He even proclaims on his website that Americans should celebrate Improvised Explosive Devices as a gift from a God who is punishing the soldiers by blowing them up – again, for America’s crime of tolerating homosexuality.

Phelps says that Heath Ledger would want the Westboro clan (or perhaps, Klan) to appear at his funeral for three reasons:

1. As a warning to the living that they should repent, "lest they also come into this place of torment. The church claims that Heath is pleading right now for somebody on earth to preach the truth to his family, unless they, too, “join him in Hell.”

2 If Heath could come back to life to speak to his loved ones on earth, he would “lift up his voice in a hideous scream,” in order to say "Listen to Phelps! For God's sake, Listen to Phelps.”

3. Finally, that the Ledger family owes it to the youth of a world that Heath misled in his movie "Broke Back Mountain" – specifically by misleading them into believing it was permissible, morally speaking, to be gay.

The open letter closes by saying, “All those whom Heath misled will arrive ultimately in Hell, and they will curse Heath to his face throughout all eternity. Please tell us the time, date, and place of Heath's funeral in Australia. Thank you.”

I’m going to surprise many people by joining in the request that Fred Phelps and his congregation be given information that would lead him to the funeral and burial place of Heath Ledger. Providing this information to these lunatics would, in my constitutionally protected opinion, have three principal benefits:

1. Relaxing Gun Control in Australia. Recent restrictions on gun ownership in Australia have had deleterious effects on public safety. In fact, the rise in crime accompanying the rise in gun control in Australia provides just the kind of natural experiment needed to refute the claims of anti-gun propagandists like Michael Moore. But after Fred and his violently bigoted gang of terrorists show up down under – and there are no guns handy to re-establish the peace – Australians will be demanding the return of full rights to gun owners. And, clearly, the left and right will be united against this unspeakable coward.

2. Getting Fred Phelps out of America. It should go without saying that the second advantage to getting the WBC congregation to Australia is that it will get them out of America. Once gone, we can then deny Phelps and company re-entry as a punishment for their treasonous acts as Americans. There is little use denying that WBC is a terrorist organization, which has provided comfort and aid to America’s enemies in a time of war – both with their speech and with their actions. Keeping them out of the country may seem harsh but it is not nearly as harsh as the penalty they truly deserve for committing treason: death.

3. Getting Fred Phelps ready for the prospect of hell. It would be a good idea to let Fred go down under before he really goes down under. In January, it is quite hot in Australia. It’s not as hot as hell but it should allow him to acclimate before making his final destination.

Of course, it isn’t me who says Fred Phelps is going to hell; it’s actually Fred Phelps.

Of course, this is all bad news for the obviously gay Phelps who says that gays are going to hell. Maybe he forgot to read Matthew 7:3 about “the log that is in (his) own eye.” And maybe that log is big enough to build a log cabin for two. Or start a campfire on his personal Broke Back Mountain in hell.