Pyongyang on the Prairie, Part I

Michelle Malkin
|
Posted: Dec 06, 2017 12:01 AM
Share   Tweet
The opinions expressed by columnists are their own and do not necessarily represent the views of Townhall.com. 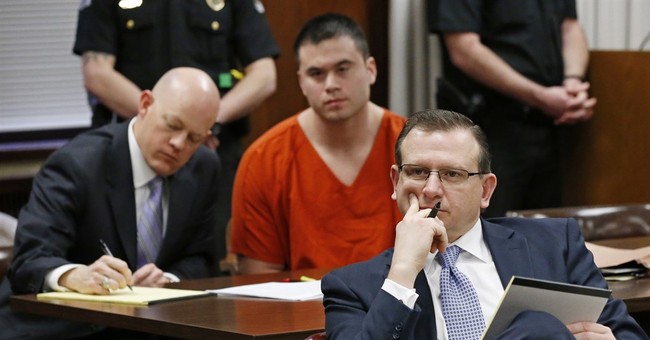 A criminal justice system that operates in the dark is arbitrary, unjust and criminal.

In Oklahoma this year, a Kafkaesque set of sealed motions, secret orders and closed-door hearings completely shut out a criminal defendant, his public defenders and the public. A trial judge served as handmaiden for the prosecutors, even failing to notify the defendant and his lawyers of the kangaroo court proceedings until after they had occurred.

The defendant, who is appealing his convictions and maintains his complete and actual innocence, was denied an opportunity to challenge the state's legal arguments for hiding information about a crime lab analyst's shoddy work on his case that could be exculpatory and key to his exoneration. His public defenders were also denied the opportunity to cross-examine witnesses -- all government employees from Oklahoma City and the Oklahoma City Police Department.

Welcome to Pyongyang on the Prairie.

The Oklahoma attorney general's office claims that the trial judge, Timothy Henderson, conducted an "exhaustive" review of the protected materials and "deeply explored" their contents with government witnesses who only represented the government's side of the story.

Here's the thing: While the defendant was denied representation at the secret hearings, Oklahoma County Assistant District Attorney Gayland Gieger was allowed to enter the star chamber with an entire "team" of fellow prosecutors. (We only know this after two local TV journalists obtained video footage from a surveillance camera outside the hearing room.) In fact, the state attorney general divulged in one of the few unsealed court filings on the matter, Gieger "facilitated the District Court's inquiry by thoroughly examining those witnesses in an ex parte proceeding."

Gieger was the original prosecutor in the defendant's case. The defendant's appeal argues that Gieger "repeatedly and flagrantly misrepresented" evidence at trial, including the forensic evidence and testimony of the OCPD crime lab analyst, Elaine Taylor. A report by six internationally renowned DNA scientists and experts released this summer highlighted Taylor's "flawed forensic science, including insufficient serological analysis and improper DNA testimony" in the case at hand. The scientists concluded that the defendant, former Oklahoma City police officer Daniel Holtzclaw, who is now serving 263 years for a bandwagon pile-on of sexual assault allegations, "was deprived of his due process right to a fair trial because the State misused DNA evidence" and stated that his "conviction should be overturned and he should be given a new trial."

Taylor's work on the case, the state was forced to acknowledge, just happened to be the subject of the secret hearings that Assistant District Attorney Gayland Gieger was allowed to "facilitate."

Can you spell "conflict of interest"?

Incredibly, the state attorney general pats itself on the back for "its strong commitment to transparency" and argues that the "State was forbidden by law from turning any of the material over to the defendant" because a crime lab review of Taylor's work is "an unfinished personnel review" protected by the state open records act. Nonsense on a stick. The law specifically states that a public body "may," not must, keep personnel records confidential -- and there is no indication that a review of Taylor's work would invade her privacy.

Both the public's right to know and the defendant's constitutional rights to exculpatory information (as well as information subject to cross-examination) trump the phony "personnel records" shield erected by the state attorney general's office and its collaborators.

In fact, given the wave of crime lab scandals across the country from Austin, Texas, to Washington, D.C., it is in the national interest to disclose such information about questionable forensic analysis and testimony (which I've exposed more at length in my CRTV.com work on the Holtzclaw case and other wrongful convictions for "Michelle Malkin Investigates").

It's even more imperative given the Oklahoma City Police Department's sordid history of fabricated forensic evidence and misconduct dating back more than 15 years.

Fact: Taylor reportedly told a former supervisor that she destroyed rape kits under Gilchrist's orders because she "believed the only thing (she) could do was to follow (Gilchrist's) orders or else pay the consequences."

Fact: Elaine Taylor is the mother-in-law of Detective Rocky Gregory, the co-lead investigator in the current defendant's case (a relationship that was not disclosed at trial).

Fact: My attempt through a public records request to obtain a list of cases from the DA's office in which Taylor served as an expert witness -- so that the public can learn if she botched other analyses and testimonies -- was flippantly rejected because "our office maintains no list of cases in which Ms. Taylor appeared as a witness to give testimony as an expert or otherwise," and so "this matter (is) now closed."

Nearly six months after the cloak-and-dagger confab on Taylor's work held in late June in Judge Henderson's locked courtroom, the Oklahoma Court of Criminal Appeals has yet to respond to Holtzclaw's motion to unseal the secret proceedings. In fact, the criminal appeals court has yet to issue a ruling on his public defenders' simple motion for an order to preserve evidence in light of the police department's admission that it had deleted Taylor's email account after she retired on Feb. 2, 2017 (a fact not known to the defendant until media public records request forced disclosure).

Legal experts left, right and center tell me they've never seen anything like this. Former ACLU of Oklahoma president and retired University of Oklahoma law professor Randall Coyne blasted the secrecy circus this summer, and his words bear repeating:

"This is no way to run a criminal justice system. In 29 years of practicing and teaching criminal law in Oklahoma, I have never seen the level of sealed orders and secret, ex parte courtroom proceedings that has occurred in the Holtzclaw matter. ... The dark cloud of secrecy over the Holtzclaw case gives rise to suspicions that somebody is hiding something. ... The court immediately should unseal all orders and filings so the public -- as well as other convicted defendants whose cases and lives may be impacted -- can see the details."

Is this North America or North Korea? Over to you, Oklahoma Court of Criminal Appeals.