Michelle Malkin
|
Posted: Aug 17, 2016 12:01 AM
Share   Tweet
The opinions expressed by columnists are their own and do not necessarily represent the views of Townhall.com. 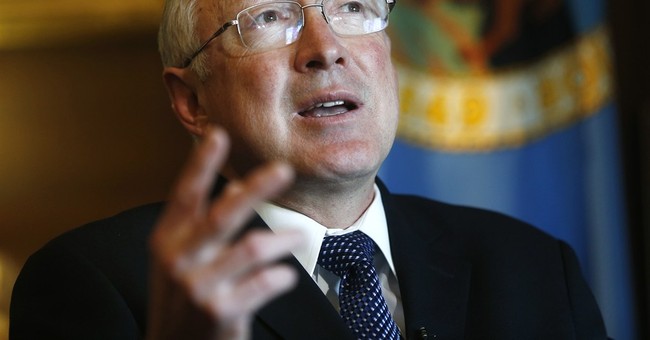 The pick confirms that a Clinton presidency would not only be Barack Obama's third term ideologically, but also culturally. As in the Democratic culture of corruption.

Ken Salazar is a thug. Before stepping down as Obama's interior secretary in 2013 "to spend time with family," Salazar threatened violence against a local Colorado Springs Gazette reporter who had the audacity to challenge one of the ten-gallon hat-wearing bureaucrat's cronyism-tainted deals.

At issue: How rancher and reported Salazar business associate Tom Davis profited handsomely from the Bureau of Land Management's Wild Horse and Burro Program. Not long after Salazar took office, Davis paid $10 each for more than 1,700 federally protected horses who roamed on public lands. He then turned around and sold them for slaughter near the Mexican border for $154,000, despite signing a contract prohibiting him from doing so.

When Gazette reporter David Phillips (now at The New York Times) asked about the controversy at an Obama election night event in November 2012, Salazar snapped:

Caught on tape by Philipps and another witness, Knuckles Salazar issued an "apology." But neither he nor Davis, who said he had previously hauled cattle for Salazar for years, ever answered for their actions. An Inspector General determined Salazar's department "failed to follow its own policy of limiting horse sales and ensuring that the horses sold went to good homes and were not slaughtered." No penalties, no prosecution, no nothing.

Ken Salazar is a liar. He trampled the rule of law, defied court orders, and doctored scientific conclusions in the name of environmental protection. Have you forgotten? After the BP oil spill in 2010, the Obama White House imposed a radical six-month moratorium on America's entire deepwater drilling industry. The sweeping ban -- inserted into a technical safety document in the middle of the night by Obama's green extremists -- cost an estimated 19,000 jobs and $1.1 billion in lost wages.

The order was supposedly based on recommendations from an expert oil spill panel. But that panel's own members (along with the federal judiciary) called out Obama's environmental team for misleading the public about the scientific evidence and "contributing to the perception that the government's findings were more exact than they actually were." Salazar and eco czar Carol Browner oversaw the false rewriting of the drilling ban report to completely misrepresent the Obama-appointed panel's own overwhelming scientific objections to the job-killing edict.

Federal judge Martin Feldman in Louisiana blasted the Interior Department for defying his May 2010 order to lift its fraudulent ban on offshore oil and gas drilling in the Gulf. Feldman singled out the Salazar-run agency's culture of contempt and serial "determined disregard" for the law.

"Much to the government's discomfort and this Court's uneasiness," Feldman wrote, Salazar's doctored report was "misleading" and the experts who wrote it called it a "'misrepresentation.' It was factually incorrect." Once again, Salazar evaded accountability despite continued obstruction and repeated refusal to cooperate with nearly 50 public records requests from Congress regarding his post-BP spill decisions.

Ken Salazar hates American consumers and workers. He infamously told the Senate in 2008 that he would refuse emergency drilling requests in the Arctic National Wildlife Refuge even if gas prices reached $10 a gallon. He arbitrarily pulled nearly 100 oil leases in Utah -- costing the state thousands of jobs -- based on bogus eco-claims that were refuted by the Interior Department's own inspector general. Offshore and onshore, Salazar waged war relentlessly on the energy sector and the American West.

In other words: a perfect headhunter for America's Evita Peron.