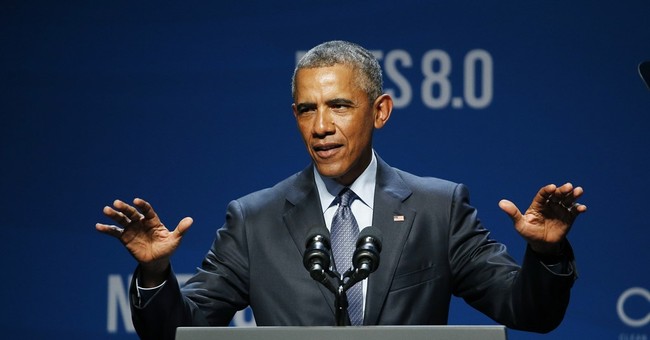 Trending
The most transparent administration in American history is at it again -- dodging sunlight and evading public disclosure.

CEI argues that federal transparency law "applies to the work-related records of agency employees regardless of where they are stored. Many agencies routinely instruct their staff to preserve any such documents that they might have on their personal email accounts." Yet, as head of the White House Office of Science and Technology Policy, Holdren has placed himself above the law and spirit of transparency that Obama fraudulently vowed to uphold.

"It makes little sense to claim that an agency is not 'withholding' documents when it refuses to produce documents held by its own chief executive that relate to 'agency business,'" CEI's legal brief rightly argues. "Even if OSTP had demonstrated that these emails were not within its actual control -- which it did not -- its failure to search its director's personal account would still violate FOIA because any agency records in that account fall within the agency's 'constructive control.'"

To this day, Holdren has escaped questions about his freaky-deaky population-control agenda. Remember, this is the unrepentant sky-is-falling guru who joined fellow whack jobs Paul and Anne Ehrlich in co-authoring "Ecoscience," a creepy tome that called for saving the planet by proposing that:

--Women could be forced to abort their pregnancies, whether they wanted to or not.

--The population at large could be sterilized by infertility drugs intentionally put into the nation's drinking water or food.

--Single mothers and teen mothers should have their babies seized from them against their will and given away to other couples to raise.

--People who "contribute to social deterioration" (i.e. undesirables) "can be required by law to exercise reproductive responsibility" -- in other words, be compelled to have abortions or be sterilized.

--A transnational "Planetary Regime" should assume control of the global economy and also dictate the most intimate details of Americans' lives -- using an armed international police force.

The White House Office of Science and Technology Policy obstinately refused to answer my questions for Holdren on his views about forced abortions and mass sterilizations or on his continued embrace of forced-abortion advocate and eugenics guru Harrison Brown, whom he credits with inspiring him to become a scientist. Holdren's mentor likened the global population to a "pulsating mass of maggots."

These are not harmless dalliances of the past. Holdren's insidious ideology -- and his hidden policy communications -- now have an untold impact on American taxpayers. He is the top strategist in Obama's war on carbon, war on coal, war on the West and war on the economy. Holdren is the zealot "right at the heart" (as The New York Times put it) of devising White House climate change initiatives that reward environmental cronies, send electricity rates skyrocketing and kill jobs.

Who is Holdren conducting government business with, and what is he hiding from the public? What data is being doctored, what scientific evidence is being stonewalled in the name of rescuing the planet and consolidating power in the hands of the green elite? It's time to turn up the heat.