The Green-Card Racket for Beltway Cronies 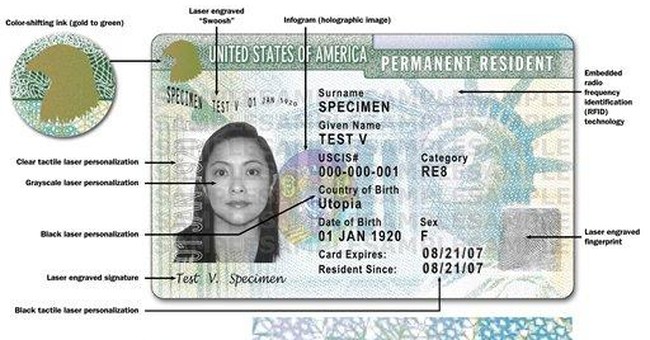 Can we stop putting America up for sale to the most politically connected bidders yet? Where is our self-respect?

Created under an obscure section of the expansionist 1990 Immigration Act, EB-5 promised bountiful economic development for the U.S. in exchange for granting permanent residency (and eventual American citizenship) to foreign investors. A few years later, Congress conjured up the idea of EB-5 "regional centers" -- government-sanctioned business groups and corporate entities acting as middlemen to administer the immigrant investments and facilitate the visa peddling.

Beltway cronyism was embedded in EB-5's DNA from the get-go. The original Democratic House sponsor and his spokesman went on to establish for-profit companies that marketed the program and provided consulting services. Former federal immigration officials from the George H.W. Bush administration formed lucrative limited partnerships to cash in on their access and EB-5 expertise. An entire side industry of economic book-cookers arose to supply analyses of the "job creation" benefits of EB-5 projects and to gerrymander Census employment data to fit the program's definition of "targeted employment areas" in order to qualify for lower investment thresholds (as was done in New York City's Atlantic Yards/Pacific Park EB-5 deal).

Since the program's inception, rank-and-file adjudicators have tried to enforce the investment standards. But senior managers leaned on them to reverse EB-5 rejections when wealthy donors, law firm pals and political hacks complained.

Behind the scenes, the IG found, Dirty Harry Reid pressured Deputy DHS Secretary Mayorkas to overturn his agency's rejection of expedited EB-5 visa applications for Chinese investors in a Las Vegas casino hotel, which just happened to be represented by Reid's lawyer son Rory. Adjudicators balked at the preferential treatment. Mayorkas steamrolled the dissenters, who reported on shouting matches over the cases. Reid's staffers received special briefings from Mayorkas to update them on the project's progress.

One underling called it "a whole new phase of yuck."

Meanwhile, in the words of one DHS official at the Immigration and Customs Enforcement bureau, Mayorkas "absolutely gave special treatment" to electric car racket GreenTech, which zealously sought EB-5 visas for another group of deep-pocketed Chinese investors. McAuliffe helmed the company after it was spun off from a Chinese venture. He plugged in Rodham as president of Gulf Coast Funds Management, which won designation as an EB-5 regional center certified to invest foreign capital in federally approved commercial ventures in Louisiana and Mississippi, including GreenTech. Louisiana GOP Gov. Bobby Jindal and former Mississippi GOP Gov. Haley Barbour both signed letters urging DHS to approve Gulf Coast as a regional center.

After adjudicators dismissed the company's job claims as "ridiculous," "flawed" and "not approvable," McAuliffe personally leaned on then-DHS Secretary Janet Napolitano, "complaining about the denial of the Gulf Coast amendment and requesting her assistance to get the amendment approved and to expedite more than 200 investor petitions."

In violation of recordkeeping and disclosure rules, Mayorkas met with McAuliffe in February 2011 after USCIS denied GreenTech's requests. Mayorkas mysteriously took no notes and could not recall just exactly how many phone calls he took from McAuliffe and what exactly they discussed (though he did remember the "caustic" Democrat yelling "expletives at high volume." Mayorkas met personally with senior staff to urge the agency to reverse its denials and give McAuliffe and company what they wanted and even offered to write the reversals himself.

On a third front, Mayorkas intervened on behalf of EB-5 petitioners seeking green cards by investing in Hollywood studios such as Sony Pictures and Time Warner. He had received pressure from the L.A. mayor's office, where an aide helpfully mentioned she knew a mutual acquaintance of his from his old law firm, O'Melveny and Myers, and from Rendell, a paid consultant to the EB-5 regional center representing the foreign investors. Mayorkas reversed his staff's rejections of more than 200 suspect EB-5 applications and set up a special "deference review board" to bow to Hollywood.

Two decades ago, when the program's failures were first exposed, Rep. John W. Bryant, a Texas Democrat, protested on the House floor: "This provision is an unbelievable departure from our tradition of cherishing our most precious birthright as Americans."

How much more evidence do you need that this foreign investor pay-for-play swindle makes an irremediable mockery of the American Dream? The only effective way to "reform" this abomination is to kill it.