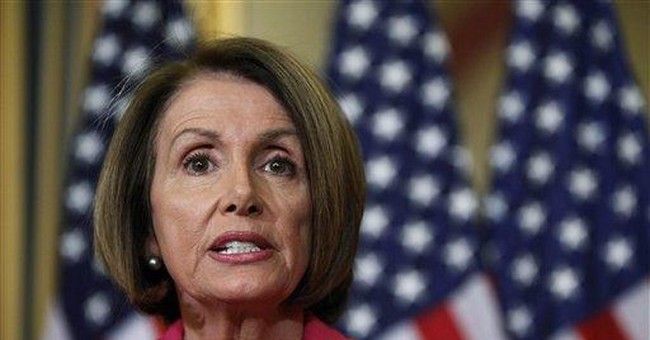 On Thursday afternoon, by a vote of 402-1, the House overwhelmingly passed a privileged resolution offered by the Republican leadership demanding a formal House Ethics Committee investigation of Pelosi and her (mis)handling of harassment allegations concerning disgraced former New York Rep. Eric Massa. The soft-on-corruption ethics panel (see under "Rangel, Charlie") had decided to shut down its investigation after Massa abruptly resigned on Monday.

But with reports piling up on how Massa kept a Capitol Hill playhouse filled with young, low-paid male staffers, and how Pelosi's office had fielded complaints of his bizarre and inappropriate behavior back in October, the House decided to pry the lid back open and put a stop to what the resolution calls the "public ridicule" the seeming cover-up has invited.

Housecleaner Pelosi cannot be pleased by the second-guessing of her handiwork. Color her an un-merry maid. Even Democratic Rep. Patrick Kennedy, fresh from his raving House floor meltdown over media coverage of the Massa mess, voted for the GOP-initiated House resolution. Finally: Bipartisanship we can believe in!

With the exception of lone Democratic Rep. Chaka Fattah who voted "no" and 27 members (including those who sit on the House Ethics Committee) who voted "present" or "not voting," every other member of Pelosi's House supported the petition to direct the Committee on Standards of Official Conduct to investigate fully "which House Democratic leaders and members of their respective staffs had knowledge prior to March 3, 2010 of the aforementioned allegations concerning Mr. Massa, and what actions each leader and staffer having any such knowledge took after learning of the allegations."

The resolution stipulates that "numerous confusing and conflicting media reports that House Democratic leaders knew about, and may have failed to handle appropriately, allegations that Rep. Massa was sexually harassing his own employees have raised serious and legitimate questions about what Speaker Pelosi as well as other Democratic leaders and their respective staffs were told, and what those individuals did with the information in their possession."

Democratic Rep. Barney Frank, who earned a House Ethics Committee slap on the wrist in 1990 after using his congressional office to fix parking tickets for male prostitute Steven Gobie, was one of those leaders in the know. After voting for the resolution, he disclosed for the first time that Massa had invited one of his young staffers to dinner. "Although this was not an ethical violation," Frank said in a published statement, one of his senior staffers was informed of the dinner and alerted Massa's Chief of Staff Joe Racalto.

In other words: Frank's office knew it smelled illicit. And Frank would know.

Racalto went on to contact Pelosi's office directly in October. Tick, tick, tick. Five months later, in the wake of Massa's own self-professed proclivity for tickle parties and victim/witness accounts of Massa's alleged sexual assaults on his Navy underlings, Pelosi is pooh-poohing the scandal: "I have a job to do and not to be the receiver of rumors." Translation: Don't bother me with concerns about my members' indiscretions. I'm busy. How quickly we've accelerated from the "most ethical" House ever to "see no evil, hear no evil, speak no evil."

There was a time when Pelosi the protector held House leaders to the highest standards and expectations in guarding young people working on Capitol Hill. During the GOP Mark Foley scandal, she inveighed: "The children who work as Pages in the Congress are Members' special trust. Statements by the Republican Leadership indicate that they violated this trust when they were made aware of the Internet stalking of an underage Page by Mr. Foley and covered it up for six months to a year."

Yet, she remains silent on the plight of the 20-somethings with whom Massa was keeping house under circumstances that rate an Ick Factor of 10-plus. Massa's alleged targets are someone's children, too.

Deflecting accountability for her own office's violations of trust, Pelosi feigned sympathy for Massa and attributed his impaired ethical judgment to his medical condition (he has cancer). "Poor baby," she said through gritted teeth. He's "a very sick person." So, what's Pelosi's excuse?