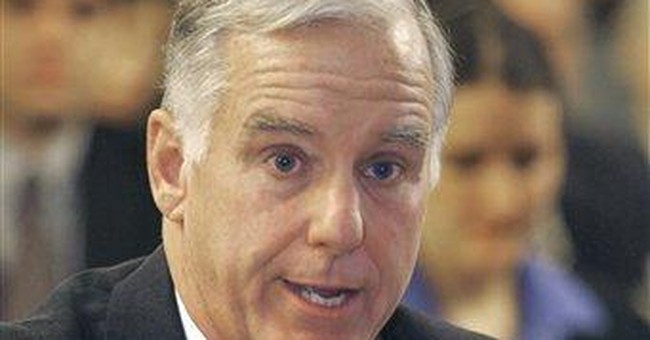 Seems like only yesterday the Washington establishment had proclaimed the death of the GOP. Pundits churned out public autopsy reports faster than the L.A. County Medical Examiner. Liberals gloated over the supposedly irreparable fissures between right-wing populists and Beltway Republican elites. Conservatism, we were told, was suffering brain death and heart failure. My, how quickly things -- ahem -- change.

It's the left, not the right, cracking up. It's the party donkey, not the elephant, now in a rabies-crazed frenzy. Funny, though, how internecine rancor on the right always puts conservatism in its last, final, permanent death throes (again and again), but internecine warfare on the left is merely a matter of healthy, principled disagreement.

"Progressive" documentarian Michael Moore one-upped Hamsher's attack by threatening to boycott the entire state of Connecticut until it started a recall of Lieberman: "People of Connecticut: What have u done 2 this country? We hold u responsible. Start recall of Lieberman 2day or we'll boycott your state," Moore wrote on his Twitter account. Recalls, alas, are unconstitutional in Connecticut. Not that "progressives" would ever let any state or federal constitution get in the way of a bloody ideological vendetta.

Obama's BFF and most frequent visitor, SEIU president Andy Stern, threw the president's own words back at him in a cri de couer to Big Labor's brothers and sisters: "President Obama must remember his own words from the campaign. His call of 'Yes We Can' was not just to us, not just to the millions of people who voted for him, but to himself."

And moving toward the middle, moderate Democratic Sen. Ben Nelson is having his own Joe Wilson moment. On Thursday, he announced he couldn't support his colleagues' abortion language "compromise," which he said failed to restrict government funding for abortion services.

Meanwhile, House Democrats are blaming Senate Democrats and the White House for the legislative meltdown. The Nobel Peace Prize winner-in-chief himself has come under fire. Democratic Rep. David Obey of Wisconsin carped that "the Obama administration is sitting on the sidelines." Democratic Rep. John Conyers of Michigan accused the White House of selling out to the insurance industry.

It all feels very 1990s -- the period between 1992 and 1994, specifically -- when liberals smugly declared the premature death of the GOP only to be walloped by the midterm conservative backlash. The ruling majority got greedy, overreached and lost touch with average Americans. With the support of the public, Republicans united to slay Bill Clinton's stimulus monstrosity and Hillary Clinton's health care monstrosity. And the core differences between the parties could not have been clearer.

Then, as now, GOP strategists flirted with hapless "rebranding" programs in the wake of failed presidential campaigns. They bought into the public autopsy reports of their friends in New York City media green rooms and Georgetown parlors.

Then, as now, it took a grassroots conservative groundswell to remind the Beltway bubble boys and girls that adhering to the core principles of fiscal conservatism -- lower taxes, less government, more freedom -- was the key to party unification and would open the door once again to power.

And then, as now, conservative talk radio helped galvanize the revolt against a Democrat-spearheaded attempt at a government health care takeover. Local Seattle talk-show host Kirby Wilbur's huge protest against Hillary Clinton's visit in July 1994 was the turning point. National media outlets could not ignore the public booing of the first lady in the liberal Emerald City and the legislative doom it portended.

One major difference now is the vast proliferation of alternative media -- through Facebook, Twitter, blogs and Fox News -- that has facilitated the spread of information about Democrats' big-government designs and given rise to Tea Party activism. The right's ability to change the narrative is greater than ever. The Democratic crack-up reminds us that there are no faits accomplis in politics. Political coroners, take heed.