Who Are You Calling "Extremist"? 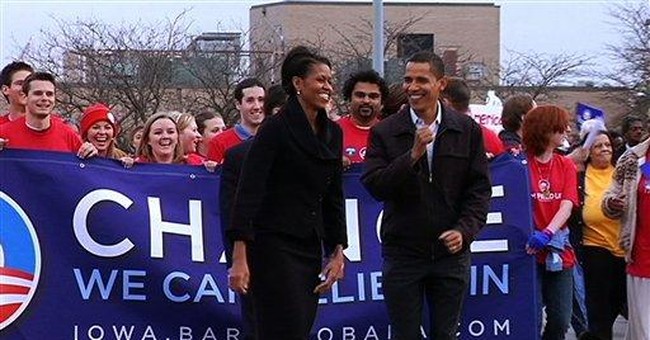 Here is one of the loudest messages of the 2009 off-off-year elections: Conservatives in America will no longer let their opponents define them as outside of the mainstream. They will not submit to Democrats. Or to the media. Or to Beltway Republican capitulationists. They will not "rebrand." They will not sit down. They will not shut up.

Just this past weekend, Democratic Rep. Jim Moran attacked the Republican candidates for governor and attorney general in his state of Virginia as the "Taliban ticket."

And senior White House adviser Valerie Jarrett told ABC's "This Week" that the grassroots conservative-vs.-GOP leadership battle over NY-23 showed that the Republican Party leadership was "becoming more and more extreme, and more and more marginalized."

Jarrett is the White House official who bragged openly about recruiting disgraced Marxist rabble-rouser Van Jones for the green jobs czar post. She lavished praise on his public career and said she had followed him "for as long as he's been active out in Oakland." In Oakland, Jones was working to dismantle California's juvenile justice system, pitting minorities against police officers and crusading to free death row cop-killer Mumia abu Jamal.

Who are you calling "extreme"?

Jarrett's White House colleague Patrick Gaspard, Obama's political director who intervened in the race to convince Scozzafava to endorse the Democratic candidate Bill Owens after she dropped out, was a top organizer at the militant Local 1199 chapter of the Service Employees International Union and an activist/organizer for the New Party and the Working Families Party -- both ACORN/Democratic Socialists of America front groups.

Who are you calling "extreme"?

As I pointed out in my Oct. 16 column, there was never anything moderate about Scozzafava. There was no fiscal conservatism to balance her social radicalism. It wasn't merely that she was "pro-choice." She was also a proud recipient of a pro-abortion award named after eugenicist Margaret Sanger.

It wasn't merely that she favored higher government spending. It was also that she supported the stimulus, which every single House Republican in office opposed, on top of her support for the union-expanding card-check bill, on top of her ambiguous statements on the energy tax-imposing cap-and-trade bill.

Newt Gingrich, who foolishly stood with Scozzafava until she threw herself under the bus over the weekend, piously invoked Reagan and condemned the extreme "purism" of unruly conservatives who wouldn't keep quiet about Scozzafava's radical-left agenda.

But conservatives are not demanding "purity." They are simply abiding by Reagan's own wise counsel in 1975: "A political party cannot be all things to all people. It must represent certain fundamental beliefs which must not be compromised to political expediency, or simply to swell its numbers."

The Republican National Committee and National Republican Congressional Committee threw upward of $900,000 down the toilet for a candidate whose core views and political alliances undermined conservatism's fundamental beliefs in limited government from Day One. It was a reckless expenditure of the GOP base's hard-earned money and a bitter tuition bill for a teachable moment on the perils of political expediency.

The days when immoderate political operatives and feckless Beltway opportunists could define "moderation" by their own warped yardsticks without pushback are over.