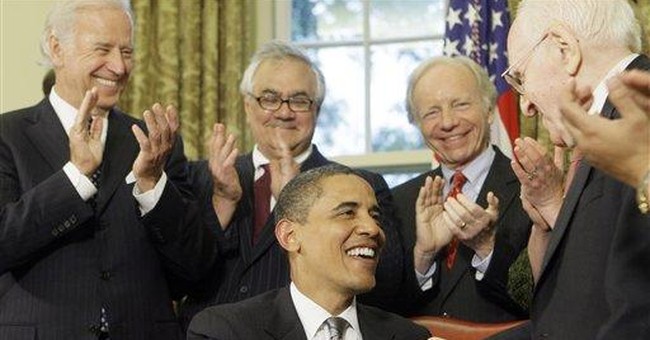 The White House, Democrats and MoveOn liberals are spreading health care sob stories to sell a government takeover. But there's one health care policy nightmare you won't hear the Obamas hyping. It's a tale of poor minority patient-dumping in Chicago -- with first lady Michelle Obama's fingerprints all over it.

Both Republican Sen. Charles Grassley of Iowa and Democratic Rep. Bobby Rush of Illinois have raised red flags about the outsourcing program run by the University of Chicago Medical Center. The hospital has nonprofit status and receives lucrative tax breaks in exchange for providing charity care.

Yet, in fiscal year 2007, when Mrs. Obama was employed there, it spent a measly $10 million on charity care for the poor -- 1.3 percent of its total hospital expenses, according to an analysis performed for The Washington Post by the nonpartisan Center for Tax and Budget Accountability. The figure is below the 2.1 percent average for nonprofit hospitals in surrounding Cook County.

Rep. Rush called for a House investigation last week in response to months of patient-dumping complaints, noting: "Congress has a duty to expend its power to mitigate and prevent this despicable practice from continuing in centers that receive federal funds."

Don't expect the president to support a probe. While a top executive at the hospital, Mrs. Obama helped engineer the plan to offload low-income patients with non-urgent health needs. Under the Orwellian banner of an "Urban Health Initiative," Mrs. Obama sold the scheme to outsource low-income care to other facilities as a way to "dramatically improve health care for thousands of South Side residents."

In truth, it was old-fashioned cost-cutting and favor-trading repackaged as minority aid. Clearing out the poor freed up room for insured (i.e., more lucrative) patients. If a Republican had proposed the very same program and recruited black civic leaders to front it, Michelle Obama and her grievance-mongering friends would be screaming "RAAAAAAAAACISM!" at the top of their lungs.

Joe Stephens of The Washington Post wrote, "To ensure community support, Michelle Obama and others in late 2006 recommended that the hospital hire the firm of David Axelrod, who a few months later became the chief strategist for Barack Obama's presidential campaign. Axelrod's firm (ASK Public Strategies) recommended an aggressive promotional effort modeled on a political campaign -- appoint a campaign manager, conduct focus groups, target messages to specific constituencies, then recruit religious leaders and other third-party 'validators.' They, in turn, would write and submit opinion pieces to Chicago publications."

Axelrod's great contribution: re-branding! His firm recommended renaming the initiative after "internal and external respondents expressed the opinion that the word 'urban' is code for 'black' or 'black and poor.' … Based on the research, consideration should be given to re-branding the initiative." Axelrod and the Obama campaign refused to disclose how much his firm received for its genius re-branding services.

In February 2009, outrage in the Obamas' community exploded upon learning that a young boy covered by Medicaid had been turned away from the University of Chicago Medical Center. Dontae Adams' mother, Angela, had sought emergency treatment for him after a pit bull tore off his upper lip. Mrs. Obama's hospital gave the boy a tetanus shot, antibiotics and Tylenol, and shoved him out the door. The mother and son took an hour-long bus ride to another hospital for surgery.

I'll guarantee you this: You'll never see the Adams family featured at an Obama policy summit or seated next to the first lady at a joint session of Congress to illustrate the failures of the health care system.

Following the Adams incident, the American College of Emergency Physicians (ACEP) blasted Mrs. Obama and Axelrod's grand plan. The group released a statement expressing "grave concerns that the University of Chicago's policy toward emergency patients is dangerously close to 'patient dumping,' a practice made illegal by the Emergency Medical Treatment and Active Labor Act (EMTALA)" -- signed by President Reagan, by the way -- "and reflected an effort to 'cherry pick' wealthy patients over poor."

Rewarding political cronies at the expense of the poor while posing as guardians of the downtrodden? Welcome to Obamacare.