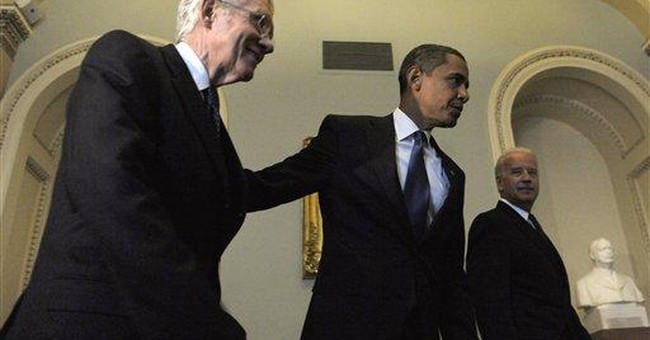 Left-wing groups in Washington, D.C., are panicked. The New York Times and other Team Obama whitewashers are downplaying the connection between the Obama presidential campaign, the Association of Community Organizations for Reform Now (ACORN) and Obama's old employer Project Vote (ACORN's nonprofit canvassing arm). Alas, the truth keeps seeping out.

At a closed-door powwow hosted Thursday at the left-leaning Center for American Progress, activists discussed how to combat a relentless stream of corruption charges from ACORN/Project Vote whistleblowers. But it's too late for a reputation bailout. Former Project Vote official and whistleblower Anita MonCrief has harnessed the Internet to crowd-source a massive cache of documents showing ties between Obama staff members and the supposedly "nonpartisan" ACORN operations.

Last fall, The New York Times abandoned an investigation into whether Obama had shared donor lists with Project Vote, a 501(c)(3) organization that is prohibited from engaging in political activity. Public editor Clark Hoyt earlier this month called it "the tip that didn't pan out." Critics suggested the donor lists could have been compiled through public records. But I have obtained the lists -- not only of Obama donors, but also lists of Democratic National Committee, Hillary Clinton and John Kerry contributors. The records include small donors to the Obama campaign, who are not disclosed in public campaign finance databases. It's information only a campaign could supply.

MonCrief testified under oath last fall that her then-boss, Karyn Gillette, gave her the Obama donor list and told her the campaign had furnished it. Moreover, e-mail messages between ACORN, Project Vote and other affiliates, including ACORN subsidiary Citizens Services, Inc. (CSI), make explicit references to working on "Obama campaign related projects." The "list of maxed out Obama donors" is specifically mentioned in staff e-mail. Another message from ACORN/Project Vote official Nathan Henderson-James warns ACORN and affiliated staff to prepare for "conservatives … gearing up a major oppo research project on Obama."

Henderson-James wrote, "Understand I'm not suggesting that we gear up to defend a candidate's campaign." But that, of course, is exactly what the ACORN enterprise did.

Why does this matter? Transparency, tax dollars and electoral integrity. ACORN's own lawyer Elizabeth Kingsley acknowledged last year that a vast web of tax-exempt ACORN affiliates were shuffling money around -- making it almost impossible to track whether campaign rules and tax regulations were being followed. ACORN receives 40 percent of its revenues from taxpayers. Americans deserve to know whether and how much commingling of public money with political projects has occurred over the last four decades -- and what role the Obama campaign played in this enterprise.

Remember: Last August, the Obama team admitted its failure to properly disclose $800,000 in payments to CSI -- which works hand in hand with Project Vote and the ACORN parent organization. Obama mysteriously reclassified the campaign advance work expenditures as "get-out-the-vote" activities. Nary a peep from electoral integrity watchdogs.

Despite heated denials from Team Obama, the links between ACORN, Project Vote and CSI are inextricable. As Obama himself reminded ACORN leaders after its political action committee endorsed his presidential candidacy in February 2008:

"I come out of a grassroots organizing background. That's what I did for three and half years before I went to law school. That's the reason I moved to Chicago was to organize. So this is something that I know personally, the work you do, the importance of it. I've been fighting alongside ACORN on issues you care about my entire career. Even before I was an elected official, when I ran Project Vote voter registration drive in Illinois, ACORN was smack dab in the middle of it, and we appreciate your work."

As I've reported before, the Obama campaign's "Vote for Change" registration drive, run simultaneously with ACORN/Project Vote, was an all-out scramble to scrape up every last unregistered voter sympathetic to Obama's big-government vision.

In an e-mail message to whistleblower MonCrief last summer, New York Times reporter Stephanie Strom told the truth: "The real story to all this is how these myriad entities allow them to shuffle money around so much that no one really knows what's getting spent on what." By Oct. 6, 2008, Strom had thrown in the towel in the wake of blistering phone conversations with the Obama campaign. She wrote:

"I'm calling a halt to my efforts. I just had two unpleasant calls with the Obama campaign, wherein the spokesman was screaming and yelling and cursing me, calling me a right-wing nut and a conspiracy theorist and everything else. … I'd still like to get that file from you when you have a chance to send it. One of these days, the truth is going to come out."

It's only just begun.