No Mercy for Jihad Johnny 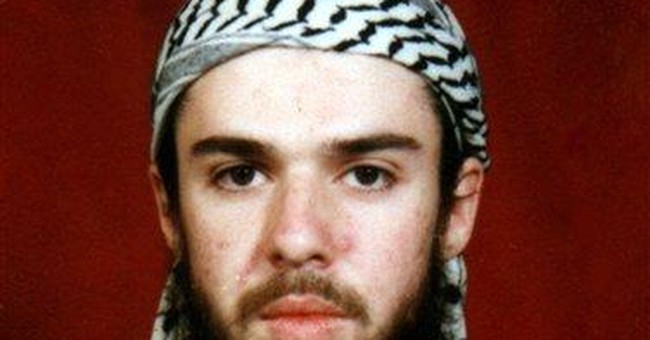 If it's December, it's time for the left to throw another shameless pity party for convicted American jihadist John Walker Lindh (aka Suleyman al-Faris, aka Abdul Hamid). Every Christmas season for the past four years, the Taliban accomplice and his parents have asked President Bush to pardon him. This country should save its tears and mercy for the defenders of freedom.

The farther we move from the September 11 attacks, the cloudier our collective memory of Lindh's case becomes. Sympathetic journalists have rewritten the history, embracing him as a naive young hippie-dippie from Marin County, Calif., who was just caught in the "wrong place at the wrong time."

Others, like Esquire magazine writer Tom Junod, have proclaimed him "innocent" and lamented his life behind bars in a federal medium-security facility. Junod criticized the government for forbidding Lindh to speak Arabic -- human rights atrocity! Meanwhile, he enjoys the privilege of cooking meals for himself and fellow inmates, working in the library, and praying to Mecca. Junod insisted that Lindh deserves more "credit for his sense of purpose or his vast reserves of will" and more "credit for what it took to get to Afghanistan, much less what it took for him to get back to America."

In Afghanistan, I remind you, Jihad Johnny took up arms with the terrorists. His purpose was to kill Americans, and his "reserves of will" accomplished the goal. He told the feds he trained with al-Qaida before the September 11 attacks and fought alongside them after Osama bin Laden's henchmen murdered 3,000 of Lindh's fellow citizens on American soil. He wrote a letter to his mother expressing support for the U.S.S. Cole bombing that took 17 sailors' lives, and despite an emphatic denial by Lindh's father that Jihad Johnny took up arms against his country, he recounted how his rifle malfunctioned on the front lines in Takar.

Finally, on Nov. 25, 2001, upon being captured and taken to the Qala-i Jangi fortress outside Mazar-e Sharif for interrogation, Suleyman al-Faris/Abdul Hamid/John Walker Lindh sat silent -- and deliberately and defiantly chose not to tell American CIA officer and former Marine Corps artillery specialist Mike Spann about a planned Taliban prison revolt. Spann was killed in the riot.

Asked by journalist Robert Pelton at the prison if this was "the right cause or the right place," Lindh replied unequivocally: "It is exactly what I thought it would be."

Who deserves the credit for "sense of purpose" and "reserve of will"? The saboteur of American freedom or the guardian?

Mike Spann's family visited the fortress after his murder. They talked to Afghan doctors who will never forget his bravery. "They said they thought Mike might run and retreat, but he held his position and fought using his AK rifle until out of ammo, and then drew and began firing his pistol," Spann's father said. "While watching Mike fight they were able to jump up and run to safety.

"They said the only reason that they and several others were able to live was because Mike stood his position and fought off the prisoners while enabling them the time to run to safety. The doctors stated that as they fled toward a safe haven they saw Mike run out of ammo and then witnessed him fighting hand to hand until he was overcome by the numerous al-Qaida and Taliban prisoners."

American hero Mike Spann will not get to cook dinner for his widow, Shannon, and their three young children. Mike Spann cannot curl up with a good book or go to church with his family. Pray for Mike Spann, show his family the compassion and gratitude they deserve -- and may American traitor John Walker Lindh rot in hell.