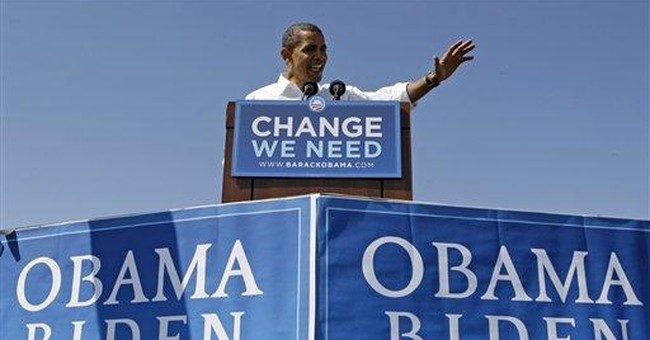 Warning: If your neighbor's got an "Obama '08" bumper sticker or lawn sign, you might want to double-check your door locks at night. The One has commanded his Purveyors of Change to go forth and proselytize to the unbelievers. And they're not going to be knocking gently like Avon Ladies.

Barack Obama, you see, is done fixing souls. It's time to crack heads. Prodded by panicked Democrats to take off his white gloves, he issued a Call to Strong Arm to his legions of angry followers on Wednesday. Hope is out. Hellfire is in. Now, the same analysts who tut-tutted Sarah Palin's mild use of sarcasm at the GOP convention are heralding -- in the words of the Obama water-carriers at the Associated Press -- Obama's "feistier, more sarcastic tone" and his push for Democrat activists "to sharpen their elbows, too."

Team Obama is so committed to this "face-to-face" shock troop campaign that it is now busing activists from state to state ("Drive for Change!") to target undecided voters -- and offering subsidies to volunteers. In advance of Obama's rally in Nevada, California field director Mary Jane Stevenson organized a pilgrimage to boost the crowd numbers with housing incentives:

"Face-to-face contact with undecided voters is the single most effective way to grow this movement. No experience is required, and we'll help you make the trip as easily as possible with either housing in Nevada or discounted group rates at an area hotel."

Yep, a bunch of angry Obama cultists and left-wing ACORN drifters are coming to your neighborhoods to accuse you of racism, call you unpatriotic for not bowing down and forking over more taxes to keep the Mother Ship afloat, and check your tire pressure and thermostats while they're at it. Feel the power of positive change.

The in-your-face directive comes as Team Obama Chicago-fies its tactics by:

-- Stepping up sleazy ads. Tthe latest one twisted the words of radio talk giant Rush Limbaugh in a laughable attempt to paint John McCain as an immigration hardliner and stir fear among Hispanic voters;

-- Doubling down on the race card. Kansas Gov. Kathleen Sebelius shamelessly baited supporters with this line: "Have any of you noticed that Barack Obama is part African-American? (Republicans) are not going to go lightly into the darkness;"

-- And suppressing dissent. Rebuffed by the Justice Department in their efforts to prosecute conservatives for running ads critical of Obama's ties to Weather Underground terrorist Bill Ayers, the campaign is using an army of supporters to mob radio and television stations daring to air investigations of the relationship. The foot soldiers receive their marching orders through "Obama Action Wires" and bombard critics with disruptive phone calls.

Meanwhile, the Left's Sarah Palin hatred has been encouraged by the in-your-face comments of Michelle Obama, who derided the Alaska governor's intellect ("What you learn about Barack from his choice is that he's not afraid of smart people") and looks (don't cast a vote because "she's cute") on the campaign trail. And Team Obama's goons on the Internet -- led by Gawker Media and the Huffington Post -- are reveling in the hacking of Palin's private e-mail account, the publication of private, family photos of her children stolen from her account, and the abuse of daughter Bristol's cell phone number stolen from the account. For countless friends of Obama, "in your face" is code for "anything goes."

In words and actions that would have made his mentor Saul Alinsky proud, Barack Obama is rubbing raw the sores of discontent -- and summoning his unhinged flock to do the same. All hail the community-agitator-in-chief. And remember: Lock your doors.