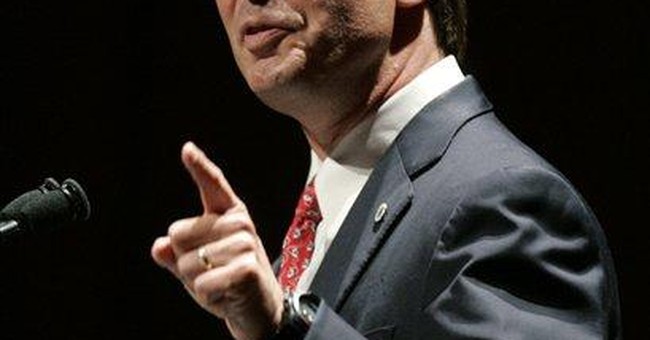 RALEIGH – On hearing of the resolve of North Carolina troops during a Civil War battle, tradition holds that General Robert E. Lee had this praise for the Almighty: “Thank God for the Tar Heel boys.” He might have something less flattering to say about the Tar Heel State’s new favorite sons, John Edwards and Mike Easley.

Edwards, a one-term senator from North Carolina and vice presidential running mate for John Kerry in 2004, has been a feature of national headlines since admitting last summer to an extra-marital affair. The story is not unique — the phrase “adulterous politician” has become something of a tautology — but alleged financial malfeasance associated with the tryst has added to Edwards’ entropy.

So, too, has the fact that Edwards broke his marriage vows while his wife, Elizabeth, was suffering from breast cancer. In 2007, Edwards decided to continue his ultimately unsuccessful bid for the Democratic presidential nomination despite his wife’s illness. Elizabeth says in a new memoir that news of her husband’s affair made her cry, scream, and vomit.

Now, federal attorneys are probing whether Edwards skirted the law by diverting campaign funds to pay his mistress. Edwards denies any wrongdoing, but his public support has eroded to the point that he couldn’t be elected dogcatcher, let alone to statewide or federal office. A poll in mid-May found that a Bush-esque 69 percent of North Carolinians have an unfavorable opinion of him.

Edwards is not alone in his Blagojevich-type behavior. Although the story hasn’t gained the national spotlight yet, the misdeeds of a second North Carolina politician have caught the attention of federal investigators in recent weeks. Mike Easley, a former prosecutor and attorney general, left office in January after serving eight years as governor. Two months later, the capital city’s newspaper, the News & Observer of Raleigh, began an exposé on the former governor’s many conflicts of interest while in office.

Documents show that Easley received cushy automobile arrangements from a businessman while serving as governor, in addition to a sweet real estate deal in which Easley bought a coastal lot for half of what it appraised for a year later, a situation the Feds are now looking into.

Easley’s wife, Mary, also benefited from a hefty pay raise at N.C. State University, where her salary jumped from $90,300 to $170,000 last year. In a potential quid pro quo, the university provost and chairman of the personnel committee, both friends of the Easleys, played a role in hiring Mary in 2005 and subsequently approving her pay raise. Today, the chancellor of the university asked her to resign.

The developments are the latest in a string of public corruption cases to plague North Carolina. In 2007, then State House Speaker Jim Black pled guilty to federal corruption charges stemming from a series of clandestine pay-offs in public restrooms. Black accepted tens of thousands in bribery money to push legislation favorable to his chiropractic contacts. He is serving a five-year prison sentence.

Black was one of many. Other recently public corruption cases in the Tar Heel State include former Congressman Frank Ballance, former state Rep. Thomas Wright, and former Agriculture Commissioner Meg Scott Phipps, all of whom got jail time for their crimes.

Ironically, when the Black scandal was heating up, Easley signed new ethics guidelines into law and had nothing but good to say about transparency in government. “North Carolina citizens have the right to know that the power they entrust to public officials is not abused for private gain or personal interest,” Easley said.

That was then, this is now. As documented by the N&O, Easley has been tight-lipped about his cars, real estate, traveling habits, wife’s salary, and friendships.

North Carolina should be known for its basketball champions, barbeque, and rich natural diversity. Instead, it’s becoming known as the Chicago of the South.