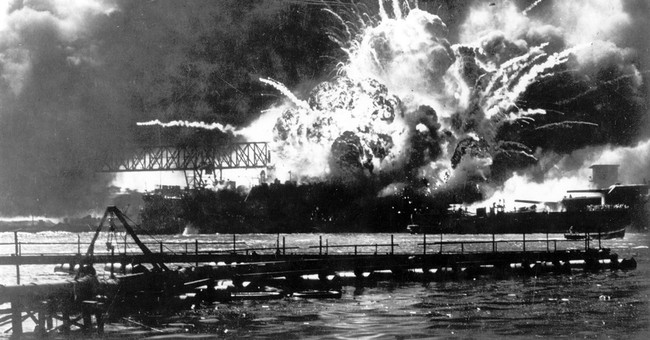 And so the war began... America didn’t know it yet, but we were well on our way to entering World War II. On this day, in 1941, the Japanese First Air Fleet (an aircraft carrier strike) began its journey toward Pearl Harbor. Adm. Chuichi Nagumo’s orders were simple: If the United States and Japan reached a compromise in their ongoing negotiations, the fleet would return to Japan without conducting any offensive action. (Spoiler alert: We didn’t reach a negotiation with the Japanese. Go watch Tora! Tora! Tora!)

I know it seems unbelievable, but even in 1941 America was run by politicians who were more concerned with their re-election than the security of the nation. (Should I mention that Democrats were in charge?) A war-weary country had decided to “stay out” of the new world-wide turmoil… And then we imposed some economic sanctions on Japan for not behaving in our interests. Strangely, the Japanese didn’t really like this.

Franklin D. Roosevelt and Secretary of State Cordell Hull both expected some sort of Japanese attack in retaliation for their diplomatic harassment, but I guess they didn’t think it would be that big of a deal. (Don’t get me wrong… Japan needed to be sanctioned. But it would have been nice if FDR had just been a little more open with the American people about where this was going to lead.) Before you know it, the Americans got wind of a Japanese offensive, sanctions were strengthened, and Prime Minister Tojo decided to abandon diplomacy for a slightly more… “explosive” tactic. (Did you read that last bit with a Snidely Whiplash voice? Because that’s how I wrote it.)

The man chosen to lead the Imperial Air and Naval Forces of Japan into battle was a man who had no naval aviation experience. Nagumo, much like the American Democrat Party, was chosen primarily because he had been around for long enough to earn a little name recognition. The Naval Chief of Staff, Rear Adm. Isoruku Yamamoto, managed to convince the fleet that the best way to cripple the Americans into submission was to deal an unmatchable first blow to our naval powers.

FDR and Hull must have known that an attack was imminent. Heck, half of America was on edge waiting for the great World War II to suck America into a fight. And yet, the geniuses in DC couldn’t figure out what target the Japanese would choose. I guess a tiny island in the middle of the Pacific (where half our Pacific fleet rested with relaxed security measures) didn’t really “pop” in conversation at the Pentagon.

FDR’s War Department had even made it clear to other members of government that if war was truly inevitable, it would “prefer that Japan commit the first overt act.”

Sure, hindsight is a distinct advantage. But with an entire world embroiled in war, and a hostile Japanese Empire aligning itself with the enemies of American interest, you would think a little preemptive military action might have been considered. Heck, you would think an attempt to discourage an attack on our primary Pacific Naval base would have been a priority once it became obvious that sanctions were working about as well as FDR’s “New Deal”. (That means they weren’t working, by the way.)

But in the end, Americans managed to pull together and defend our freedom. Fighting on two fronts, we managed to achieve victory (despite Washington DC micromanagement, bureaucratic impediments, and political tinkering with military decisions). As it turns out, a little political incompetence (ahem*Roosevelt*ahem) was no match for the organic spirit of the American experiment.