Chicagoland: Where Tigers Are More Common than Guns 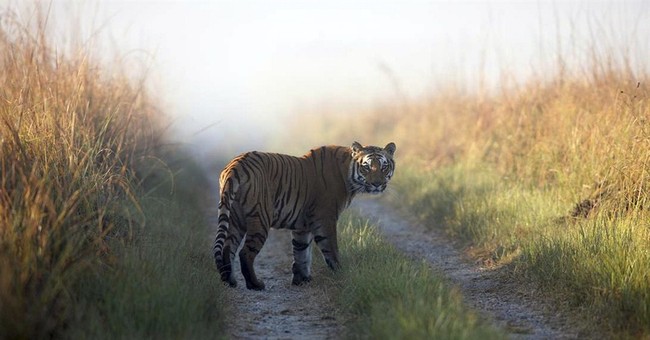 A guy walks into a bar with a tiger… And, no, the guy in question is not Chuck Norris. (Although, if it was, I’m guessing no-one would say anything.) John Basile walked his Siberian tiger into a bar on the outskirts of Chicago, and promptly became the center of attention in a police investigation. In fact, the feline-friendly patron was charged with a misdemeanor and may face jail time as well as a monetary fine.

According to the Chicago Tribune:

John Basile, 57, owner-operator of the Big Run Wolf Ranch, located about three miles northeast of Lockport's downtown, was charged with reckless conduct and keeping a dangerous animal. He could be fined - even jailed - if found guilty of either misdemeanor.

Basile thought nothing of bringing a carnivorous member of the feline family into a bar while he imbibed in a little down-time. He even made mention of the fact that regulars at “Uncle Richie’s Place” know the cat and approve of the exotic pet. Apparently, however, police didn’t like the idea of Basile bringing his cat, named Shere Kahn into a public place. (Wait, his name is Shere Kahn?! From the Jungle Book? Shere Kahn was awesome… I think it was his voice: A cross between Dirty Harry and Bill Buckley.)

The Police Chief explained the obvious: that tigers shouldn't be in restaurants, regardless of whether or not they’re leashed. Of course, the Illinois police officer continued to explain that tigers or, apparently, any potentially dangerous creature (other than drunkards) should not be allowed in places that serve alcohol because "liquor alters their personalities and judgment.”

Wait… Were they serving the tiger an Old Fashioned? (‘Cause that’s kinda awesome.)

But it gets better: The police chief explained that guns are banned from bars "for the same reason we wouldn't want an animal that could hurt a person.” Ok… So leashing a carnivore, from an exotic corner of the earth, is the same thing as wandering into a bar with a loaded 1911? I see some differences. For example, I don’t know of any gun that thinks on its own. (Although, if anyone else knows of one – assuming the gun has a mild temperament – I’d love to know about it.)

Besides, I think a leashed tiger is a reasonable alternative to armed self-protection. There’s nothing like black and orange carnivorous rage on the end of a leash to give you that warm-fuzzy feeling of self-protection. (Plus, girls dig big cats.) Although, the Police Chief’s point is well taken: Drunk people do stupid things. (Like bring tigers into bars.) Of course, if any bar-going-patrons – regardless of their drinking habits – decided to harass a tiger, they probably deserve whatever “natural selection” throws at them. (Ask Darwin… He’ll back me up on this.)

I’d have to say it’s pretty obvious that we need some sort of Tiger Control in Chicago. Maybe we could limit the number of stripes, or require some sort of registration scheme for carnivorous cats in the greater Chicago area? (I can see the number of drive-by-maulings rise precipitously in the coming months without some sort of legislative action.)

Did Basile show some poor judgment by bringing an exotic animal into a place of public alcohol consumption? Sure… But tigers do offer a less regulated option to personal protection in the city of Chicago than a .38 caliber. After all, walking around with a Jungle-Book-villain is only a misdemeanor; whereas a concealed .38 might get you feed to the lions (metaphorically). Apparently having a concealed feline, on or about your person, is less felonious than arming yourself with a Smith & Wesson. (I would actually suggest a Colt 1911, or a Springfield XD… But it didn’t phonetically fit the format or the phrasing of the sentence.)

The Police Chief’s comparison to firearms was really the only issue I took with the story. A tiger, by all metrics available to me, is not the same as a gun… In fact, loaded firearms might be just the thing to protect the general public from Shere Kahn’s eventual decline into a carnivorous rampage. (You’ve seen the movie, right?)

Chicagoland… Where you’re more likely to run into a tiger in a bar than a someone with a concealed carry permit. I feel safe just thinking about it.

PS: I now may have something else to add to my list of things to buy when I make millions… Still on the top of the list: a tank. I’m often asked where I would park a tank… I think the obvious answer is: “Anywhere I want.”