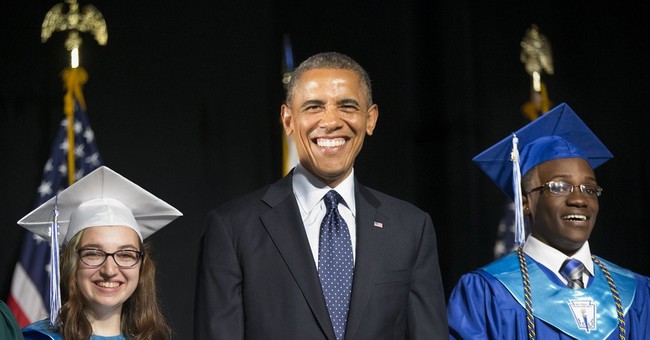 He can’t help it. Really, he can’t. Given that Barack Obama has spent essentially his entire “professional” life campaigning, I guess it’s hard for him to shake it. During a commencement speech to a bunch of kids who are barely old enough to vote, he made sure to take a couple of digs at the GOP, then encouraged the youngsters to cast their ballots for Democrats. Like a political hack blundering through a stump speech – rather than the President of the United States addressing the graduation class at Worcester Technical High School – he accused the GOP of being un-American, and keeping kids out of college.

According to the Washington Times:

At the mention of the GOP, some graduates began to boo.

Wait. Why did he feel compelled to mention the GOP in a commencement address? Oh, that’s right: He’s the greatest bi-partisan President ever... So naturally there was a little political stumping while he gave words of wisdom to a crowd of high school seniors.

“Don’t boo. Just remember to vote,” Mr. Obama said. “I know it’s frustrating for parents, for students who are working hard and doing everything right. There are too many politicians in Washington who don’t have the right priorities. We need to straighten them out. Maybe they forgot where they came from, and who invested in them along the way. And when a bill to help you pay off your college doesn’t pass, it’s a disservice not only to your generation but to our history as a nation that strives to put quality education within reach of every American.”

Whoa… Slow it down, Mr. President. If a family was “doing everything right”, I’m guessing they wouldn’t actually have to borrow tens of thousands of dollars to go to college. Right? And let’s get something straight right away: Making it easier for kids to go into debt – and making it easier for that debt to haunt them for decades – isn’t the definition of compassion.

Besides, is shilling for a political party really the “grown-up” thing to do at a commencement ceremony? I mean, you’re really so desperate for a little bump in your approval numbers that you’re going to stand in front of a group of teenagers and try to bribe them with low-cost loans for college? And just imagine: Most of these kids probably think that bankers are the predatory lenders. Little do they realize that the US government is the one that will give them a loan (no questions asked) for tens of thousands of dollars without even considering whether or not repayment is possible. I mean, heck, at least bankers have a driving interest to make sure you’re signing a loan that won’t drown you financially. (It’s called the profit motive. Believe it or not, banks like it when people can pay back their loans.)

The Campaigner in Chief’s assertion that Republicans just “forgot where they came from” might have been the most insulting passage of his campaign commencement address. Remember when he said “you didn’t build that”? Yeah… This is an echo of that same theme. People who have worked their way through college, or diligently paid off their loans upon graduating, apparently don’t exist.

In the President’s mind, the reason the GOP deserve some chiding during an address to high school graduates, is because Republicans dare to believe that people can actually accomplish great things without the intervening hand of government.

Honestly, I feel bad for the students. (Yes… Even the ones that cheered him on.) They were hoping to hear the President of the United States speak to them about moving forward into another chapter of their young lives. Instead, they heard cartoonish arguments for the Democrat Party, from a petty political hack.

He should have just stood before the crowd and said “Vote Democrat… Because you can’t actually do anything on your own.”