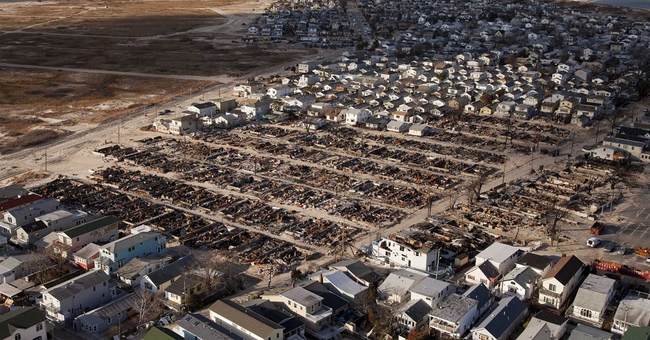 It might seem laughable that FEMA – the Federal organization that eventually melted over $12.5 million worth of ice after Hurricane Katrina – has created a website focused on preparing individuals for eventual disaster. Yes, the organization that closed their Staten Island office because of bad weather after Tropical Storm Sandy, is now providing helpful suggestions for emergency preparedness. The project, on its face, is almost as comedic as the Federal Government’s “Feed the Pig” campaign to encourage saving for retirement. My first reaction to the government telling me to spend less money, or prepare better for emergencies, is “you first”.

You have likely heard FEMA’s Public Service Announcements on a local radio station. “Be prepared. Make a plan. Build a kit.” Be prepared for what? Well, anything. Be prepared for a wildfire, urban rioting, terrorist activities, or even the zombie apocalypse.

Feeling a little insulted that the government assumes my stock pile of ammunition and MRE’s weren’t enough, I decided to check out what suggestions the Federal government had for my family’s wellbeing in the event of a disaster. I’m now feeling pretty over-prepared.

A repeated theme on the ready.gov website was to “watch TV, listen to the radio or check the Internet often for information or official instruction as it becomes available.” Right. . . Because nothing screams preparedness like gluing yourself to sensationalized news coverage, waiting like a very patient drone for government sponsored directions. So, in between Facebook updates about your time in the midst of a hurricane, maybe you can just click over to the Drudge report every now-and-again. Of course, I’m sure FEMA would appreciate diligent observance of MSNBC or PBS coverage instead; but they didn’t specify.

The website also had an entire section on building an emergency preparedness kit. Finally, I thought, some useful information. Of course, when I put together my own kit for emergency preparedness, I ended up on several government watch lists and on an ammunition manufacturer’s preferred customer list. Which raises another point, there was a conspicuous absence of any self-defense tools such as handguns, rifles, or even Joe Biden’s favorite: the double barreled shotgun. I guess their kit wasn’t designed for surviving civil unrest or the zombie apocalypse after all. (Shame. I had my Zombie killing music playlist all set for the occasion.)

On their list of must-haves for any family’s preparedness kit was a “dust mask to help filter contaminated air”. . . I would prefer a surplus Israeli gas mask with type 80 canister filters. But, sure. . . A dust mask is a good start. It will really help protect against those obnoxious “high smog” emergencies.

They also suggested extra cell phones with chargers, inverter or solar chargers (stay environmentally friendly, and prepared for a power outage). Presumably this is so you can check the internet frequently for updates on the progressing hurricane, mass terrorist attack, or zombie apocalypse. It would also allow you to call your friends or family, since cell phone carriers never have downed service in emergencies.

One of the more comical portions, however, was an “Emergency preparedness form” you could download. The form had spaces for all your sensitive information, including social security number, full names, addresses, date of birth, and school/ work location. Knowing this government, I’m kinda surprised it wasn’t already filled out.

The website was incomplete, and provided only enough information to give a completely clueless individual (of which there are, admittedly, a plethora) a vague notion that “hey. . . Maybe you should have enough food in your home to wait for help to arrive.” Which really seemed to be the aim of the site: to give people enough information so that they might survive long enough for FEMA to arrive with brand new trailers, $12.5 million worth of unusable ice, and little plan of action.

The ready.gov campaign reeks of the same ineptitude, and disingenuous effort as the “Feed the Pig” campaign. After all, what happened to the people who were ready for Katrina? Their rifles were seized by coast guardsmen, national guardsmen, and police men as they tried to get their families to safety. What happened to the individuals who stock piled food, clothing and supplies before Sandy? They were told they had to share their resources with the community.

While the intent of the website might be admirable, it was telling. Even when the government tries to do the right thing it falls astoundingly short of ideal. And this is the larger point at issue with the Federal Government’s attempts to be the answer for every problem in citizen’s lives: The Feds will always be incapable of tailoring information, regulation, or suggestions to individual needs or circumstances. This is why expanded financial regulations fail. This is why Obamacare will fail. And this is why our nation has survived largely off of private charity, individual responsibility, and an independence from Government coddling.

The website was one more illustration of the Federal government’s unfamiliarity of everyday reality. Written by a bunch of government paid bureaucrats, the campaign fails to address the very real needs of families, and individuals, who might find themselves in harm’s way. Although. . . It was admittedly better than Joe Biden’s home defense instruction.