Sick of the Media Hype

Michael Reagan
|
Posted: Feb 29, 2020 12:01 AM
Share   Tweet
The opinions expressed by columnists are their own and do not necessarily represent the views of Townhall.com. 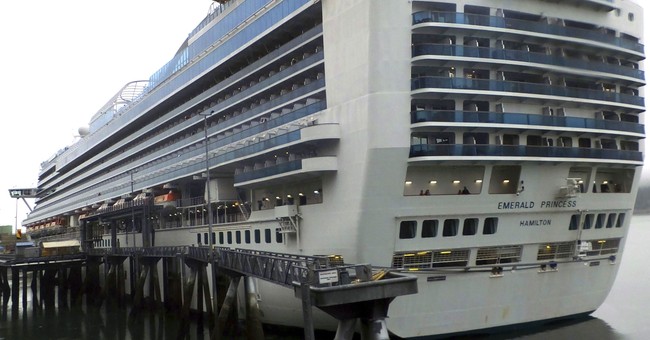 Two weeks ago, I was happily sailing on a huge cruise ship in the Indian Ocean.

My wife Collen is a travel agent and I was tagging along with her and her group on a Celebrity Cruise Line ship as it sailed from Dubai to Singapore and back with 2,300 souls aboard.

Everyone on board our ship knew what was happening that same week to the unlucky people stuck on the Diamond Princess cruise liner docked offshore Tokyo.

Because a passenger who left Diamond Princess nine days earlier in Hong Kong had tested positive for the new coronavirus sweeping China, the Japanese government had ordered everyone to stay aboard the luxury cruise ship.

But we knew that cooping 2,666 people together on the Diamond Princess for 14 days was going to be trouble - and it was.

Because Japanese officials dithered around and then screwed up their containment measures on the ship for two weeks, the Diamond Princess became what the New York Times called "a floating epidemiological disaster."

According to the Times, "with 634 infections and two deaths, the cruise ship represents the largest concentration of coronavirus cases outside China."

We were a lot luckier, even though we never made it all the way to Singapore.

Our wise captain decided it wasn't worth the risk of getting any closer to the epicenter of the coronavirus outbreak and we turned back to Dubai after stopping at Sri Lanka.

The Celebrity Cruise Line people did everything right. Everyone was compensated for their lost cruise time and given $500 to pay for straightening up their travel arrangements.

Most important, as far as I know, no one on our cruise ship caught the flu.

Since I've been back in Southern California, however, I've been getting sick watching the mainstream media sensationalize the dangers of the coronavirus.

Every time another country like Brazil gets its first official coronovirus case, they throw up another panicky headline about how the deadly pandemic is putting every human on the planet at risk.

The mainstream media rarely take the trouble to point out that it is the already sick, the very old and the very young who are most likely to die from flu-caused problems like pneumonia, strokes and heart attacks.

The coronavirus may yet live up to its media hype and become a true pandemic in the United States or elsewhere that kills hundreds of thousands.

But as the stock market dropped a few thousand points this week on the Dow Jones, it'd be a nice public service if the media put the death toll of the coronavirus in the proper perspective.

President Trump did exactly that during his press conference on Wednesday.

He pointed out to the entire country that old-fashioned Asian flu - the regular kind of constantly changing viruses that many of us take shots for every year - kills from 25,000 to 69,000 Americans a year.

When President Trump admitted he was "shocked" to learn that the "regular" flu was so deadly, he was of course mocked for his ignorance by the mainstream liberal media and their Democrat pals.

They would like you to think President Trump is the only person in America who wasn't up to speed on America's annual flu deaths, which actually are statistical estimates made by the Centers for Disease Control.

But I bet most Republicans and Democrats were unaware of how deadly the "regular" flu is.

For example, did you know that 2017-2018 was one of the deadliest flu seasons in our history?

Do you remember the scary media stories, the doomsday predictions, the panic in the streets, the stock market crash of early 2018, the soccer games played in empty stadiums, the closing of public schools?

Neither do I -- and neither do the media.