Michael Reagan
|
Posted: Feb 03, 2018 12:01 AM
Share   Tweet
The opinions expressed by columnists are their own and do not necessarily represent the views of Townhall.com. 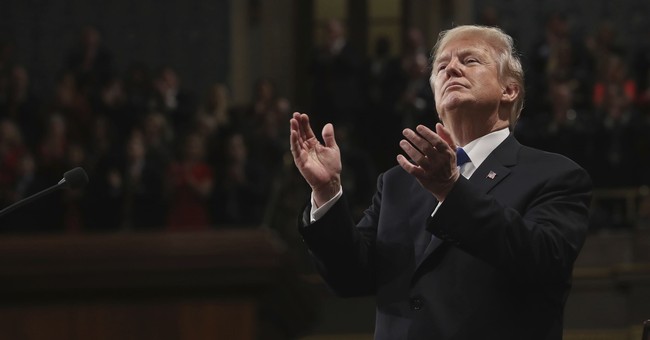 Donald Trump sure hit it out of the park Tuesday night.

Like millions of other people in America who tuned in to the president's first State of the Union Address, I'm still cheering.

I wasn't in Washington, in Soviet California, or anywhere else in Trump's America.

I was actually on a cruise ship with my wife on the other side of the world in the Tasman Sea between New Zealand and Australia.

After I watched Trump's prime-time TV address live in my cabin on the Celebrity Solstice - Wednesday afternoon, my time - I tweeted that it was so phenomenal I wanted to watch it all over again.

I wasn't kidding - or seasick.

I hadn't heard such a great speech by a president in a long, long time. And 75 percent of its 46 million viewers said they liked it, too, according to the polls.

The Hate Trump Media disagreed, of course. They thought the address went on too long.

But that was because they couldn't wait to start picking it apart for being too gloomy, too mean to illegal immigrants or for mentioning "America" too many times.

Trump was interrupted more than a hundred times by the applause of everyone in the chamber except a bunch of bitter and sullen Democrats.

The Democrats - some of them dressed in black as part of some phony protest - refused to show the slightest sign of approval for the president when he pointed out how well America's workers and the economy are doing.

Republicans stood and cheered every time.

Democrats sat and stared with their arms folded.

Or they showed disgust by rolling their eyes or making hideous faces that the GOP is already turning into deadly TV ads for the fall election.

The Democrats couldn't have clapped for President Trump even if they wanted to - even if he had brought Nancy Pelosi back from the dead - because they were sitting on their hands.

What the Democrats did to disrespect the president with their body language and petty behavior only helped the president, who proved he knows a thing or three about staging a state of the union address.

My father was the first to invite special guests or heroes to the address, where he could introduce them, praise them and tie them to what he'd say in his speech.

And on his first try President Trump has perfected the idea.

Every person he introduced during his speech told a story he wanted to tell, from the New Mexico policeman and his wife who adopted the baby of a heroin addict to the business owners who gave their employees bonuses because of Trump's income tax cuts.

For a long time I've been waiting for the president to deliver a great quote that would outlive his presidency - other than his latest tweet.

My father and John F. Kennedy did it many times.

And on Tuesday night I think Trump finally did it when he said it was his duty - and the duty of every elected official in the chamber - to defend the right of every American "to the American Dream. Because Americans are dreamers, too."

For me that was his best moment.

Everyone watching had to agree with the fact that everybody in America is a dreamer - except of course the Democrats and their teammates in the liberal media who saw Trump's statement as a cruel insult to the DACA kids who were brought here illegally at a young age.

The Democrats will never admit it, or understand it, but they hurt themselves badly Tuesday night.

They looked like a bunch of losers and only made the president look better, more reasonable and more presidential.

They also proved that they hate Trump more than they love America.

And they did it in front of millions of American voters as the president was giving his best speech yet.