Michael Reagan
|
Posted: Feb 03, 2017 11:05 AM
Share   Tweet
The opinions expressed by columnists are their own and do not necessarily represent the views of Townhall.com. 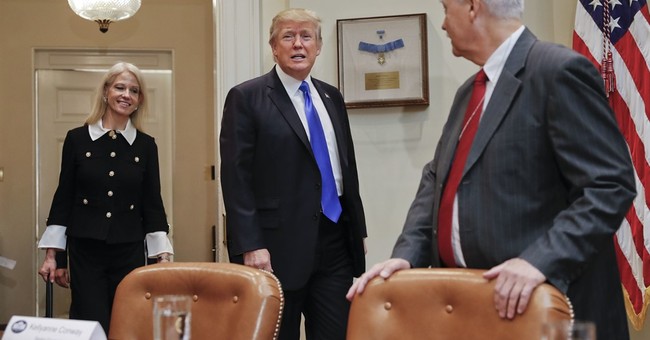 The Trump Train is rolling on.

It's going so fast and in so many directions at once that its critics can't catch up.

All week long President Trump has filled the headlines with news.

He's nominated Neil Gorsuch -- a great judge who understands and reveres what the Constitution says, not what he'd like it to say -- to fill Antonin Scalia's un-fillable seat on the Supreme Court.

He's seen his major cabinet picks at State, Treasury, the EPA, HHS, etc., finally get confirmed, despite the whining and foot dragging of Senate Democrats.

He's issued executive orders on taxes, regulations and who knows what else.

And he's had tough-guy Michael Flynn, his National Security Advisor, sternly warn the Iranians that we're no longer going to stand idly by as they make trouble in the Mideast and test-rattle their ballistic missiles.

By the time this column gets into print, we could be invading Yemen.

Things are happening fast in Washington - at "Trump Speed," as someone has said.

It seems like a month ago that the Trump administration's so-called "Muslim ban" was announced, but it was actually only last week.

The president's executive order restricted travelers from seven terrorist-breeding countries from coming into the USA for three months, and also suspended the refugee program for four months until a better system of vetting could be devised.

The whole thing was a total political and public relations disaster for the president - a textbook example of how not to communicate to the American people.

What President Trump should have done was address the country from the Oval Office, fully explain what he was about to sign and then sign it.

He should have pointed out that it was temporary, that it was based on national security and geography, not religion, and that the seven countries listed were the same ones that had been singled out by the Obama administration as terrorism incubators.

All the problems and confusion and minor tragedies at airports for incoming travelers should have been foreseen and should never have occurred.

All the liberal howlings that Trump was discriminating against the Muslim religion or that the ban was unconstitutional would not have been eliminated, but they would have been blunted.

The crowds of knuckleheads who protested at airports still would have shown up with their pre-printed anti-Trump signs, but they would have been much smaller.

The whole fiasco showed that Trump and his team are still rookies who have a lot to learn about planning, explaining and spinning their executive edicts and decisions.

Trump got a D- for his "Muslim ban" announcement.

But the media got a solid F for the sloppy, misleading and partisan way they covered it.

In their fervor to get Trump they didn't bother to point out that President Obama's administration had slowed down the processing of Iraqis refugees coming to the U.S. for six months in 2011 for security reasons.

The most outrageous thing the media did was to fan the idea that an executive order aimed at regulating the freedom of foreign visitors was unconstitutional.

It was perfectly constitutional. The U.S. Constitution doesn't apply to foreign visitors.

The only people who have the constitutional right to come into the U.S. are American citizens.

Every country has restrictions for its visitors. For example, you don't have a right to go into Canada if you have a DUI.

It's an extreme tough rule, but I don't see the ACLU or Alcoholics Anonymous demonstrating against Canada.

If anyone was responsible for all the sign-waving protesters who clogged up our airports last weekend, it was the dominant liberal media ---- which is clearly interested more in bashing Trump and getting ratings than the truth.