The Consequences of Your Vaccination Decision 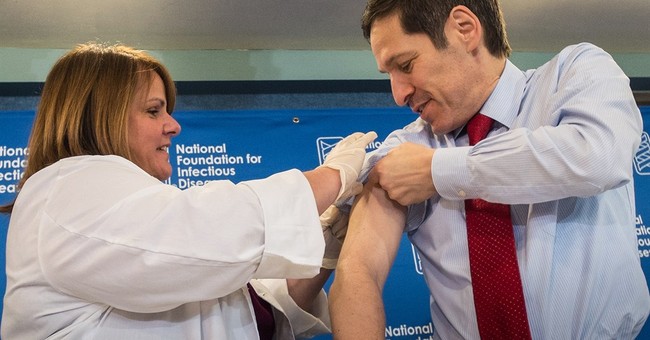 California is experiencing an entirely new disturbance in the Force.

The Magic Kingdom has become the Measles Kingdom. Disneyland is ground zero for the largest outbreak of measles in the last 15 years. So far more than 100 cases have been reported since the initial exposure, some from as far away as Boston. (Rest assured, Mickey and Goofy are still fine.)

This makes last year's fear of an Ebola outbreak spreading across the nation look even more prescient and the sleepy, lethargic response of the CDC look even worse.

Measles was so rare it was one of those diseases that I feared environmentalists would try to put on the endangered species list. When I was a boy, mother's used to have an informal measles network. When one child came down with it, the other mothers would rush their kids over to be exposed, so they could get the illness and be done with it. This was also the procedure with chicken pox.

But with the development of safe, effective vaccines, measles almost disappeared. I was anticipating a measles exhibition in the Smithsonian to mark the date when it finally vanished, but I didn't anticipate Jenny McCarthy would stop flaunting her boobs and start preaching to boobs.

McCarthy - a former Playboy centerfold - and a "doctor" whose medical license has since been revoked, began warning the public about a non-existent connection between measles and autism. Most of us simply ignored her misinformation, but a recent study showed the two demographics where McCarthy's message made inroads were Americans with very little education and those with advanced degrees.

Presumably both demographics include Disneyland patrons.

As a result gullible parents have been refusing to have their children vaccinated. For a while this is fine. These parents are parasites depending on the good sense of those that do vaccinate their children to keep the disease rare enough to protect the unvaccinated. But now we may be past the tipping point where so many children are unvaccinated that epidemics can break out

This means there is more to consider than the expense when contemplating being trapped inside a submarine on the Finding Nemo ride.

Some in the medical profession have taken note and are taking sensible steps. The Associated Press reports Dr. Charles Goodman, a pediatrician in Los Angeles, has banned unvaccinated children from his office: "Parents who choose not to give measles shots, they're not just putting their kids at risk, but they're also putting other kids at risk - especially kids in my waiting room."

And Dr. Goodman is not alone.

But there are complaints from mothers unhappy that little Typhoid Mary can't visit the doctor. Dotty Hagmier, founder of Moms in Charge, told AP that mothers are feeling "betrayed and upset." Just like the moms whose kids become ill because of her negligence.

The decision to vaccinate or not vaccinate belongs to the parents, but the parents should also be responsible enough to live with the results of their decision and demand the rest of us be put as risk because they chose to take their medical advice from a Playboy bunny.