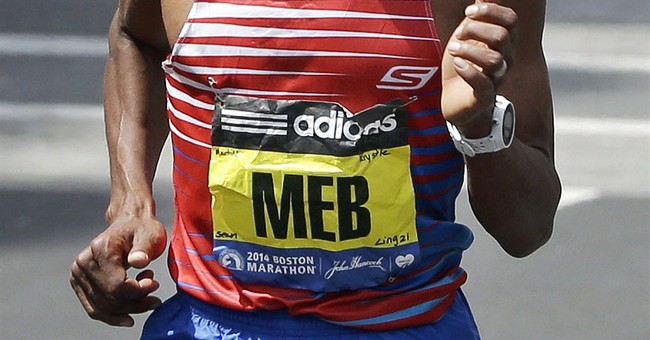 It was nice to be away from politics for a week.

It was even nicer to be in the great city of Boston for six days to celebrate the running of the 118th Boston Marathon.

Watching the race with a million people - and meeting so many wonderful Bostonians - was an incredible experience.

A year after two domestic terrorists killed three and maimed 260 others watching the famous race, 32,530 runners set out for the finish line on Monday.

Most of the runners were there this year for a special reason - to show up and show the world their resiliency and defiance.

As the race announcer told them at the start of the race, they were there to "take back the finish line" from those who would try to scare us or do us harm.

The world's most famous foot race is held on Patriots Day and the whole city is consumed by the event and its buildup.

The Red Sox always play an 11 a.m. game on Marathon Monday, so it's possible to see the ballgame at Fenway and still get to the finishing stretch on Boylston Street before the race ends.

My wife Colleen, daughter Ashley and Jerry, a friend from Utah, ran in the race while my son Cameron and I went to the Red Sox-Orioles game.

Between innings the big screen on the scoreboard put up the names of the marathon's top finishers.

When the crowd of 37,513 saw the winner was an American - Meb Keflezighi of San Diego by way of Eritrea - it jumped to its feet as one and started chanting "USA, USA, USA!"

It was an incredible moment.

When I went over to Boylston Street to watch my wife and daughter finish their race, it was so crowded I never made it to my grandstand seats.

But I saw some great moments from the sidewalk.

I saw a bare-chested man pass by who had shaved his amazingly hairy chest into the image of the American Flag.

I saw the employees of the Marathon Sports outlet on Boylston Street close up their store and come out to cheer on the owner as he ran by.

I watched and applauded as the beloved father-and-son running team, the Hoyts, came into view.

As the crowd cheered them on, Dick Hoyt, 73, pushed his son Rick Hoyt, 52, in his custom-racing wheelchair. It was their 32nd marathon as a duo, and their final one.

Last year was supposed to be the Hoyts' final race, but the bombing cut their run short. They decided to return this year for personal reasons and to honor last year's victims.

I watched and applauded one of those bombing victims - a young woman who'd lost part of her leg - run past wearing a prosthetic. Talk about spirit and resilience.

Everyone was an America - and proud to show it.

What the city of Boston and its great citizens showed me was that we're really not that different under our political labels. We can unite around our core values and make it back from adversity.

The marathon went off without a hitch. It was safe and secure and devoid of politics. And it was a celebration of the American spirit in a place where that spirit was born.

When I flew from Boston on Wednesday bound for Rome, where I'd attend the canonization of Pope John Paul II, I left with renewed hope for the USA and a better feeling about its people.

Boston made me proud to be an American. My week there reminded me that despite all the partisan politicking and bickering we do, we're still capable of joining together to show who were are and what we stand for.