The Failure to Administer Justice -- Another Lockerbie Tragedy 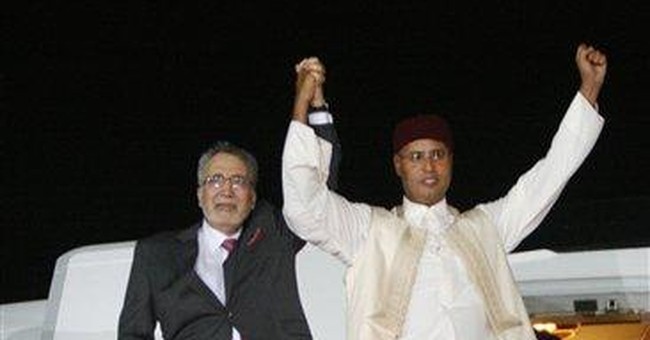 At a time when civilized nations are continuing to wage a collective and challenging fight against terrorist organizations, and the rogue nations that harbor them, this week's release by Scottish officials of one of the masterminds behind the 1988 Lockerbie bombing constitutes a major setback. Just as importantly, it has had a devastating effect on the families and friends of those lost at the hands of the cold-blooded killers.

As many of you will recall, on December 21, 1988, a few short days before Christmas, a 747 en route from London to New York was downed by a bomb detonating while the plane was over the now-famous Lockerbie, Scotland. All 243 passengers and 16 crew members (189 of which were U.S. citizens) were killed as well as 11 innocents on the ground - one of the most shocking and costly terrorist acts preceding the events of 9/11.

Shortly after the conclusion of an intense investigation, the United States and British authorities indicted two Libyan intelligence agents for their roles in the bombing -- in essence, concluding that the bombing was authorized by the Libyan government and carried out by the named suspects.

After several years suffering at the hands of strict international pressure and resulting sanctions, the Libyan government finally agreed to extradite its two indicted agents for trial by a Scottish court. In 2001, one of the former Libyan intelligence officers, Abdelbaset Ali Mohmed al-Megrahi, was convicted and sentenced to life in prison for the murder of the 270 victims -- carrying a stipulation of a minimum of 27 years imprisonment under Scottish law.

Yet, in an unprecedented and mind-numbing turn of events, this past week, Scotland's "Justice" Secretary, Kenny MacAskill, released the un-repentant al-Megrahi on compassionate grounds after he served a mere eight years of confinement. (al-Megrahi is said to have only three months to live as the result of prostate cancer.)

Making matters worse, al-Megrahi was received as a hero upon his arrival in Libya, and when he addressed the Libyan and Scottish flag-waving crowd; he continued to stand by his insistence that he was wrongly convicted. That's right -- Secretary MacAskill released a mass murder who has not even accepted responsibility for the actions that led to his conviction.

Following the release, FBI Director Robert Mueller aptly pointed out that, in total, al-Megrahi "served less than 14 days per victim" for his role in this mass murder. Fourteen days for the planned killing of a plane full of innocent passengers. a mere fourteen days for the killing of countless parents, siblings and even young children.

America's justice system has come under much scrutiny in recent years. Indeed, in today's complex world, decisions must be made quickly while still weighing the protection of innocent persons against terror against the proper treatment of prisoners. At times, in retrospect, our quick decision may not have always be the best option, but in all of this debate, no one has denied the need for a firm moral code and legal guide in our justice system, and that code should indeed include compassion.

But where the Scottish government has failed in this is acknowledging that we must have compassion for more than just the perpetrator or the indicted. In attempting to demonstrate mercy towards a convicted terrorist and mass murderer, they have failed to demonstrate compassion towards his victims' loved ones. More than that, they have disregarded all implications for the future -- not considering what this man is capable of, nor the impact his release will have on the dynamics of an entire international system.

In the midst of the miscarriage of justice, I mourn with the families whose loss has been treated so cavalierly. And as we continue to wage the battle against terrorism, I can not help the sick feeling in my gut as a murderer is welcomed home to cheering crowds.