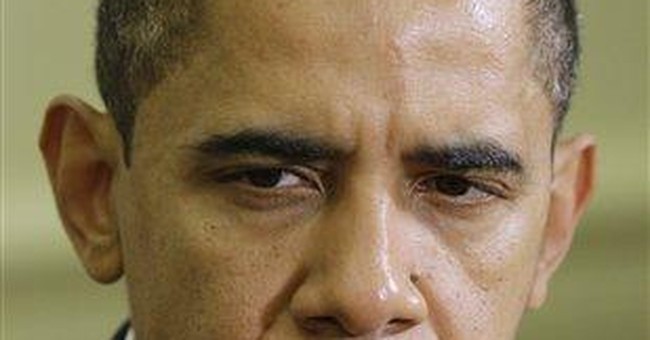 In the Age of Obama, all dramatic developments connect somehow to the Dear Leader himself even a seemingly frivolous distraction like Balloon Boy. In fact, the strange but thoroughly publicized non-flight of young Falcon Heene offers unexpected illumination on the essential appeal of Obamanism.

For three hours on Thursday, October 15, the cable networks dropped all other stories (ironically including the presidents visit to New Orleans) to provide wall-to-wall coverage of a homemade Mylar weather balloon blowing at random across the Colorado skies. In every corner of the country, people turned aside from their normal routines and gathered around any available TV screens to watch the crude, silvery, windblown sack of helium; in many cases, they prayed, either silently or openly, for a safe landing of the odd craft with its supposedly precious cargo. When the balloon came to earth with no child aboard, the story seemed to take a dark and perhaps tragic turn as authorities began searching a fifty mile radius to find the remains of an adorable six-year old who had either fallen or jumped in the midst of his airborne adventure.

The belated discovery of the missing kid, and the revelation that Falcon had never taken flight in the first place, brought relief and joy on the one hand, but also an unmistakable sense that the unfolding events had cheated the public. Not only had the networks failed to deliver on an implicit promise to locate and exploit some gruesome splat of blood and bone that might have elevated a diverting but meaningless tale to the level of heart-breaking disaster, but the sudden reappearance of the purportedly imperiled protagonist exposed all the breathless viewers as so many suckers.

After all, we had spent hours riveted by images of an empty, aimlessly drifting balloon, with nothing at risk beyond the colossal waste of time and money on the part of gullible millions. Even before the suspicions and ultimate exposure of the Heene hoax, the lack of any satisfying denouement --- either miraculous rescue or tragic accident left a sour taste about this short-lived national craze. The likelihood that the family deliberately staged the entire episode certainly intensified, but didnt initiate, the underlying sense that wed been had by the whole sorry spectacle: taken in by some utterly meaningless stunt, whether or not the Heenes knowingly deceived the authorities.

The most intriguing question about the afternoon and evening of Balloon Boy requires an uncomfortable what if line of inquiry: what if the boy had indeed been on board his fathers now-identified flying object, with its telegenic flight resulting in either his deliverance or death? Would such an undeniably dramatic outcome have made the episode any more worthy of obsessive national attention? Would the hours devoted by the multitudes to the uninterrupted live coverage of the Colorado caper have constituted any less a waste of time? In what way would a boy-bearing-balloon have enriched our lives any more substantively than a boy-free-balloon?

This bamboozling embarrassment fascinated the nation regardless of the absence of real stakes, or the crude manipulations of a publicity-starved dad. Balloon Boys appeal depended on the two top attractions of all successful televised events: excitement and immediacy. Broadcasts provide the greatest voyeuristic thrill when they offer tense moments with uncertain outcomes but with, ultimately, clear winners and losers like sporting events, movie awards shows, and election nights. We cherish coverage that allows us to believe that were part of unfolding historyviewing occurrences of epic significance or grandeur. We escape from the dull, predictable aspects of our own lives into a world that seems bigger and better, in part because it provides more clearly delineated climaxes, with either triumphs or tragedy. At the moment, those of us who love the national game enjoy the season of baseball playoffs, when even non-fans overhear the promiscuous sports casting deployment of terms like historic, heart-breaking or unforgettable to describe various achievements or failures on the field.

Though Balloon Boy briefly upstaged even the president, Barack Obama offers the same powerful appeal. His style of governance, based on the model of the permanent campaign, pledges to identify recognizable winners and losers in every confrontation, representing another step forward in the ongoing attempt to transform politics into televised sport. The notion that the president might make important progress in private or gradually or without great fanfare is utterly foreign to this administration. The old Cartesian formula of I think therefore I am has been modified to the far more media friendly I speak therefore I am. A day without some televised Obama pronouncement (or four or five) is a day without sunshine from the Sun King. No president-- not even presidents who served two full terms delivered more big speeches than this chief executive has provided in a mere ten months. And every single one of these epochally eloquent addresses counts as automatically dramatic and historic. (Just think about his historic speech to the Muslim world in Cairo, or his dramatic healthcare address to Congress, or his unprecedented presentation to the International Olympic Committee in Copenhagen - or, maybe better to forget about that last one).

The Obama way involves big gestures, florid claims, urgent declarations, unceasing storm-and-stress, and promises of imminent deliverance or destruction depending on whether the Maximum Leader succeeds or fails. The silvery balloon ascends thrillingly skyward, though no one knows either its flight plan or what it carries inside. A weary, battered nation gets no chance to catch its breath or get its bearings. The artificial deadlines the Miracle Man adores closing Guantanamo in one year, a final vote on health care reform by August (ha!), Cap-and-Tax by years end (now fortunately abandoned), cutting the deficit in half by 2013 (really?) these ridiculously rushed timetables also fit the manipulative patterns of his TV presidency.

By definition, watching the tube is an impatient indulgence, with spectators craving the immediate satisfactions of a games final seconds, or a dramatic shows scheduled conclusion with all plot lines neatly resolved. The Obamanauts deeply fear the possibility that their most devoted followers will soon pick up the remote control and switch channels on them, moving on to a fresher fetish or fad. In fact, the increasingly audible rumblings of frustrated interest groups (gay activists, immigration reformers, unions, environmentalists) echo a deep-seated indignation that ten months of historic, dramatic speeches failed to produce the instant transformations universally expected.

The mature realization for both the electorate and individuals must involve the value of incremental change, of slow, steady progress toward goals, of quiet but lasting rewards earned through discipline and deferred gratification rather than showy spectacle or tube-ready extravaganzas. As a nation, wed be better off without the all-or-nothing attitude toward health-care reform as the president and his minions insist on either a sweeping, glorious victory for which Democrats can claim exclusive credit, or a shattering, tragic defeat for which they can blame Republicans. Personal happiness and national advancement derive from precisely those routine and reliable processes from which TV addicts yearn to escape. As a formula for satisfaction, its an obvious mistake to turn away from your work or your family dinner to monitor the progress of Balloon Boy.

Nevertheless, we fell for the story in part due to its novelty: no one had ever seen anything quite like it before-- just as Obamas acolytes insistently remind us weve never seen a president quite like this one. Of course, there are millions who will continue to watch in spite of all frustrations, but with a gradually developing sense that theyve been conned. Like the infamous craft that took to the October skies in Colorado, the administration is glittery but empty, puffed up and lighter than air, inflated and rudderless with destination unknown. The entertainment value is undeniable, but with the Obama balloon the risks are far too real.