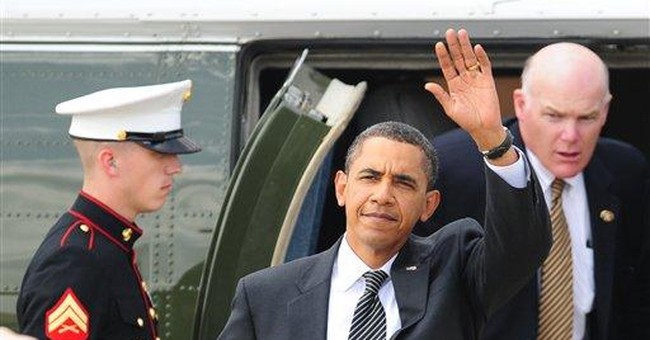 Everyone knows that Americans are bitterly divided over politics but what is the fundamental nature of that division? What is the core disagreement that separates conservatives from liberals, right from left?

Norman Podhoretz provided a provocative and persuasive answer to that question in a recent Wall Street Journal column (September 10) based on his new book, Why Are Jews Liberals? Podhoretz wrote: The great issue between the two political communities is how they feel about the nature of American society. With all exceptions duly noted, I think it fair to say that what liberals mostly see when they look at this country is injustice and oppression of every kind economic, social and political. By sharp contrast, conservatives see a nation shaped by a complex of traditions, principles and institutions that has afforded more freedom and, even factoring in periodic economic downturns, more prosperity to more of its citizens than in any society in human history. It follows that what liberals believe needs to be changed or discarded and apologized for to other nations is precisely what conservative are dedicating to preserving, reinvigorating and proudly defending against attack.

The bitterness of the current health care debate demonstrates the power of this important insight. Liberals invariably plead that the United States must follow the example of Britain or France, Canada or Cuba, and expand the governmental role in medicine to guarantee health care as a sacred human right. The left insists that despite the high cost of American medical care we actually lag far behind more enlightened countries in health outcomes. Conservatives, on the other hand, while decrying the rise in costs, cite the many ways that the US system leads the world (in technological breakthroughs, as well as responsiveness where America is ranked number one by the World Health Organization of the UN). Conservatives want other countries to learn from us and follow our example; liberals long for the United States to learn from our European counterparts and to follow their example.

In international affairs, similar differences apply. The left wants the United States to act multi-laterally at all times and in all things, emphasizing the danger that well probably make a mistake if we go it alone and ignore world opinion. The right concentrates on the need for American power in the world and stresses the positive role played by this country in every corner of the globe. Conservatives worry that if we wait for other (and often corrupt) international powers to join us in every endeavor, well make a mistake by abdicating the leadership role only we can play by deferring to world opinion.

When it comes to the nations history, the divisions between left and right remain similarly stark. Liberals stress U.S. guilt for slavery, mistreatment of Native Americans, and more than a century of imperialist adventures oppressing nations around the world. The right dwells on the way that America introduced ideals of liberty to all of humanity, gave rise to the planets first anti-slavery society, and rescued the earth from two world wars and the danger of international communism.

The opposing instincts toward America also help explain the liberal-conservative arguments over religion and its role in our society. All recent polls show a vast difference in political alignment between those who place a priority on traditional faith and those who describe themselves as irreligious or unaffiliated. From the days of our Puritan and Pilgrim forefathers, the people who inhabited the New World always placed a higher priority on religious practice and Biblical beliefs than the communities they left behind in Europe. In the 1830s, the French observer Alexis de Tocqueville singled out the powerful influence of fervent Christianity as perhaps the most dominant force in American society, and the clearest distinction between the new Republic and the Old World. Even today, the United States remains by every measure the most religious nation in the western world. For conservatives, the religious character of our past and our people stands as a point of pride; for liberals, its one more reason for embarrassment and apology.

On all of these issues, liberals and conservatives differ dramatically and profoundly. This is not to say that all liberals hate America, or that all conservatives glorify their country unreservedly. But in questions of emphasis the contrast couldnt be more clear: the left stresses Americas failures, shortcomings, hypocrisies, and embarrassments while the right trumpets the nations achievements, blessings, and distinctive advantages. Nothing enrages liberals more than the conservative tendency for jingoistic flag-waving and super-patriotism; nothing bothers conservatives more than the liberal habit of blaming America first and concentrating on historic guilt and present problems.

The more negative attitude by liberals toward the nation in which they live even accounts for the well-known happiness gap in which all survey data shows conservatives as far more satisfied and optimistic about their own lives. Even controlling for factors like race, age, economic and marital status, conservatives top liberals by all measures of happiness (as described in detail by Arthur Brooks in his valuable book, Gross National Happiness.) The liberal embrace of guilt rather than gratitude, and focus on the nations predicaments rather than its possibilities, clearly contribute to the gloomy temperament (and the inevitable calls for sweeping change) that accompany the leftwing world view.

The critical and even fearful attitude toward the United States has come to characterize the left in every corner of the globeand it makes sense to extend the Podhoretz paradigm internationally. Contrasting visions of America distinguish every major conflict in todays world; the role of the United States has been the explosive, polarizing, outstanding international issue for the last twenty years.

In 1989-91, with the Western victory in the Cold War, disputes over American influence and values came to replace the issue that had divided the world for the previous 70 years: the response to Marxism. For more than two generations, attitudes toward socialism and the rise of all-powerful (often totalitarian) governments not only separated the nations of the world, but also characterized political disputes within each nation. The Russian Revolution created the prospect of world-shattering revolt, and conservatives defined themselves by their implacable opposition to that prospect just as liberals argued for the need to embrace or accommodate it. Anywhere on earth, your approach toward Marxist ideology placed you in one political camp or the other, just as your response to Americas influence and example will shape your ideological position from Moscow to Mumbai, from Mombasa to Maracaibo.

Some partisans on the left (in America and around the world) will resist this formulation, insisting that they love the United States just as much as any right winger. The distinction, progressives regularly aver, involves their affection for a perfected America that might, through hope and change, come into existence sometime in the future, or else their nostalgic reverence for an America that once was, but ceased to exist through some malevolent influence (greedy businessmen, the religious right, conniving conservatives, take your pick).

Anyone with a modicum of experience in human relations will tell you that a devotion based on what your love object might become, or may have been in the past, is a suspect and toxic form of affection. If, in a moment of insecurity, a wife asks a husband, Honey, do you love me? the last thing she wants to hear is, Actually, I love the idea of you if you changed completely. In other words, its not advisable to tell the woman in your life that youd adore her if shed only lose fifty pounds, submit to liposuction and breast augmentation surgery, get a new set of gleaming white caps for her teeth, and complete a post graduate degree so shed offer more intriguing conversation.

By the same token, it always seems bizarre to hear liberals insist that they consider themselves committed patriots and enthusiastic America lovers because they love the notion of a new U.S. purged of racism, and pollution, and economic exploitation, and sexism, and homophobia, and Mickey Mouse, McDonalds and the Designated Hitter Rule.

Conservatives have an easier time connecting with the sentiments of everyday Americans because our love of country remains less complicated: we admire and relish and savor the United States just as it is, even with all its quirks and imperfections. For us, the sight of Old Glory in the autumn breeze inspires a sense of instant pride and exaltation, not the bittersweet ruminations of a guilty liberal who automatically evokes embarrassing episodes associated with the flag and sighs over the gap between U.S. ideals and contemporary reality.

The more that conservatives understand and adopt the idea that attitudes toward America divide the left and right everywhere, the better our chances of building durable majorities. The health care debate offers a fine opportunity to spread this notion. While the left hopes that well abandon our distinctiveness and welcome international influence in shaping a new health care system, the right hopes for a clear-cut victory for liberty and against big government a victory that can advance the cause of Americanism as a unique and valuable creed both here at home and around the world.