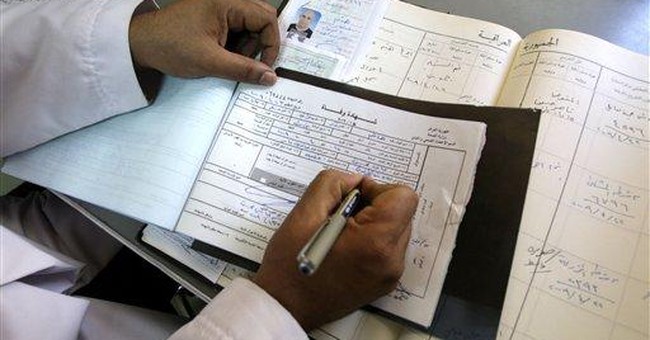 It’s a sure sign of decadence when a society treats dead bodies with callousness, mocking cruelty, levity and disrespect.

A recent headline in the New York Times gave evidence of such degradation while suggesting the sort of outrageous parody best suited for “The Onion.”

“CADAVER SEX EXHIBITION IN GERMANY IS CRITICIZED,” noted America’s Journal of Record and then reported on the latest ground-breaking show by the acclaimed artist, Gunther von Haugen. Herr von Haugen previously inspired controversy with his display “Bodies: The Exhibition,” which toured the United States and featured skinned and preserved human remains. His new triumph, “The Cycle of Life,” features actual corpses posed and frozen forever in a variety of simulated sex acts. While some critics in Berlin complained of the exhibit’s “tastelessness,” von Haugen and his supporters insisted that they used only bodies (and body parts) that came from “voluntary donors.”

The notion that any human being would view his own earthly remains so casually that he (or she) would welcome their deployment before gawking strangers as skinned sex toys in an avant garde art exhibit represents an appalling affront to human dignity.

Meanwhile, another (though far less ghastly) fad in the display of corpses illustrates a similarly unhealthy attitude in our own civilization.

A Michigan businessman recently launched a company called “Eternal Image” which encourages customers to journey to the next world adorned with the logo of their favorite baseball team. “Our goal is to take everyday household-brand names and integrate the design into funeral products,” says Clint Mytych. “We want to celebrate a person’s life.”

To facilitate that celebration, Mr. Mytych offers licensed Major League funeral urns, resembling large ceramic jars of baked beans, in which the ashes of the deceased are sealed with a replica of a regulation baseball. The urn rests on its own home plate, complete with the authorized MLB logo, suggesting that the departed has successfully rounded the bases and finally scored in the great beyond, now resting, appropriately, safe at home.

“We have sold so many baseball urns because people just want it around the house – they feel nothing will better honor their loved ones,” declared Mr. Mytych, a life-long Detroit Tigers fan. He reports that the New York Yankees, Boston Red Sox and Chicago Cubs provide the decoration for the most popular urns (suggested price $799). This fall, Eternal Image will begin offering Major League Baseball caskets (starting at $4,500) for fans choosing to avoid cremation. “It’s really a beautiful thing,” Dan Biggins, co-director of a funeral home in Rockland, Massachusetts, told the Boston Globe.

It’s easy to understand how the invocation of the innocence, purity and timelessness of baseball (without disturbing reminders of A-Rod and Barry Bonds, one hopes) could lighten mournful occasions with gentle smiles, but even the most committed fan ought to question the eternal significance of his team loyalty. Sure, I love my Seattle Mariners (and I grew up as a generally heart-broken devotee of the Philadelphia Phillies), but I’d hardly want my life’s deepest significance defined in terms of these recreational enthusiasms. When the promoters of Major League Funeral Urns suggest that the bereaved feel “nothing will better honor their loved ones” than the corporate logo of a favorite commercial franchise, it seems to trivialize the earthly journey of the departed.

In his new memoir “Losing Mum and Pup,” Christopher Buckley describes the death of his famous parents and recalls that his father, William F. Buckley, wanted his ashes planted in the midst of a huge metal cross in the garden of his long-time Connecticut home. One might question the tastefulness of such an arrangement or (as Christopher Buckley suggests) the reaction of future owners of the place, but it’s impossible to challenge the essential seriousness of WFB’s desire to associate himself, for eternity, with his Lord and Savior.

The yen for immortal connection with the Red Sox or Yankees, on the other hand (not to mention the Milwaukee Brewers or Minnesota Twins) seems to undermine rather than celebrate the idea of a life of purpose and meaning.

Touring historic grave yards (like the richly atmospheric Grove Street Cemetery in New Haven) evokes a time when even the most humble citizens hoped for a sense of family, community and continuity in their final resting places. A ceramic jar with a sports logo offers an artificial connection that constitutes a poor substitute for the after-death proximity of relatives and neighbors.

No, neither baseball-themed funerals, nor the wish of football enthusiasts to see their ashes scattered at the 50 yard line of favorite stadiums, amount to the hideous affront to decency demonstrated by Gunther von Haugen’s pornographic manipulation of shellacked cadavers in coitus.

But the common element involves a dismissive, materialist attitude that views the body as insignificant—unworthy of solemnity and respect. If our corpses amount to nothing more than dead flesh—a cheap collection of chemicals, ripe for decay – then there’s no reason to object to using those remains for after-death displays of sports mania or public exhibitions of aggressive eroticism. If we make light of our opportunities and obligations in life, then it stands to reason that we’ll shrug off our fate after death.

While our ancestors may wait through eternity for the arrival (or the return) of The Messiah, some of the honored dead of the present day anticipate with similarly fervent faith and altogether irrational certainty the long-promised re-appearance of the Chicago Cubs in the World Series.