Big Lies that Poison Thanksgiving and Subvert Our Sense of Honor 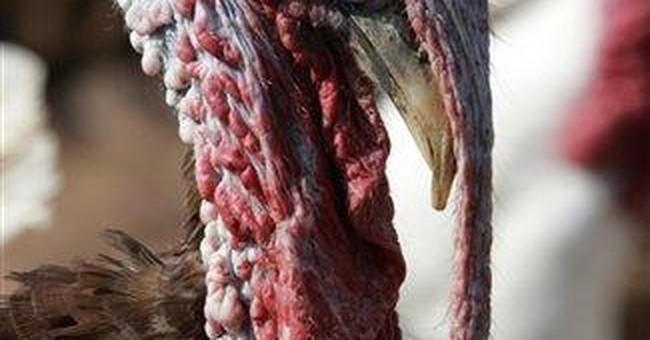 For some of Barack Obama's most ardent supporters, his resounding victory represented the first sign of redemption for a wretched, guilty nation with a 400-year history of oppression.

Filmmaker Michael Moore, for instance, considered election night "a stunning, whopping landslide of hope in a time of deep despair. In a nation that was founded on genocide and then built on the backs of slaves, it was an unexpected moment, shocking in its simplicity."

Actually, Mr. Moore's summary of America's origins is a wholly expected distortion, shocking in its mendacity.

Like so many other revered figures in the worlds of entertainment and academia, the portly provocateur thoughtlessly recycles the darkest assumptions about the generous nation that provides his privileged, prosperous life.

My new book, "The 10 Big Lies About America," represents an aggressive effort to correct the ugly smears that play an increasingly prominent (and often unchallenged) role in our public discourse.

Big Lie No. 1, for instance, concerns the ubiquitous notion that the nation's founders and builders followed a policy of "genocide" toward Native Americans.

In truth, disease caused 95% of the deaths that ravaged native populations of North America following European contact. Despite lurid (but historically baseless) claims of massive infection brought about by "smallpox blankets," even the deadliest germs displayed no consciously hostile agenda.

In fact, intermarriage (including frequent intermarriage with African-Americans, slaves and free) and assimilation caused more Indian "losses" than all occasional massacres by governmental and irregular forces — incidents invariably condemned by federal authorities, never sponsored by them.

My book's Lie No. 2 precisely anticipates Moore's claim that America was "built on the backs of slaves," suggesting that our wealth and prosperity came chiefly through the stolen labor of kidnapped Africans.

While slavery represented an undeniable horror in our nation's early history, the slave population never exceeded 20% of the national total (amounting to 12% at the time of the Civil War). This means that at least 80% of the work force remained free laborers.

The claim that our forefathers built America "on the backs of slaves" rests on the idiotic idea that involuntary servitude proved vastly more productive than free labor. In fact, the states dominated by the slave economy counted as the poorest, least developed in the union — providing the North with crushing economic superiority that brought victory in the War Between the States.

Of more than 20 million Africans taken from their homes in chains, at most 3% ever made their way to the territory of the United States (or the British colonies preceding our nation). Americans played no part in establishing the once-universal institution of slavery but played a leading, outsize role in bringing about its abolition.

Other lies about America's past badly distort current debates over public policy. It's not true, for instance, that governmental activism provides a necessary remedy for periodic economic downturns (Big Lie No. 6).

In fact, leaders who courageously resisted the temptation of major federal initiatives at times of crisis presided over shorter, less painful recessions, while the ambitious innovations of Hoover and FDR worsened and prolonged the Great Depression. (Even liberal historians admit that the New Deal never worked as "a recovery program.")

Meanwhile, the popular assumption that our founders determined to create a secular, not a Christian, nation (Big Lie No. 3) has produced widespread hysteria over the program of "the Christian right."

In fact, the constitutional framers insisted on a combination of a secular government and a deeply Christian society. Even Jefferson, an unconventional religious thinker, believed that fervent faith represented a necessary element in the security and growth of the republic; he personally attended and authorized weekly Christian services in the Capitol building itself.

Secular militants, not Christian conservatives, currently strive to transform America in a way our founders would neither recognize nor approve.

Unfortunately, some of the same religious conservatives who get it right about the place of organized faith in the American fabric get it terribly wrong by signing on to Big Lie No. 10: that the United States has entered into a steep — and irreversible — moral decline.

In fact, a wealth of statistics concerning marriage, teenage sexuality, drug addiction, crime, alcohol abuse and other signs of social breakdown show a recent, decisive turnaround that may represent one of the nation's periodic "awakenings." Moralists have proclaimed permanent ethical collapse ever since 1645, yet no one could claim that our path has been straight downhill for 350 years.

The big lies about America all work to undermine the sense of honor and gratitude that ought to inspire every citizen, particularly in this Thanksgiving season. They also destroy the essential sense of perspective required in significant debates as a new government comes to power in Washington, D.C.

While Sen. Obama's supporters rightly rejoice at his election to the nation's highest office, they will disorient his presidency and damage society if they embrace destructive distortions about our past, and view his elevation as a rare (or exclusive) basis for pride.