The Candidate As Cult Leader 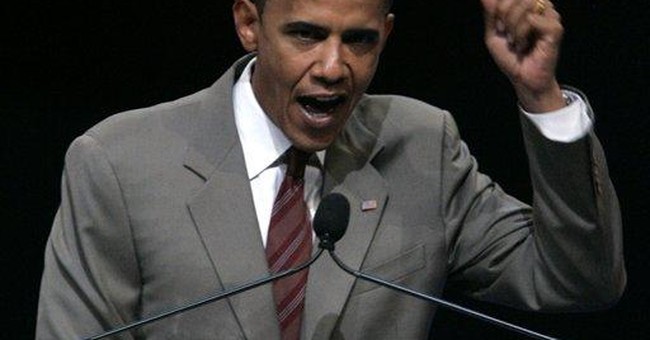 Under the headline “Obama Supporters Take His Name as Their Own,” the New York Times reported on a bizarre fad among the candidate’s enraptured acolytes: across the country, they’ve begun adopting his middle name, Hussein. “The result is a group of unlikely sounding Husseins,” writes reporter Jodi Kantor, “from Jaime Hussein Alvarez of Washington, D.C., to Kelly Hussein Crowley of Norman, Oklahoma, to Sarah Beth Hussein Frumkin of Chicago.”

One of the key elements in many religious cults involves a name change – like transitioning from Richard Alpert to Baba Ram Dass, or from Malcolm Little to Malcolm X. To Obama’s true-believers, adding an Islamic middle name is a small price to pay for connecting with a candidate who qualifies as a “lightworker” and “an enlightened being,” according to San Francisco Chronicle columnist Mark Morford.

“Many spiritually advanced people I know,” he writes, “identify Obama as a Lightworker, the rare kind of attuned being who has the ability to lead us not merely to new foreign policies or health care plans or whatnot, but who can actually help usher in a new way of being on the planet, of relating and connecting and engaging with this bizarre earthly experiment. These kinds of people actually help us evolve. They are philosophers and peacemakers of a very high order, and they speak not just to reason or emotion, but to the soul.” (Italics in the original)

Author Garen Thomas makes similar observations in “Yes We Can: A Biography of Barack Obama”, a newly published book for children. “There has emerged a new leader who seems to be granting Americans a renewed license to dream. Barack Obama has proven repeatedly that he can touch people from all genders,” (not just both of them, you’ll note, but all of ‘em), “political affiliations, and across racial divides. There are few times in your life when you have a real opportunity to alter the course of history and put civilization back on a course toward prosperity and unity for all races and genders.” All of them—again. “If you were to look at dates in your history books, you might see centuries pass before something remarkable and worth noting occurred, when one person or a group of people stood up for change, making an enlightened leap in the evolution of the human story.”

Among those willing to make precisely that sort of “enlightened leap” is the 1980’s “Culture Club” star, the inimitable Boy George, who wrote his latest song to honor “the enlightened being” from Illinois. The chorus proclaims “Yes We Can/Make it to the Promised Land,” but Boy George himself couldn’t quit make it to the promised land of the United States due to visa problems regarding his history of drug busts.

Nevertheless, others who did manage to bask in the actual presence of The Lightworker described the experience in terms calling to mind the knock-kneed awe of Dorothy and friends as they tremulously approached the Great Oz. The Los Angeles Times quoted actor Eric Christian Olsen as saying: “Nothing is more fundamentally powerful than how I felt when I met him.” Nothing, Mr. Olsen? Not your love of your wife or your partner or your parents or your country, or the death of your dog or the visit of Pope Benedict or the Red Sox winning the series? Nothing more powerful than meeting Obama?

Describing the thrill of his all-too-fleeting encounter with the Hope Pope, Olsen continued: “I stood, my hand embraced in his and…I felt something…something that I can only describe as an overpowering sense of Hope.” (capitalization in the original).

Reading through numerous similar accounts, I, too, felt something….something that I can only describe as an overpowering sense of … embarrassment.

How can intelligent and responsible people fall for this mass hysteria over a politician whose only real accomplishment in 47 years of living has been to build up the mass hysteria and messianic expectations surrounding this campaign? When I was in high school, I remember feeling puzzled and bemused by the similar frenzy surrounding the hip new British band, the Beatles. Yeah, they were great musicians and their clothes and hair cuts looked indisputably cool, but it still seemed hard to explain the smart teenaged girls I knew who flocked to see them at the Hollywood Bowl and ended up shrieking to the point of hoarseness, while weeping and, literally, wetting themselves in an orgy of adulation.

The difference, of course, is that we can still listen to Beatles songs with pleasure and satisfaction some forty years later, but it’s doubtful that any Obama speech (let alone his fumbling, bumbling off-teleprompter interviews) will thrill anyone even next year.

As with other moments of religious and quasi-religious frenzy, it’s not what the candidate is saying, or the proposals (what proposals, exactly?) he’s making, or even Obama himself that creates the manic energy surrounding his campaign. It’s the phenomenon itself, the crazed delirium of the Oba-maniacs, that compels attention, even fascination. Some people went to those first Beatles concerts as much to watch the tearful, hysterical, hollering adolescent girls as to hear the music; in fact those screaming sweeties usually drowned out the performances on stage so crowds couldn’t even hear the tunes and lyrics. It didn’t matter for the participants, who cared only about the transcendent excitement, the mass delirium, of the historic experience.

So, too, the messianic yearnings and wild-eyed, zombie-like devotion of Obama’s unhinged followers comes across as far more exciting and significant than the surprisingly pedestrian and platitudinous substance of his actual campaign. For the candidate as cult leader, it’s not the message; it’s the moment.