Yes, Virginia, There is A Military 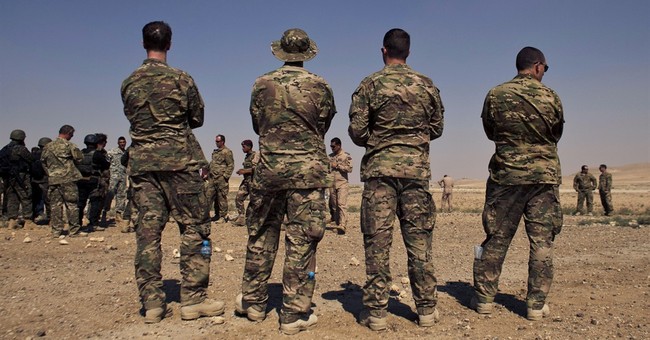 Two weeks ago artwork I had submitted for a billboard at a very upscale Los Angeles mall was rejected by the property owner because the images could potentially be “controversial” as well as might “raise eyebrows,” especially (as I was informed via email) during the mall’s upcoming Christmas tree lighting ceremony. What were the objectionable images the mall found so troubling? American soldiers, sailors, airmen and marines.

The mall’s response was even more astounding to me because the supposedly controversial images were cartoon artwork from the cover of my illustrated children’s book “The Night Santa Got Lost: How NORAD Saved Christmas” (sold, ironically, at the Barnes & Noble at the objecting mall). The book tells the story of the joint U.S. and Canadian North American Aerospace Defense Command’s history of tracking Santa by planes, satellite and radar on his Christmas eve flight -- a holiday tradition enjoyed by 20 million people around the world.

Every year hundreds of military servicemembers and civilians volunteer to field over 100,000 phone and email inquiries from children in over 220 countries and territories, many of which are puzzlers deemed too tricky by their harried parents: How can Santa circumnavigate the world in one night? We just moved to a new home, will Santa be able to find us? Our home doesn’t have a chimney, how will Santa get in? And the perennially feared, Does Santa Claus really exist? The calls can also be heart-rending: What time are presents delivered to heaven? one boy asked before his mother explained that his older sister had died earlier that year.

The mall eventually reversed their decision and apologized to me explaining that they had merely been completely unaware of the NORAD Santa tracking tradition. (I suspect they may also have reasonably concluded that they would be courting more controversy by rejecting the ad.) But I believe the mall’s initial negative reaction reflected not so much any outright hostility toward the military as much as it betrayed a certain uneasiness borne out of a lack of familiarity with military service and its unique customs, rituals and traditions.

My military friends have related their own Borat-like encounters with civilians in Los Angeles, interactions that have often been comically off-key. When a prominent female entertainment executive was introduced to a female Army sergeant, the executive took a step back, looked admiringly up and down at the soldier’s boots and camouflage uniform and exclaimed, “I love your outfit!” Another friend, an Army Ranger, was stopped on the street by a young boy insisting on knowing where he had purchased his “costume.” As many veterans can attest, these conversations then often-times lurch forward, ricocheting between small talk awkwardness – I bet it was hot over there – to the breathtakingly cringeworthy – How does it feel to kill someone? (For more examples, see the YouTube video, “Sh— People Say to Veterans.”) Veterans are inclined to receive these clumsy, but well-intended, comments with a detached bemusement, understanding that they reflect a citizenry increasingly lacking any familiarity with the rhythms and rituals of military life.

It would be easy to dismiss the mall’s initial rejection of my billboard as peculiar to Los Angeles, a kind of perfect storm of a city with decidedly liberal sensibilities and little military presence, where a person in uniform is more likely to be an extra from a movie set than an actual GI. In reality, however, I think it is symptomatic of a growing gulf of experience nationwide between the civilian and the soldier, in an era when only half of one percent of Americans are serving in uniform. This divide of experience, difficult enough to bridge in peacetime, becomes perhaps an impassable chasm with a military chastened by 14 years of war.

Peel back the breezy platitude “Thank you for your service” and there is an awkwardness and lingering uneasiness harbored by many civilians toward military veterans fueled perhaps by the stigma of post-traumatic stress and alarming statistics of veterans’ suicides. Veterans can be just as wary of those who have never served in uniform: How can people express sincere gratitude for something that they don’t understand? How can you be grateful for something that you haven’t experienced?

Two years ago the NORAD Santa tracking tradition sparked a controversy when a children’s advocacy group objected to the depiction of military aircraft carrying bombs escorting Santa’s sleigh. The “bombs” were actually external fuel tanks, but in a sense that squabble typifies the growing civilian and military divide where those who don’t serve lack as much knowledge of military hardware as they do of military service. This Felix Unger-Oscar Madison dichotomy is amusing in a sitcom but potentially dangerous in a democracy.

To many Americans, the military is seen like a sort of Santa Claus – seemingly more mythological than real, wrapped in a mystique as alluring as gold and silver wrapping paper, welcome at a certain season (or time of crisis) but at other times as out of place as a Christmas tree in July. Like Virginia, the young girl who famously wrote to the New York Sun newspaper over a century ago inquiring if Santa Claus truly existed, Americans seem increasingly mystified by their own military (or even images of it). A suggestion for breaching this widening moat between civilians and those in uniform this Veteran’s Day...instead of thanking a veteran for their service, ask them about it.