Dem Memo To the Rich: We Need Your Money But We Hate You 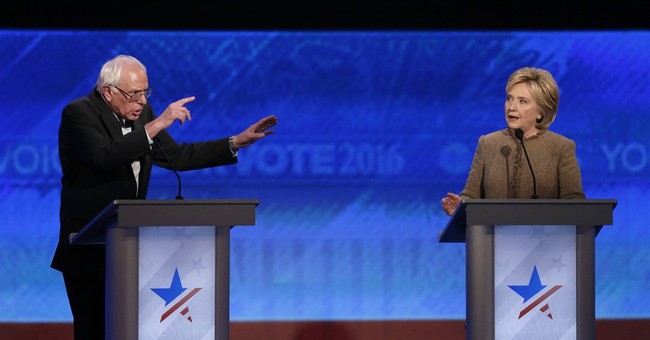 I wasn’t going to watch the debate and still haven’t seen any of it. But I couldn’t resist trolling through the #DemDebate Twitter feed and I got enough of a flavor to know I made the right choice.

The writer Walter Olson may have made the best comment, as the debate began, with this tweet: “Every election is a sort of advance auction sale of stolen goods.” -- H.L. Mencken ?#DemDebate?#Cato2016

The Democrats are putting themselves in the strangest of places with regards to the wealthy and the big earners in the country. To enact all of the various things that must be done to save the country they want to do, there needs to be a bunch of money coming in. Even the progressive left has to admit, however resignedly, that money doesn’t grow on trees. Money must be made somewhere. But it seems that they really don’t like it.

Hillary Clinton said this: “We don't have enough oversight of what the insurance companies are charging everybody right now.”

Of course, the context is healthcare but the general approach to commerce is clear. The government apparently should be in the business of controlling prices if the results are not what Mrs. Clinton thinks they should be. That is not going to get her the money that she desperately needs to fund her agenda.

Sanders’ point of attack on making money is at the motivation level. Greed is bad. The problem here, of course, is that greed is just a whiny alternative word that Sanders uses for self-interest. My iPhone is not the result of othercenteredness. It’s the result of a company that is voraciously pursuing my dollars for profit.

Adam Smith wrote this the year we declared independence from England and it absolutely still true to this day: “It is not from the benevolence of the butcher, the brewer, or the baker that we expect our dinner, but from their regard to their own interest.”

I bought steak and ice cream from Whole Foods market this evening, but not because they care about me and worked hard to do me a favor. They’ve got shareholders to satisfy and quarterly profit targets to hit. As a result of this motivation, they gave me the option to hand over my hard-earned dollars in exchange for some wonderful stuff. On the other side of the same coin, I didn’t give them my money because I have warm and caring feelings about them; I gave them my money because I was hungry for great food.

Bernie doesn’t get this. At all. He gave further evidence of his utter lack of understanding when he said, “There has been a transfer of trillions of dollars from the middle class to the top 1/10 of 1%.” In Sanders’ mind, rich people somehow wave a magic wand and everyone throws dollar bills at them, against their will.

The message he is sending is basically this: “We need your money but we don’t like you; and we know you’ll end up hating us, too.” If Ayn Rand were writing “Atlas Shrugged” today, she’d be able to lift full speeches from Sanders and pop them right into the narrative with nary an edit.

A friend of mine Tweeted this and it is exactly on point: “The notion rich people are just hoarding money and government can put it to better use than those who made it is a toxic fallacy.”

Surprisingly, Martin O’Malley does seem to somewhat understand the issue, saying, “We're not going to fix what ails our economy by...trying to replace American capitalism with socialism.” I doubt he’d agree with my opinion that we need even more pure free-market capitalism to fix our economy, but at least he put some sort of stake in the ground.

Hillary and Bernie seem to also have the idea of rights completely upside down, as well. She warned that if a Republican wins, then a lot of rights will be “at risk.” Presumably, she does not mean gun rights.

Sanders questioned why the United States remains the "only major country on Earth that doesn't guarantee health care to all people as a right.” The simple answer is that a right cannot be something that requires action or money from someone else.

Fortunately, at least so far, America has refused to force some Americans – doctors – to perform services for others or to take money from Peter to pay Paul’s doctor. If this changes and medical care does become a right, the result will be to totally change the definition of the concept.

There was one statement that did make me laugh out loud and Hillary delivered it: "I am not giving up on Libya and no one should."

This kind of goes with out saying, but I’m not sure that many Americans would give her “not giving up” efforts in Libya a big thumbs up.

Based upon the picture of the debate I received from my news feed, I won’t be giving a big thumbs up to anything else she, O’Malley, or Sanders had to say, either.