Michael Hammond
|
Posted: Feb 23, 2016 12:01 AM
Share   Tweet
The opinions expressed by columnists are their own and do not necessarily represent the views of Townhall.com. 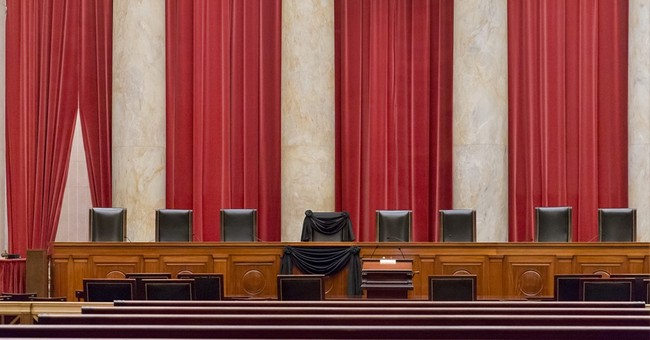 ONE: Barack Obama's pulling the same scam he pulled with the Toomey-Manchin gun control package.

Remember the State of the Union refrain: "They deserve a vote!"?

So the gullible Republicans gave "them" a vote.

We won, by the skin of our teeth -- no thanks to the Republicans' partial surrender. (Had Lisa Murkowski flaked, there is no doubt that Reid would have picked up the four "swing Democrats" he had in reserve and achieved victory.)

But the GOP paid a horrible price for letting the process go further than it should have gone. Kelly Ayotte, Dean Heller, etc., spent a year fending off "victims" who ambushed them at Town Hall meetings -- victims who were encouraged into action by the fact that some Republicans had caved in to the "They deserve a vote" narrative and let the process go forward.

If the GOP caved the first time, they reasoned, unrelenting pressure could cause them to cave again.

We are now facing another "They deserve a vote!" scenario in connection with Antonin Scalia's seat.

And caving into Obama at the beginning of this process is not going to bring one scintilla of respite from either Obama or the press.

TWO: Barack Obama understands that every incremental advance in the process -- starting with an agreement to hold hearings -- creates incremental victories which feed momentum.

THREE: Every incremental advance in the process makes it parliamentarily easier to force a successful vote on confirmation. After the hearings, Reid will simply move to discharge the nomination. If he succeeds in discharging, he will try to "nuke" cloture on the vote on confirmation. With victory achievable with 50 votes (plus Biden), Dems would only have to pick off four RINOs.

Incidentally, for those who don't think it makes any difference whether the Judiciary Committee holds hearings or not, I would ask this: Would you rather be on your own 10-yard line or your opponent's?

FOUR: Every incremental advance in the process makes it easier for the press to continue to focus on the story.

If nothing happens, eventually the press will be forced to drop it. But not if Republicans continue to create the "story."

FIVE: Every incremental advance in the process allows Obama to "put a human face" on the nominee.

Of course, the veteran who goes to prison after a VA gun ban -- because his wife kept a gun for self-defense -- will never have a "face" in the media. Neither will his family.

SIX: The longer the nomination remains an issue, the easier it will be to pick off Republicans.

And the easier it will be to inflict pain on Republicans.

SEVEN: Republicans have thus far shown NO capacity to explain the stakes.

As four different law professors told the New York Times in an article Friday, if Obama appoints a successor, the Second Amendment will be effectively repealed.

Abortion will be legalized to the ninth month -- and Little Sisters of the Poor will be forced to fund it.

The coal industry in Western Pennsylvania and Eastern Ohio will be shut down.

If Senate Republicans cannot understand the political utility of saying that a vote for Ted Strickland, Maggie Hassan, or Russ Feingold is a vote to effectively repeal the Second Amendment -- in its entirety -- then it's not hard to understand why Donald Trump is running rings around them.

Forget whether Anthony Kennedy's 1988 confirmation confirms an 80-year precedent or defies it.

If Clinton wins, we will be calling for a defeat of her nominees as well.

Rather, the issue is whether the most lawless president in history is allowed to appoint a lawless puppet judge to rubber-stamp his lawless actions.

Like Kagan and Sotomayor, Ginsburg and Breyer, the nominee would lie (seductively) about having no opinion about the Second Amendment.

But as at least three of these liars made clear in the McDonald case, they have a very firm opinion. And the opinion is that Heller should be reversed and the Second Amendment should be ripped from the Constitution.

There will never be an "appropriate" time for this.