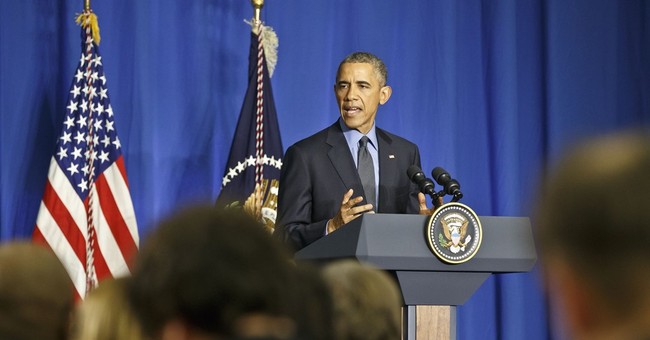 If we have learned anything about legislation over the past fifty years, it's that pleasant-sounding legislative statements can be used by the courts and by the Executive Branch to spin complex and intrusive regulatory regimes. Title IX (sex discrimination in schools), the National Environmental Policy Act (environmental impact statements), Title VII (affirmative action), and the Individuals with Disabilities Education Act (expansive and dangerous educational services for bad children) all took nicey-nice legislative language, which seemed innocuous at passage -- and used it to massively enhance the role of the courts and the Executive Branch.

So what are we to make of the Labor and Environmental commitments, which the U.S. would make under the Trans-Pacific Partnership (TPP)?

We know that Barack Obama has been working feverishly to establish liberal policies in these areas, and has thus far been thwarted by Congress. We also know that the TPP, if approved by Congress, would have, at the very least, the force of statute.

We know that Obama would like to leave an irreversible legacy in the areas of labor and the environment. And we know that he has been endlessly creative -- often to the point of illegality -- in devising means to sidestep congressional gridlock.

So what are we to make of language in Article 19:3 that "Each Party [and the U.S. would be a "party" upon approval] shall adopt and maintain in its statutes and regulations, and practices thereunder, the following rights...” The effective recognition of the right to collective bargaining…”?

Or this in the same article: "Each Party shall adopt and maintain statutes and regulations, and practices thereunder, governing acceptable conditions of work with respect to minimum wages...”?

Although "organizing" and "minimum wage" "rights" may have been laid out in the International Labor Organization Declaration, this new commitment to adopt new statutes, regulations, and practices gives Obama (and perhaps Clinton) power beyond anything they currently have to set a minimum wage and dramatically expand union "rights." And the decisions concerning the breadth of their powers would be made by Obama-packed courts.

Furthermore, Article 19:4 (Non Derogation) attempts to make it illegal to "weake[n] or reduc[e] the protections afforded in each Party's labour laws."

Given that a statute can empower the administration to set the minimum wage and set union organizing specifics -- and given that the TPP would have the force of statute -- and given that the TPP specifically mandates that an acceptable minimum wage and effective labor rights be set by statute and regulations and practices, is anyone foolish or brazen enough to argue that this language does not give Obama and Clinton the right to set these things through executive action?

The article in the environment is equally troublesome.

The "general commitments" in Article 20:3 include, among other things, the obligation of each party to "strive to ensure that its environmental laws and policies provide for, and encourage, high levels of environmental protection..."

As broad as it is, this is a far clearer authorization of environmental executive action than the predicates, which Obama is currently using to attempt to regulate CO2 emission and coal-fired plants.

George Will has opined that it is "over climate change that Congress will finally find its footing and say ‘Executive power stops here.’”

But for Congress to stop executive abuse of power, it will first have to stop delegating that power.

So here's where we are: Under the Trade Promotion Authority bill passed earlier this year, Congress must pass all of the TPP or totally reject it. Given the TPP's delegation of broad executive power over the minimum wage, labor law, and the environment, Congress should reject it.