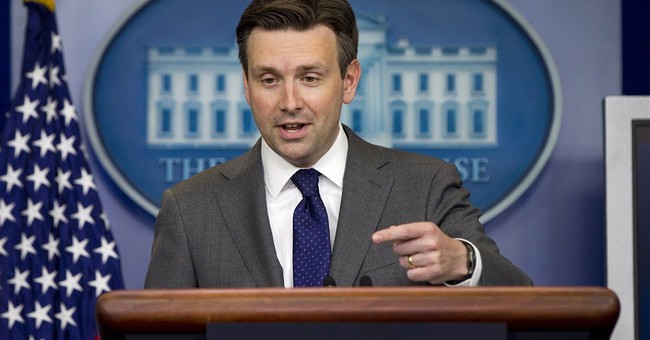 MYTH #1: Comes the May 18 edition of the Wall Street Journal with this pronouncement:

The sorriest excuse not to support freer trade is [that Republicans] don’t trust Obama. We don’t either but the language of the fast-track bill makes clear he cannot use it unilaterally to supersede American law.

Once again, the WSJ has been outwitted by the cagey Obama.

I have no proof that this statement comes straight from the White House “war room.” But it certainly sounds Obama-esque, coming with equal measure of ignorance, arrogance, and dishonesty.

It doesn’t take much intelligence to realize that this language is a big, fat, hypocritical, useless, deceptive, “nothing-burger.” Here’s why:

FIRST, the problem, generally, is NOT that new pro-union provisions – or new “global warming” regulations – or new gun control – or new immigration rules – are “inconsistent with [U.S.] law.” They aren’t.

The problem is that they would do things that Congress has simply not chosen to do yet.

The sole exception in this list is immigration, in which statutory law seems to explicitly bar naturalization of certain persons. BUT NEWS ALERT: If Obama doesn’t think this stature bars him from granting amnesty by executive fiat, then he isn’t going to believe that immigration statues are inconsistent with “amnesty by trade agreement.” And the Second Circuit’s interpretation of stature isn’t going to save us from that possibility.

SECOND, a trade agreement, when approved by Congress, and signed by the president, becomes THE LAW OF THE LAND. It doesn’t supersede provisions in the Constitution which explicitly prohibit an act. But, under Missouri v. Holland, it allows the government to do things it couldn’t otherwise do. And, under standard legal constructs, is supersedes previous law which is incompatible with it. So here’s a brain teaser: How do the courts come out when pitting an agreement which is automatically preemptive of U.S. law against a provision which it would automatically trump, but for provision saying it doesn’t trump U.S. law?

THIRD, it is statutorily impossible to draft a statute which prohibits Congress from changing the law in the future – although the “death panel” provisions of ObamaCare attempt this. So saying a trade agreement can’t prohibit future legislation is a big, fat nothing.

One columnist even quoted a 19th Century “scholar” who, using “Malthusian math,” “demonstrated” that trade was an inherent good.

America certainly benefited from restrictive trade policies which choked off the Soviet empire.

Conversely, when China joined the WHO, it is widely perceived that the PRC used that to thrust its economy ahead of ours. China allows investment, but only when it benefits China. And, with its new crackdown, the PRC is now using its economic strength to threaten the U.S. militarily in connection with disputed waters.

Trade apologists cite job gains, but they usually don’t cite “NET” job gains. And, whatever other benefits we have gotten from trade, the elimination of our “Rust Belt” industries is not an unabated good. Except for the K-Street “sell them the rope” crowd.