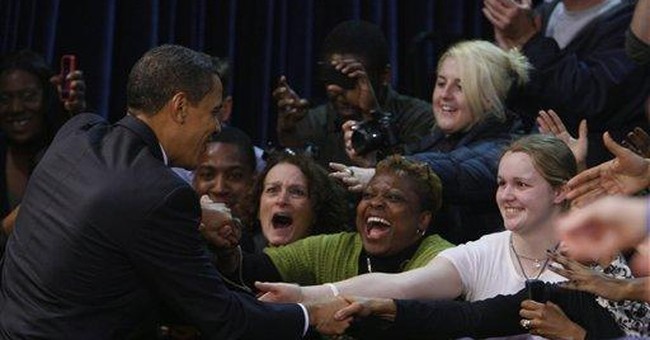 WASHINGTON -- Whatever the legislative fate of health reform -- now in the hands of a few besieged House Democrats -- the health reformers have failed in their argument. Their proposal has divided Democrats while uniting Republicans, returned American politics to well-worn ideological ruts, employed legislative tactics that smack of corruption, squandered the president's public standing, lowered public regard for Congress to French revolutionary levels, sucked the oxygen from other agenda items, re-engaged the abortion battle, produced freaks and prodigies of nature such as a Republican senator from Massachusetts, raised questions about the continued governability of America and caused the White House chief of staff to distance himself from the president's ambitions.

It is quite an accomplishment. For the president, it must also be quite a shock, because he thought he was taking a reasonable, middle path on health reform.

At the start of this process, many Democrats preferred a single-payer health system -- essentially, Medicare for everyone. Short of this goal, they advocated a public option that would compete with private insurance companies and prove the superiority of government-run care. But President Obama rejected a single-payer approach and signaled early that the public option was expendable.

Obama also rejected the one, genuinely bipartisan health reform proposal -- made by Sens. Ron Wyden, D-Ore., and Bob Bennett, R-Utah -- that would have ended employer-based insurance and given individuals a deduction to buy their own coverage from a menu of private insurance options. (Wyden has turned out to be the ignored prophet of the health debate. "If you ... just pound it through on a partisan vote," he said last June, "you have people practically as soon as the ink is dry looking to have it repealed.")

Instead, the president chose the current complex, regulatory approach to reform, precisely because it seemed less radical and disruptive than the other options. It was patterned in part on health reforms in Massachusetts signed by then-Gov. Mitt Romney, a Republican, thereby applying at least a veneer of bipartisanship.

So what went wrong? Some analysts blame structural factors, particularly the growth in partisanship. It is true that the Republican caucus in Congress has become more homogeneous in its conservatism. But it is also true that Obama is advocating a serious expansion in the role of government at a moment when skepticism of government is widespread. His health reform plan may have seemed moderate on the congressional ideological spectrum. But the creation of a new middle-class entitlement can't be considered moderate in the context of the times when even previous entitlement commitments seem unsustainable. And it has not helped that the Massachusetts model of health reform has resulted in unchecked cost increases, requiring higher taxes and benefit cuts. These financial concerns not only unify Republicans of every ideological stripe, they reach into the right of the Democratic coalition.

In fact, these structural obstacles were increased by a major strategic miscalculation. Obama clearly believed that the economic crisis was fully fungible -- that a turn to government activism in one policy area would translate into support in other areas. So he attempted a rhetorical sleight of hand, arguing that economic recovery required health reform and a cap-and-trade system for carbon emissions. Few bought it. To the contrary, the massive -- and, in my view, necessary -- bank bailout only increased public skepticism about government and congressional concerns about spending.

The final reason for Obama's failed argument on health reform is neither structural nor strategic. It is psychological. As the evidence mounted that the body politic was rejecting Obama's health system transplant, Obama faced a choice about the nature of his presidency. He could retreat toward incrementalism or insist on transformation. Obama had previewed his impatience with incrementalism during the campaign. Similar to his predecessor, George W. Bush, Obama turned hard against the Clinton model. "I think Ronald Reagan changed the trajectory of America," he said, "in a way that Richard Nixon did not and in a way that Bill Clinton did not. He put us on a fundamentally different path because the country was ready for it."

In retrospect, Obama's greatest achievement during the 2008 campaign was to combine soothing reassurance with a message of transformational change in a single political persona. Governing, however, has required a choice between reassurance and transformation.

Because Obama has chosen liberal transformation, the political outcomes are now limited: He can appear radical in victory or weak in defeat. Given his health reform decisions, it is no longer possible for Obama to be a president both strong and unifying.