A Year of Lullabies 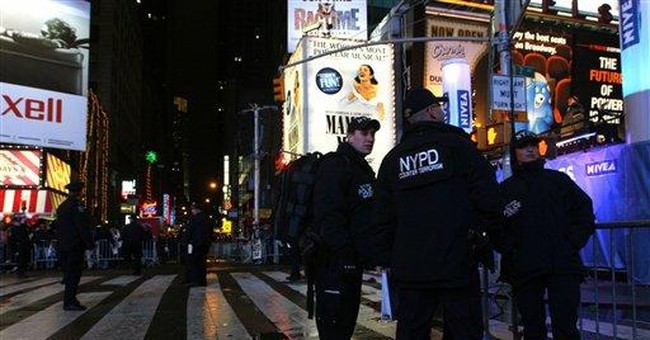 WASHINGTON -- The word "vigilance" is sometimes mocked as reactionary and jingoistic. As in: "We must be vigilant to protect the homeland during this duck-and-cover drill against communists under every bed because loose lips sink ships."

But the failures in the war on terror during the last few months have been failures of vigilance. After warnings to American officials from his father, a radicalized Nigerian with ties to Yemen -- holding a one-way ticket and no luggage -- is allowed on a plane headed to Detroit. A man in Afghan military fatigues -- covering a bomb vest -- enters a CIA base in Afghanistan for an intelligence debriefing, without being screened. An Army psychologist -- with a history of making provocative jihadist arguments and known to classmates as a "ticking time bomb" -- is assigned to Afghanistan and reports for processing at Fort Hood.

In all these cases -- whether in the State Department, the CIA or the U.S. Army -- some internal guard was lowered. Following the Christmas attack, Homeland Security Secretary Janet Napolitano concluded, "One of the things that may come out of this awful day is perhaps a renewed sense of urgency."

Her statement is a confession that vigilance has faded over time. Some of this is a natural process -- a human desire for normalcy, the tendency of civilized people to repress unpleasant realities. Vigilance is like a knife that dulls when it is not used.

Which is precisely why vigilance requires leadership. Urgency is either sharpened by rhetoric and expectation -- or it is sharpened by tragedy.

A president can't be held responsible for every mistake at every level of government. But every level of government takes its cues from the president and his main advisers. And it is difficult to argue that the Obama administration has even attempted to create an atmosphere of urgency in the war on terror. The listless, coldblooded and clueless response of the Hawaii White House to the Christmas Day attack was only the most recent indication. Over the last year, nearly every rhetorical signal from the administration -- from the use of war-on-terror euphemisms such as "overseas contingency operations" and "man-caused disasters" to its preference for immediately categorizing terrorism as the work of an "isolated extremist" -- has been designed to convey a return to normalcy, a contrast to the supposed fear-mongering of the past.

Add to this the Holderization of the war on terror. Attorney General Eric Holder began his work not with a high-profile assault on al-Qaeda but with a high-profile assault on the CIA -- making clear to every ambitious officer that counterintelligence is a dead end of recrimination and legal bills. And now both the mastermind of 9/11 and the underwear bomber are headed toward celebrity trials. According to White House terrorism adviser John Brennan, the decision to prosecute Umar Farouk Abdulmutallab in civilian court was made almost immediately by the Justice Department -- though the president now concedes that "al-Qaeda in the Arabian Peninsula trained (Abdulmutallab), equipped him with those explosives and directed him to attack that plane headed for America."

This civilian prosecution strategy would make sense if the goal is punishment for an attempted mass murderer. But it makes no sense if the goal is vigilance in the war on terror -- gaining information to prevent future attacks. Abdulmutallab evidently talked a bit with FBI investigators when first captured. But any defense lawyer -- and now he has one -- will urge him to withhold information for use in bargaining with prosecutors down the road. The reality here is simple and shocking: A terrorist with current knowledge of al-Qaeda operations in Yemen has been told he has the right to remain silent.

As a foreign terrorist, he does not have that right (as even the Obama administration has conceded by its use of military tribunals in other cases). And granting Abdulmutallab that privilege only because he tried to commit murder on American soil is an incentive of disturbing perversity.

President Obama has forbidden waterboarding. But he has not, to my knowledge, forbidden the interrogation of enemy combatants who have current information on terrorist networks.

The president has occasionally talked of a war on terror. But lip service is different from leadership. In the war on terror, 2009 was not a year of urgency and vigilance. It was a year of lullabies, hot toddies and Ambien -- though it nearly ended with a bang.